Fabio Quagliarella: The Serie A legend forced to make up for lost time 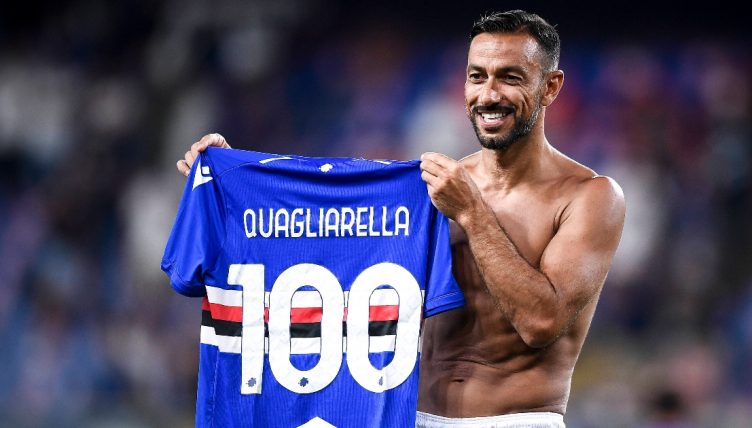 Fabio Quagliarella’s move to Napoli in 2009 was supposed to be the striker’s crowning moment. Ten years into what would become an illustrious career, the local lad had returned home, intent on taking his boyhood club to a first Scudetto since 1990.

The story was written but after just one season, the manuscript was torn up. The striker born in Castellammare di Stabia found himself forced out of the area after a stalker and a member of the local police force started to ruin his life.

What began as a simple cyber security issue, solved by the police officer in question, soon escalated into attempts to frame Quagliarella for heinous crimes, threaten his life and his family. A move to Juventus was forced through in the summer of 2010 due to growing fears for his safety, but because the case went unresolved for a further four years, the Napoli fans he so adored saw the move as a betrayal.

“I always had imagined myself as captain of Napoli; of winning something with them because they were becoming as good a team as they are now – a great team,” Quagliarella told Mediaset in 2017 after his tormenter had finally been sentenced to four years in prison.

“If none of this had happened. I am certain I would still be playing there now.”

No blame could have been placed at the feet of the striker had this incident derailed what was already an impressive career. Instead, it seemed to spur him on. Attempt to ruin Quagliarella’s life? He’ll simply drive that career on to legendary status. One that will make your jail cell glow bright green with envy.

With the police officer still active and threatening the striker’s friends and family back in Napoli, Quagliarella’s struggled for consistency in Turin: for both Juventus or Torino.

In six years and 166 appearances across both spells, he scored 52 goals. An admirable total given the personal circumstances around which he was asked to perform. Even after his stalker was arrested and awaiting trial, Quagliarella was unable to go out in Napoli without receiving abuse from his former fans. No details had been made public over the arrest given the nature of criminal trials in Italy.

Eventually, the truth would out. After the police officer was sentenced, Quagliarella was able to speak. He openly admitted that talking about the situation in the time after the trial was tough, but something that needed to be done. The unfurling of a banner by Napoli ultras in a clash against Crotone at the San Paolo seemed to lift a weight from him, a rare moment of humility from a group often seen as toxically macho: “You’ve lived through hell with enormous dignity,” it said. “We will embrace you again, Fabio, son of this city.”

The following two seasons proved to be two of the most prolific of his career. In 2017-18, the striker found the net 19 times in Serie A, a total bettered a year later. 2018-19 brought with it 26 league goals and a golden boot, meaning, as a 36-year-old, Quagliarella had outscored Cristiano Ronaldo – a man who had previously bemoaned how difficult finding the net in Italy can be.

It was a season that even saw Quagliarella equal Gabriel Batistuta’s record of scoring in 11 consecutive Serie A matches: “It’s unthinkable. I get emotional because just to be able to imagine something like that. Just naming Batistuta gives me goosebumps,” a teary Quaqliarella told Sky Italia after the match with Udinese.

For a while, there was a sense that Quagliarella would simply keep playing forever; that he would keep scoring more and more goals of higher and higher quality until it caused the ex-police officer to combust with jealousy behind bars. There were even rumours that Andrea Pirlo would bring his old Azzurri team-mate into his Juventus set-up this summer before he was replaced in the dugout by Max Allegri.

But the realities of being a 38-year-old in one of Europe’s elite leagues have finally set in. The striker revealed in July that he had started working towards his coaching qualifications and, although he has not yet decided for sure, the 2021-22 campaign could be his last as a player.

“I don’t know when, but I don’t think it’s far away,” Quagliarella recently said in a press conference of his retirement.

“I’m not saying today that the next championship will be the last, we’ll evaluate in the middle of the season.”

So the last dance of one of Italian football’s great goalscorers could soon be choreographed. He brought up goal number 100 for Sampdoria with a flick of typical genius in a Copa Italia clash with Alessandria to get the season underway in style. But there could be more to come.

Were he to equal last season’s goal tally, Quagliarella would find himself climbing above his hero Batistuta in Serie A’s all-time goalscorer’s list, surpassing Alberto Gilardino and Alessandro Del Piero too.

Matching his Capocannoniere-winning tally of two years ago (26) would take him to within just two of Roberto Baggio and make him just the eighth player to ever score 200 goals in the division. There is every chance he would have already passed that milestone had he not been forced to play over five seasons of his career with the weight of a stalker around his neck. Talk about making up for lost time.

But for a player who has suffered more than most, what an achievement it would still be to reach it. Forza, Fabio.