After failing disabled fans for so long, are Prem clubs finally putting it right? 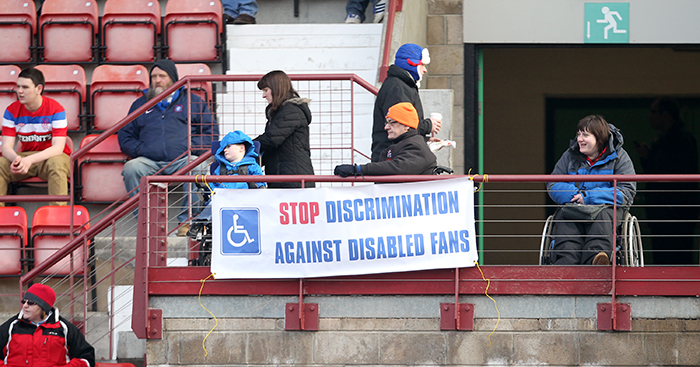 While this summer has been notable for several mind-boggling transfers, it has also been significant in that it marks the point at which Premier League clubs need to meet self-imposed guidelines on disability access at their stadiums.

Premier League clubs have already spent upwards of £600million in transfer fees this summer, only serving to underline their titanic wealth, yet many of them largely consigned the needs and requirements of their disabled supporters to a relative afterthought over the years.

At Stoke, for instance, some wheelchair-bound fans claimed they were unable to witness a penalty for 20 years as they were positioned at the same level as able-bodied supporters, who would stand up for exciting moments during matches. Similar problems were experienced at Crystal Palace, while views at pitchside are often obstructed by camera crews and photographers.

Alongside a lack of suitable facilities which meant that at some grounds away fans would have to sit in the home section, clubs were also guilty of providing a distinct lack of information and services to help disabled supporters with tasks such as purchasing tickets and getting to and from the stadium.

To labour the point: this is a league which accounted for £1.194billion worth of transfer spending last summer. 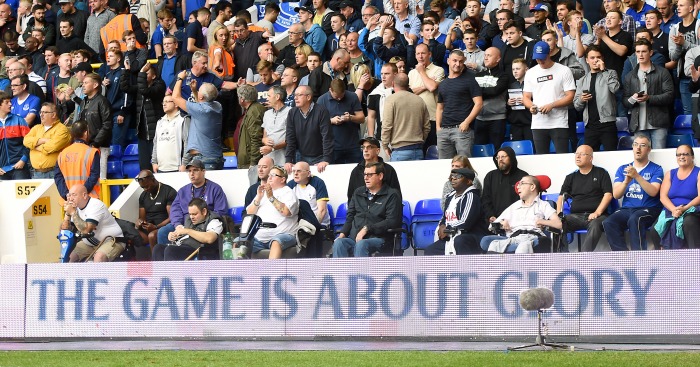 In September 2015, Premier League clubs agreed as a whole to improve access for disabled supporters, setting themselves the deadline of August 2017.

Should clubs fail to meet the requirements, possible sanctions include fines of up to £25,000, while serious breaches can be referred to an independent panel which can impose heavier fines or even a points deduction.

Much work to do

With the deadline looming, recent reports on whether this deadline is set to be met have not been encouraging.

A report from the Equality and Human Rights Commission (EHRC) in April found that 13 out of 20 clubs are failing to provide the required number of wheelchair spaces, while only seven clubs had suitable toilet facilities. Seven clubs were also found to be breaking Premier League rules on providing information to fans.

Chair of the EHRC, David Isaac, pulled no punches in his conclusion: “The information we received from some clubs was of an appalling standard, with data missing and with insufficient detail. What is clear is that very few clubs are doing the minimum to meet the needs of disabled supporters.”

The EHRC have continued their investigation and are set to publish their findings in September. After visiting each and every club, they are finally starting to witness more positive progress. 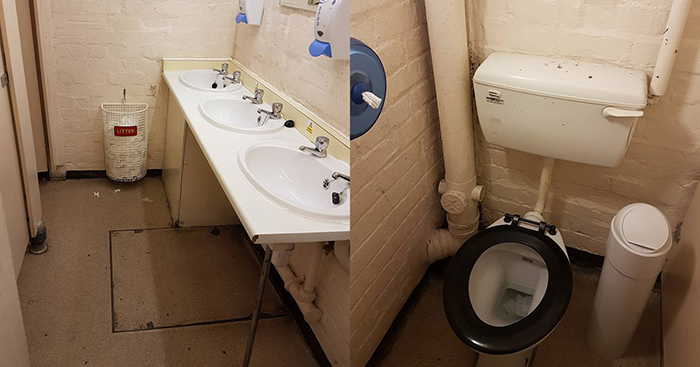 READ: These two women ranked the toilets at every PL ground – the results are sh*tty

“We have seen some clubs undertake significant building work that increases the number of wheelchair spaces,” says Christina Barnes, head of inquiries and investigations.

“But also clubs undertaking access audits so they actually know where they’re up to and they can see what work needs to be done to improve. We’ve also seen clubs making improvements to the services they offer for fans.

“Some clubs have been doing this for years and have got the hang of it and are really confident in what they’re doing, but other clubs this has been a real game changer in terms of them turning their mind to what they need to do to deliver those services for disabled people.

“So some clubs are making quite big changes and commitments and we’re really pleased to see those. What we hope to be able to show in our final report is not just clubs looking to comply with legislation but what clubs are doing differently and what they’re doing to make a difference.”

Barnes is eager to stress, however: “That doesn’t mean that we think that necessarily everybody has got it right, and we’ll be very clear about that.” 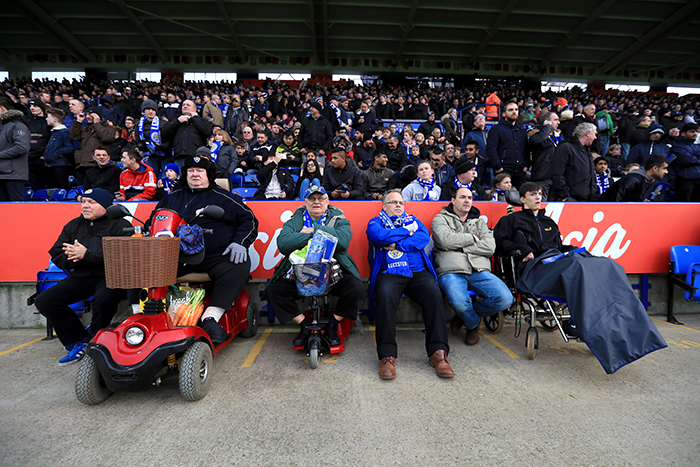 Under the Accessible Stadia Guide, the number of wheelchair spaces a club needs to provide is decided by the following formula:

Seated capacity of stand or stadium: Under 10,000. Number of amenity and easy access spaces: Minimum of 6 or 1 in 100 of seated capacity (whichever is greater).

The headline figure towards the end of last season that 13 clubs were still failing to meet these requirements was striking, but there is additional context around those numbers.

At Watford, who were one of the first clubs in Britain to install a sensory room to allow children with autism to attend matches in comfort, the club has worked closely with the independent disabled supporters group WFC Enables to ensure the needs of fans are met.

Under the guidelines, at the 21,577-capacity Vicarage Road, Watford should provide 153 wheelchair spaces.

Ahead of the upcoming season the club have increased the provision from 61 to 100, but WFC Enables chairman David Butler remains pleased by the work which has taken place, given that the maximum number of wheelchair supporters ever to attend a match is 58 – and there is currently no waiting list.

“To create another 53 wheelchair places to meet this particular guideline would mean removing another 600/700 seats from a regularly sold out stadium and potentially creating an antagonistic attitude towards my members by those able-bodied fans being unnecessarily displaced,” Butler says.

“Enables believes this is an ‘unreasonable adjustment’ and could endanger our members. At the recent Enables Group AGM the meeting unanimously supported this position.

“I know the subject is highly political and I asked the commission to forego political pressures and judge fairly a club that has met every demand Enables have made of it, without ever mentioning budget or cost to the great benefit to the widest possible range of disabled supporters.” 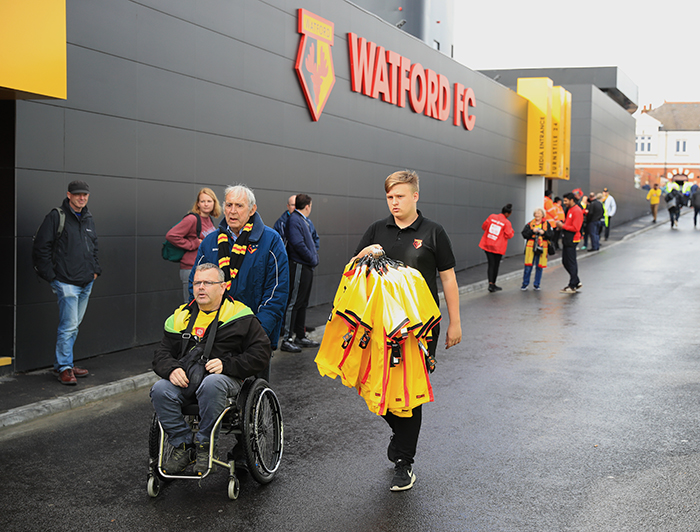 Cases such as Watford are of a particular interest to the EHRC as, rather than judge clubs solely by the Accessible Stadia Guide recommendations, they enforce the Equality Act, which hinders on the premise that the clubs are making “reasonable adjustments”

“We are in our process of understanding what ‘reasonable’ means in terms of football provision, and that’s why our visits to clubs have been so helpful, in order for us to spend time with them and understand the constraints in which they operate,” Barnes says.

“Clubs such as Watford and Crystal Palace have a very constrained ground. It’s very different to a club with a new stadium – lots of room around it, lots of space to do stuff – and it’s also very different to clubs who are at capacity every week.

“So it’s really understanding the difference across that and the difference between those clubs who are building brand new stadiums where you can argue the Accessible Stadia Guide doesn’t even go far enough.”

Should any clubs fail to be found not to have made reasonable adjustments, the EHRC could start legal proceedings, for which they have already received the backing of the Government’s Culture, Media and Sport Committee.

If the recent indications are correct, that might not be necessary, and this summer might be remembered for a lot more than huge transfer fees.