Football & climate change: Why the beautiful game is not doing enough 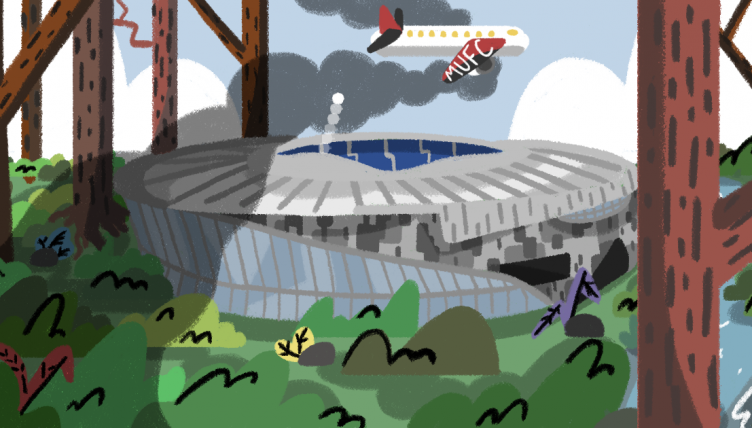 Former Liverpool forward Luis Garcia is, by his own admission, not an expert on climate change. Few of us are.

Yet, as we sit overlooking the sunkissed pitch at an empty Anfield, the passion Garcia has for tackling the biggest challenge of our times is apparent.

“I’ve got four boys and they are very concerned,” Garcia says. “They come to me every day, saying ‘We have to recycle this, we have to use this, we don’t have to throw this thing away’, so you become more concerned about the situation globally.

“They want to have a healthy world to live in and they are very concerned at the moment with global warming, the waste of plastic and the state of our beaches.

“They want to live in a world where they can enjoy and breathe clean air. I think it’s very important we all aware of this and try to do small things to change.”

Garcia is speaking at an event to announce the initiative between Liverpool and SC Johnson, described by the club as a ‘multi-year Goals for Change partnership’.

This will involve creating a programme within Anfield and Liverpool’s club facilities to upcycle more than 500,000 plastic bottles. On matchdays, there will be branded recycling bins located on each concourse encouraging fans to drop their plastic waste into.

In supporting the initiative, Garcia described how small changes in behaviour by Liverpool fans mirror his own.

“With my kids at home, we try to implement our own small changes,” he said. “For example, we put food waste in one bin, the plastic in another one – we’ve got four in total, including bins for paper and glass and a separate bag for the coffee capsules and another one for recycled batteries.

“So they are small things that we can all do on a daily basis to help.”

A commendable stance for sure and Garcia is correct to identify the importance of individual actions and behaviours. But is the football industry as a whole doing enough to tackle the crisis?

That is still open for debate.

The climate crisis is by far the biggest facing our species – and football has already begun to feel its impact.

David Goldblatt, the chair of Football for Future, lays the situation bare: “I spoke with Morten Thorsby, a Norwegian playing for Sampdoria, who started asking his colleagues about climate change a few years back and a lot of them didn’t take him seriously.

“But, more recently, they do their pre-season training in the south of Italy and it’s increasingly become too hot.

“Everybody’s aware that this summer training is suddenly impossible, it’s physiologically dangerous. They may have to switch to indoor training.

“This is a huge issue beyond professional sport. What will it be like for grassroots footballers in equatorial Africa? Playing during the day is going to become impossible.”

Even countries in the colder climes of northern Europe will be impacted. There are 92 teams currently playing in the Football League. By 2050, 23 of them can expect partial or total annual flooding of their stadiums – including Premier League clubs Chelsea, Norwich City, Southampton and West Ham.

Football accounted for 57 of them.

While individual companies are taking steps to reduce their carbon footprint there is an argument that, by keeping polluting sponsors on board, sports detract from their opportunity to play a productive part in the race to zero carbon.

There are other questions that need urgent answers. Can millions of people still drive to matches every week? Can we justify the production of industrially processed meat-based products and fast fan fashion on sale outside grounds? And does the practice of releasing three new kits and heaps of merchandise every season survive the push to a zero-emissions world?

Put simply, football cannot continue the way it is.

It often feels like the footballing authorities are conflicted between their social responsibilities and their expansionist tendencies. As the globe heats up, FIFA are currently proposing a bi-annual World Cup.

Recent competitions have seen fans and players criss-cross huge nation-states like Brazil and Russia and the tournament is set to expand from 32 teams to 48 in 2026.

UEFA have faced similar complaints. On one hand, President Aleksander Ceferin has since ruled out a repeat of the multi-country format used at Euro 2020 and the organisation promised to offset emissions from the tournament with a number of deforestation projects across the continent.

“UEFA have been very bold about how much offsetting they are doing,” Goldblatt observes. “Not just for Euro 2020, but for all subsequent tournaments, their offsetting is in excess of what anybody else has done in football – but there are problems.

“It tends to be used as a ‘get out of jail card’, so people say, ‘We’ll just offset and forget about all the concrete we use and the energy we’re consuming’.

“Thirdly, carbon capture projects are going to have an effect 20 to 30 years down the line when the trees start growing. We need to get emissions halved by 2030.”

At the same time, UEFA have agreed on a dramatic expansion of the Champions League and introduced the Europa Conference League for the 2021-22 season.

By the 2024-25 season, this will result in a 55% increase in the number of group stage matches in major European club competitions.

With UEFA placing emphasis on increasing representation from remote countries like Azerbaijan and Kazakhstan, aviation emissions will inevitably increase and the industry already accounts for about 5% of global CO2 emissions.

Together with @UEFA, we present a team of football greats turning on their skills against climate change.

Team 🇪🇺 trick is #EUGreenDeal and we expect the 🌍 to join us with their tricks at #COP26.

It takes all our tricks to protect the climate. #EveryTrickCounts pic.twitter.com/srw5xaGTP4

Michele Uva is UEFA’s director of football social responsibility. When asked whether their rhetoric, while pursuing the expansion of tournaments, is a case of ‘greenwashing‘, he told BBC Sport: “The fans are travelling and producing carbon emissions but on the other hand fans are producing benefit for the economy and benefit socially.

UEFA say they remain committed to more sustainable practices and see the next European Championship, which will be hosted in Germany in 2024, as a major opportunity to implement them.

The worry is that these gestures simply aren’t enough when they run parallel to their more expansionist agenda.

England’s elite clubs are beginning to adopt more planet-friendly practices. Tottenham, leaders in the 2019 sustainability rankings published by BBC Sport, have installed a ‘green roof’ of flowering sedum plants at their training centre to enable the capture and re-harvesting of rainwater across the site.

Local rivals Arsenal switched to renewable electricity in 2017 and have claimed to be the first club in Europe to install a battery storage system – which can power the Emirates Stadium for an entire 90-minute match.

But the two main climate-related stories from the 2021-22 season clearly demonstrate the conflict of interests surrounding our major football clubs.

In September, Sky Sports and Tottenham announced – to much fanfare – that the fixture against Chelsea would be the world’s first net-zero carbon football match.

🚲 Arriving in style @GeoffShreeves has made it to the Tottenham Hotspur stadium after cycling 18 miles from his home for the world’s first net-zero carbon football match pic.twitter.com/FCt7LAyMBb

Both sets of players arrived at the Tottenham Hotspur Stadium on coaches powered by biofuel and drank water from more sustainable cartons rather than plastic bottles.

Meanwhile, fans were urged to take positive steps to reduce their own carbon footprint, such as using public transport to travel to the match and choosing the plant-based food options on offer at stadium kiosks.

But Sky and Tottenham have refused requests to share the data from #GameZero after the game, limiting the conclusions that can be drawn from the event.

“As a way of putting the message out there and exploring what we need to go to get to net zero, it was a really good idea,” says Goldblatt. “But the execution wasn’t quite there.

“I’m sure it was done in good faith but it was a real missed opportunity. The messaging needed to be much clearer.

“I think Tottenham were running before they could walk. I’d like them to do it again but do it properly – collect the data, lay it all out and publish it.”

And, just a single month after #GameZero, Manchester United came in for heavy criticism after flying to an away fixture at Leicester.

“It’s totally unjustifiable,” Goldblatt says. “They need to be laughed at for their stupidity. There’s a climate crisis going on, the very least you can do is get on a coach to Leicester. It’s not like it wouldn’t be a luxury coach anyway.”

“There’s a much bigger debate about air travel and international sport,” Goldblatt added. “But this was just ridiculous.”

And decisions such as these serve to undermine all the initiatives launched by Premier League clubs.

Perhaps the answer lies with the Football League’s new initiative, EFL Green Clubs, that every club in the second, third and fourth-tiers have signed up for.

It claims it will offer support to all 72 member clubs to reduce their environmental impact via a benchmarking and development scheme delivered by the environmental specialists at GreenCode.

Business practises across eight areas including energy, waste and procurement will be assessed independently and scored on their environmental credentials.

And one club that’s already a leader in this field is Forest Green Rovers, whose commitment to sustainable practices is well-documented.

The Gloucestershire-based side have implemented practices such as an organically-grown pitch, vegan-only cuisine for players, staff and supporters and a playing kit made from used coffee grounds and recycled plastic.

They’ve also been granted planning consent to build a new stadium made out of wood. It’s no wonder that Forest Green have been recognised by the United Nations and FIFA as the most environmentally sustainable professional sports club in the world.

While the practices at Forest Green may seem extreme to some observers, owner Dale Vince has argued that the UN’s Sports for Climate Action programme is “pretty much based on what Forest Green have done.”

The key, Vince says, is “engaging fans through their favourite sport and getting them to be fans of the environment.”

Football fans aren’t necessarily the most receptive audience to change, but that only adds to the appeal of undertaking it – if that demographic can be convinced, then anybody can.

Having risen from non-league, Forest Green have shown that an unwavering commitment to sustainable practises across every aspect of the club’s operations can be successful and replicable.

And the hope is that their methods can be implemented across the Football League in order to achieve net-zero by 2030.

Without the global fanbases of the very elite teams, clubs below the Premier League can become standard-bearers for sustainability and social responsibility.

But, if the investigation into football and sustainability has revealed anything, it’s that we need the bigger entities to follow suit for any projects to be successful.

“The issue is less whether we hit net-zero,” explains Goldblatt. “Because we are some way off that. But we need to have the conversation with fans and the wider football community about how we are going to get there.”

To this extent, football is increasingly having that conversation. There has been an increase in climate-friendly initiatives and there is recognition that football alone cannot solve a society-wide problem.

Organisations such as FIFA, UEFA and the Premier League have all made noises about adopting more sustainable practices and there have been some laudable initiatives launched to tackle the climate problem.

But it’s clear that further steps are urgently required to create long-term change.

If the football industry’s planet-friendly rhetoric is to ring true, it must adopt a more radical approach to sustainability to back it up.

What Football Means To Us: A British Asian Perspective