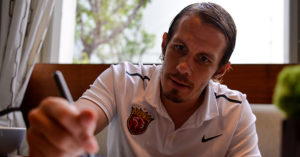 This photo taken on August 7, 2017 shows Shanghai SIPG football club director Mads Davidsen making notes during an interview in Shanghai.
Davidsen does not necessarily think China will win the World Cup but he has no doubt that the world’s most populous country can finally become a competitive force and reach the World Cup knockout stages in about 15 years. / AFP PHOTO / CHANDAN KHANNA / TO GO WITH INTERVIEW STORY BY Peter STEBBINGS (Photo credit should read CHANDAN KHANNA/AFP/Getty Images)