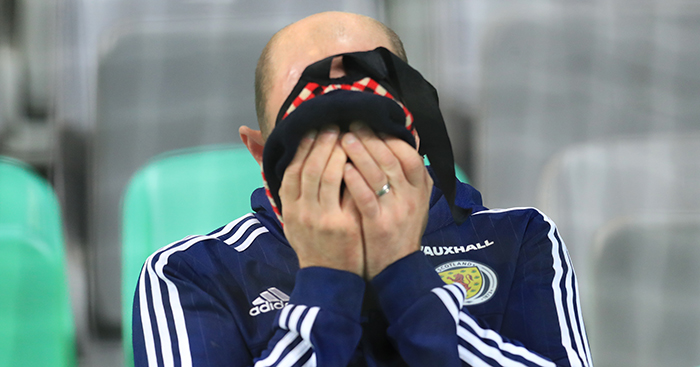 Every season you hear a story about the worst team in the UK. With 12 defeats from 12 games, three goals scored and 53 conceded in the Scottish Lowland League, Hawick Royal Albert are making their case to be 2017’s story.

Those defeats have included 10-0 and 9-0 home reverses against Selkirk and BSC Glasgow, and there are obvious concerns recently-appointed manager Craig Tully has his work cut out to stem the tide of defeats and almost certain relegation.

Hawick finished third from bottom in their first ever Lowland League campaign last season having played in the East of Scotland League for much of their recent history, winning the title three times since the early 1960s.

Unfortunately, at a time when they would have benefited from a period of stability, they have experienced exactly the opposite.

Dean Shanks quit as manager in February 2017 after becoming the father of twins, and then his successor Kevin Milne departed after the season finale, claiming he could not attract good quality players to the club.

Hawick then took the bold decision to appoint 23-year-old Kenny Aitchison over the summer, but he too quit after just four games, of which three were heavy defeats.

Honorary President Irene Hutchinson, who has been associated with HRA for 46 years, admits the appointment was a mistake: “Aitchison was a graduate from university and impressed us with his coaching certificates and apparent knowledge of the game, but his actions did not match his words.”

Aitchison’s reason for resigning was that he would be assisting his father William at Airdrie, but it was apparently news to Airdrie.

He appeared in the dugout alongside his father for their next match against the wishes of the board, and William was promptly sacked despite the team winning 3-1.

Hawick, meanwhile, suffered three more defeats in the league before announcing Tully as their new manager in early September.

We are delighted to welcome Craig Tully as our new manager. Craig used to play for Dundee and Ross County before managing East Stirlingshire pic.twitter.com/p54ZO81IG9

If it were not clear already, a 9-0 defeat in his first match in charge let Tully know just how big a job he had taken on. “He had strong words for the calibre of playing staff inherited,” according to Hutchinson.

Just one player remained from the 2016-17 season when Hawick began the current campaign, and it is fair to say Tully was not impressed with the standard of recruitment by his predecessor.

However, The Albert were beaten just 1-0 by Cumbernauld Colts in their next game as the ex-East Stirlingshire boss and former Dundee player began to exert his influence.

It is hoped he has learned from his experiences at East Stirlingshire, who were relegated from the SFL under his stewardship in 2016, ending a 61-year stay in the Scottish national league set-up.

Hawick have lost all five of their league games under Tully so far but did beat Tweedmouth Rangers in the Football Nation Qualifying Cup and were victorious again in a friendly last weekend.

Tully has been able to make a few new signings, but by and large must work with the players he inherited.

“I wish he had been appointed at the beginning of the season instead of Aitchison,” says Hutchinson.

Though their current situation is bleak, a conversation with long-serving local sports journalist John Slorence in a Hawick café revealed The Albert have enjoyed some success following their formation in 1947.

Several other cups were also won during the previous century, including the King Cup and the East of Scotland Cup, by a team which was previously known as Hawick Railway FC. Committee member Willie Bunton decided the name was too boring and added the suffix Royal Albert, which was a boat owned by his former boss in the Lanarkshire town of Larkhall.

Hawick moved into their current home of Albert Park in 1963, but the nearby River Teviot provided another tale of woe during the winter of 2015-16, when the stadium suffered the effects of serious storms and was flooded on more than one occasion.

Hutchinson says: “My father lived opposite (the stadium) and used to cross the river in waders to watch a match, but that flooding proved to be costly.”

The club also appears to suffer from rugby union being regarded as the more prominent sport in the Scottish borders area.

Travelling in a car with Hutchinson from the town centre along Mansfield Road, she emphasised how the first stadium en route is that of Hawick RFC, followed by the home of their reserve team.

Only then is Albert Park seen, as if stressing the point that the club is overshadowed by rugby, which attracts greater attendances than the 50+ supporters who normally watch Hawick Royal Albert home matches.

Despite all of this, the hardy band of supporters that do turn up to watch are keeping their spirits up. As Slorence says: “We did win a game recently, so things could be looking up.”