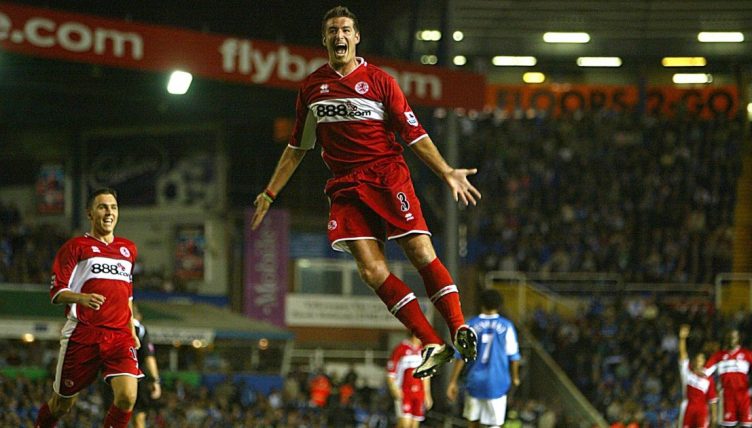 For a club so long deprived of material success, the 2004 League Cup final changed everything for Middlesbrough. After more than a century of trying, a 2-1 win over Bolton Wanderers earned Boro the first major trophy in their history.

Middlesbrough made a ruthless start at the Millennium Stadium, scoring twice inside the opening seven minutes through Joseph-Desire Job and Bolo Zenden. The usually reliable Mark Schwarzer let Bolton back into the game, allowing Kevin Davies’ tame shot to squirm past him at the near post, but some dogged defending preserved Boro’s slender lead throughout the second half.

Winning that match was a defining moment for Franck Queudrue, who had joined Middlesbrough from Lens three years earlier. Looking back, he acknowledges that lifting the trophy at the end of a long, nerve-fraying afternoon was the highlight of his career.

“I still remember the feeling when Mike Riley blew the whistle. It was fantastic. It was my first trophy as a player and to share that with the fans was incredible because it was their first trophy too, in 128 years. I think we enjoyed it a little bit too much because the game after we lost 3-1 at Birmingham,” laughs Queudrue.

The left-back fell in love with the passion and intensity of English football. A technical player with a wholehearted attitude, Queudrue immediately felt at home in the Premier League, going on to represent Fulham and Birmingham City before returning to France in 2010.

Queudrue made his breakthrough at Lens during the 1999-00 season, when they finished fifth in Ligue 1 and reached the semi-finals of the UEFA Cup, losing 3-1 to Arsenal on aggregate. Trying to contain Dennis Bergkamp, Thierry Henry and Freddie Ljungberg was a challenge that he would become familiar with over the coming years.

Playing for Lens also gave Queudrue an early insight into the enigmatic El Hadji Diouf. The Senegalese attacker was little known at the time but combined great skill with a flamboyant personality.

“He came on trial to the academy when he was younger,” Queudrue says. “They didn’t take him, but I always knew that he was going to go through and play at the highest level. We always stayed in contact. He’s someone I really appreciate.

“He might be extravagant, but he’s a good person, that’s the most important thing. He was a fantastic player for Lens as well. He scored some great goals.”

By October 2001, Queudrue had lost his place in the starting line-up and seized the opportunity to join Middlesbrough, who needed a left-back and a confidence boost, having endured a difficult start to the season under rookie manager Steve McClaren. He originally joined on loan, but a short stay turned into a long one.

“We had a great team spirit all the time. Every year. The players made me feel welcome when I first arrived in Middlesbrough. Everybody. I remember the guys taught me a bit of swearing and slang, especially Dean Windass,” laughs Queudrue.

“But that helped me a lot to understand what people were saying on the pitch. They were talking quite fast in the dressing room, so I had to pick up the pace to learn English quickly. In Rome, you do as the Romans do.”

Queudrue made his debut in a 0-0 draw at Charlton and then scored the opening goal of a 2-0 win over Sunderland just a couple of minutes into his first match at the Riverside Stadium, beating Thomas Sorenson to an in-swinging corner. In difficult circumstances, he made a perfect start.

“My wife was pregnant with our first daughter, so it was a bit tricky, but the fans adopted me very quickly. I felt very good at Middlesbrough. It’s a real family club with a fantastic chairman, Steve Gibson. The staff were fantastic as well, dragging us forward to achieve a bit more each year.

“It was a different type of football. It was a very high tempo all the time – attack, defence, attack, defence. It never stops. As soon as you get the ball you go forward as fast as you can and try to be dangerous. Obviously, that creates a lot of opportunities for both sides.

“The hardest part for me was to catch up with the pace of the Premier League because I wasn’t playing that much in France.”

Franck Queudrue with a beauty against Birmingham in 2002 🇦🇹 pic.twitter.com/OtuPfZsNs5

McClaren was impressed by the ease with which Queudrue adapted to the Premier League, making his loan move permanent for £2.5million at the end of the season. A talented Middlesbrough team only improved from there, with successive mid-table finishes capped off by the historic League Cup win.

The technical quality of Bolo Zenden, Juninho and Gaizka Mendieta was added to the resilience of Ugo Ehiogu, Gareth Southgate and George Boateng, striking a good balance.

Playing alongside the level-headed Southgate was reassuring for the attack-minded and occasionally impetuous Queudrue, who picked up six red cards during his time in England.

“I played with Gareth for five years and built up a relationship with him. We complemented each other. We were always talking to help each other. He was always calm and a good analyst of the game.

“He was leading by example. On the pitch he was Mr Security for me. I could make a mistake and know that Gareth was behind me to deal with it.” 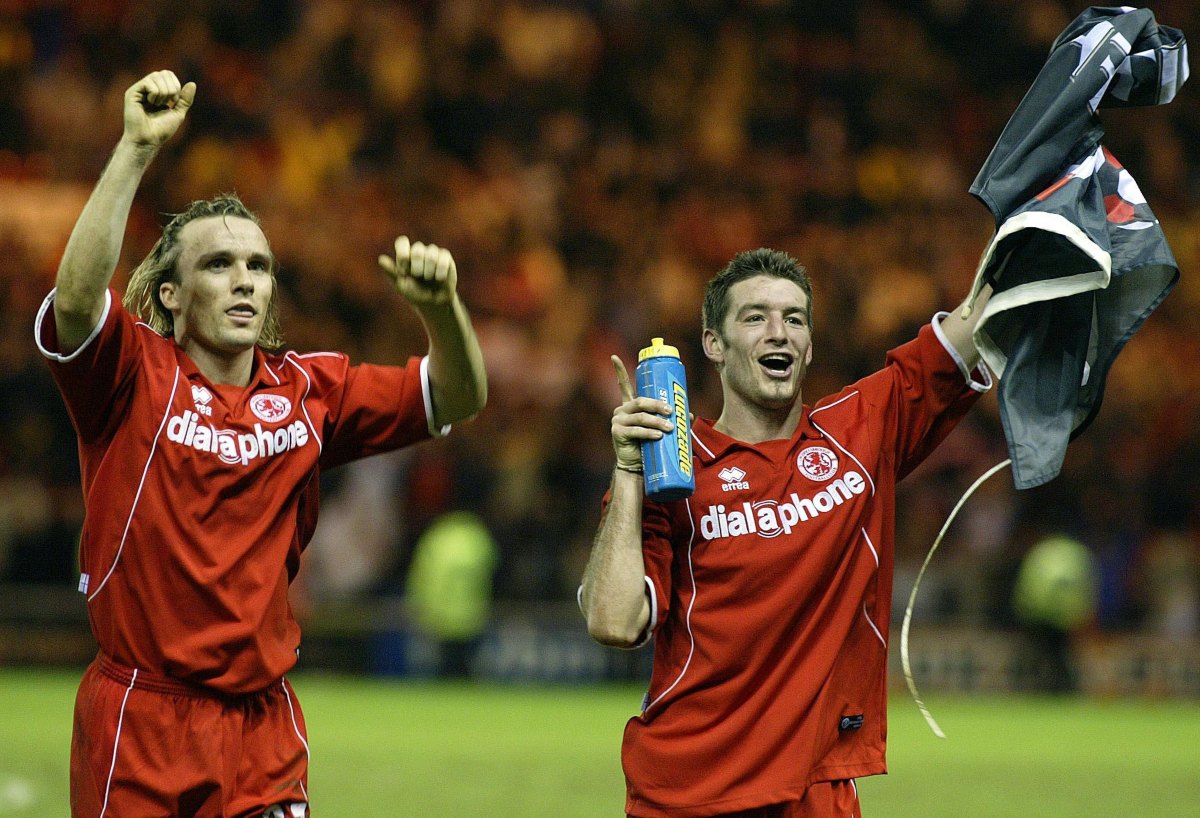 Although he wasn’t averse to a full-blooded tackle, Queudrue showed composure too, none more so than when he calmly tucked away the winning penalty against Tottenham Hotspur in the quarter-final of Middlesbrough’s successful League Cup run. He playfully kept the ball in the air with his head as he approached the spot, before sending Kasey Keller the wrong way.

But nothing could match the drama of Boro’s UEFA Cup adventure. After overcoming three-goal deficits against Basel and Steaua Bucharest, the players felt confident of winning the final in Eindhoven. Although a formidable Sevilla side featuring the likes of Dani Alves, Jesus Navas and Luis Fabiano proved too strong in the end, there was still pride in defeat.

“If you look at the result, it was a little bit harsh to be honest,” Queudrue says. “After the 70th minute I went off injured. We were 1-0 down at the time and the gaffer decided to go with Yakubu instead of me.

“He put Stewart Downing as a left-back. He was bombing forward, and we got caught a couple of times.

“Obviously at that level it’s unforgiving, so we conceded two, three and then four. But it doesn’t matter. We played the final and we’re proud of that.”

This would be the last Boro match for both Queudrue and McClaren, who left to take over from Sven-Goran Eriksson as England manager. They had developed a strong bond throughout their five years together on Teesside.

“I got on with him very well. I rate him very highly as a manager. He was a smart manager, and his staff were fantastic. For me, England didn’t give him enough time to build a team.

“To see what he did with Middlesbrough in five years, to win a trophy and play in the final of the UEFA Cup, was great.”

Much like McClaren, Queudrue had international ambitions of his own. Having played regularly in the Premier League and acquitted himself well in Europe, he thought there was an outside chance of a call-up to the France squad in 2006 but was disappointed to see the less experienced Pascal Chimbonda chosen ahead of him as defensive back-up.

“I said to the press, ‘Maybe if I want to go to the World Cup, I might need to change my nationality to Irish. I’ve got Irish ancestors.’ A week after the interview I got a call from Brian Kerr, who was the Ireland manager at the time.

“He called me and said, ‘Are you serious?’ I have Irish ancestors from my grandad, but it was actually a generation too far.”

That summer Queudrue joined Fulham in search of a fresh challenge but spent only a year at the club. Brought in by Chris Coleman, he was quickly moved on after the more direct Lawrie Sanchez took over at Craven Cottage.

Queudrue arrived at Birmingham City and endured a painful first season, ending in relegation. Chairman David Sullivan publicly criticised several of the club’s recent signings, including the Frenchman, for failing to make an impact.

“I didn’t take it too personally to be honest because he had a big argument with Steve Bruce, who left the club to go to Wigan in November.

“We got relegated in the same season and David Sullivan tried to get back at Steve Bruce by saying that his signings were rubbish. He mentioned me and a few other names.

“It was the day of the end of season gala and talkSPORT called me. They said, ‘Are you going to go this evening after what David Sullivan said?’

“I said, ‘Yes, of course. It’s a matter of opinion. He was talking from his heart and he wants the best for Birmingham. His words were louder than his thoughts but that doesn’t matter to me. I will attend tonight.’ But David Sullivan never came that night.”

It seemed like Queudrue’s Blues career was over as Alex McLeish informed him that he was available to leave on a free transfer. In the end, he stayed and proved his worth, fighting his way back into the team and scoring three important goals on the way to promotion. His redemption was complete. 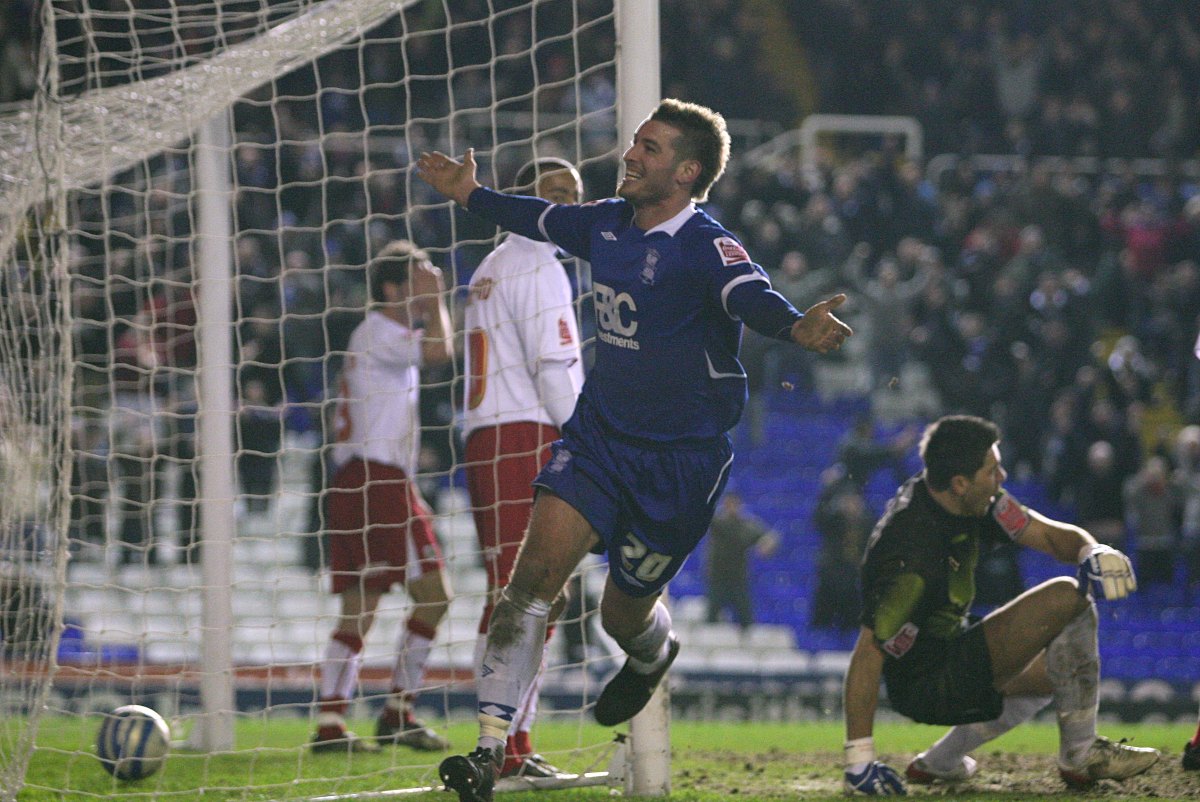 “When I play, I give my best all the time to try to achieve something. To ‘wet the shirt’, as they say in France. To work my socks off every single game and every single training session.

“I was that kind of player. I got picked by the journalists and the supporters as Player of the Season, which was great.”

After a brief loan spell at Colchester United, Queudrue left Birmingham to return to his first club Lens in 2010. Three years later, he retired at the end of a final season with Red Star. He is a qualified coach and runs an events company with his former team-mate Daniel Moreira.

Although not currently involved in football, Queudrue is still only 42 and hasn’t given up hope of coaching professionally, ideally in England, where he spent the majority of his playing career and started a family.

“I’m doing something different at the moment, but obviously I keep an eye on football and if one of my old team-mates is taking a team and wants a defensive coach or an assistant, something like that, I’d be there. I would do that because football is part of my DNA.”