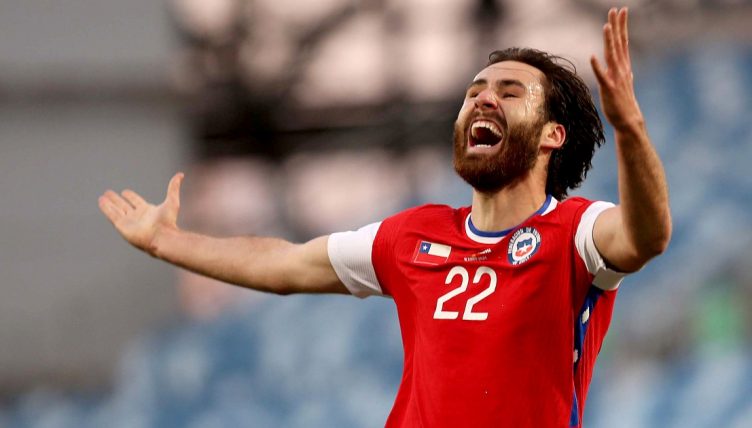 From a European perspective, the Copa America has long been a tournament full of intrigue and romance.

The games are on late at night, usually played out in front of boisterous crowds, and feature some of the world’s finest lining up alongside South American club players that the audience rarely get to lay eyes upon.

Yet among the usual suspects and South American young guns in this year’s Copa, there is a name that stands out – not for its exoticism, but for its lack of. When Chile face Neymar’s Brazil on Friday night in Rio de Janeiro, Martin Lasarte’s La Roja line-up will likely include Blackburn Rovers forward Ben Brereton.

Born in Stoke-on-Trent, 22-year-old Brereton qualifies to play for Chile through his mother, Andrea Diaz. He speaks barely a word of Spanish, yet he is taking full advantage of his first call up, scoring on his debut to thrust himself straight into Lasarte’s team.

Brereton spent most of his youth in the Manchester United set up before being released at 14 and finding his way first to boyhood club Stoke then Nottingham Forest, where he earned a place in the England Under-19 squad for the 2017 European Championship.

In a side that included Reece James, Ryan Sessegnon and player of the tournament Mason Mount, Brereton helped England lift the trophy, finishing as joint top scorer with three goals.

But at the beginning of this year, Brereton decided that he would take the Chilean passport to which he is entitled and declare for the nation of his mother’s birth.

Brereton’s great grandfather owned a pottery business in the Chilean town of Concepcion, hence the connection with Stoke, and sent his son, Brereton’s grandfather, to study in the UK. Brereton’s mother followed in her father’s footsteps, moving to England to further her education aged 15. But unlike her father, Andrea never returned, instead settling in Staffordshire with Brereton’s father.

Brereton has only been to Chile once, when he was still a baby, but La Roja boss Lasarte had been notified of Brereton’s eligibility and form for Blackburn after a social media campaign that was started by a Chile fan who spotted Brereton – and his Chilean roots – on Football Manager. After his passport came through, Brereton was called up at the first opportunity – for two vital World Cup qualifiers and the Copa America, no less.

“This is something incredible. I am so proud,” said his mother in a Chilean newspaper interview. “We’ve cried, cried and cried, it’s an incredible opportunity.”

Given that he had no prior experience of South American football and speaks almost no Spanish – so little that he opted for Wonderwall as his initiation song – the decision to take Brereton was seen more as an opportunity to have a look at what he could bring.

Ben Brereton Díaz has just had his initiation with the Chile squad… #Wonderwall #Ben10 #BigBen pic.twitter.com/IivBTGnzaS

In press conferences prior to the tournament, Lasarte highlighted Brereton’s size and power. Likewise, Chilean pundits commented favourably upon the league he plays in, noting that it will be useful to have a player used to the rough and tumble of the English second tier in La Roja’s ranks.

Additionally, Brereton is an injection of youthful energy into an ageing squad. Chile have tasted unprecedented success over the past decade, a golden generation playing scintillating football at World Cups and winning back-to-back Copa Americas under Marcelo Bielsa, Jorge Sampaoli and Juan Antonio Pizzi.

But in 2021, the side features many of the same faces as it did in 2011. Eduardo Vargas and Alexis Sanchez still lead the line, Arturo Vidal still snaps around in midfield, Claudio Bravo remains first-choice ‘keeper and even Jean Beausejour and Gary Medel are there, stuck in their defensive roles like ancient, irremovable bits of chewing gum glued to a city-centre pavement.

Lasarte’s job, then was to give La Roja a transfusion of fresh blood. And before the start of the tournament, the youngster for whom Chileans had highest hopes was probably Carlos Palacios, a nippy, 20-year-old attacking midfielder currently playing for Internacional in Brazil. Brereton was more likely a long-term development project.

“I have been learning [Spanish] keywords,” he told the Lancashire Telegraph pre-tournament, like a kid after his first week at secondary school. “They also provided me with the basic football words… Everyone has received me very well.”

In the two World Cup qualifiers, 1-1 draws with Argentina and Bolivia, Brereton didn’t get a look in. But come the tournament opener, another 1-1 draw with Messi’s Argentina, Lasarte felt he was ready. Alexis Sanchez was out injured so with 30 minutes to go, the young Blackburn man emerged from the bench with the No.22 shirt bearing the name Brereton Diaz, a nod to his mixed roots.

“They asked me to make runs in behind the defence, to hold the ball up and make a nuisance of myself,” said Brereton after the game. Though that description of his role might sound more Lancashire Senior Cup than Copa America, he was highly effective and even nutmegged an Argentine defender.

In the next game he started on the left of Chile’s 4-3-3, but high and narrow, alongside Vargas. Immediately, the decision to include him paid off, Brereton running through after 11 minutes onto a Vargas pass and firing into the bottom corner for the only goal of the game.

What a strike! Ben Brereton makes it 1-0 to @LaRoja against Bolivia with a great finish ⚽

His coach was delighted, saying after the game: “For Ben it was an important occasion, but also a difficult one, to play as a starter in the national team where they do not speak the language he speaks… He had his chance and he took it.”

Vargas echoed the sentiment: “We don’t know his language, he doesn’t know how to speak Spanish either, but we understand each other very well on the pitch.”

They proved that again in the next game against Uruguay, this time playing as a strike duo in a 5-3-2. In the first half, Brereton made an intelligent channel run, pulling Diego Godin out of position to create Vargas’ opening goal in another 1-1 draw that secured their place in the quarter-finals.

The Chilean interest in Brereton has, as one might imagine, been intense. TV channel TNT sent a crew to his family home in Staffordshire to interview his mother, comments have filled Brereton’s social media, ex-Chile international turned TV presenter Maricio Pinilla tweeted jokingly that he will call his next son Ben in Brereton’s honour. Brazilian outlet Globo even included him in their team of the group stage, in a front three with Messi and Neymar.

Now, though, the real test of his and Chile’s mettle. On Friday, La Roja take on hosts, favourites and holders Brazil in Rio. Neymar is back and in brilliant form. They have Alisson, Thiago Silva and Marquinhos and have only conceded four in their last 10. There are few harder tasks in South American football.

If included, Brereton will really have to battle to get any change out of that defence. But he may present the Brazilian defenders with a task that is unfamiliar.

Whatever happens, this is the beginning of the ballad of Brereton with Chile. He has done more than enough to get called back into the squad so long as he maintains his club form – be that at Blackburn, or even for Leeds or Real Sociedad, should transfer rumours prove accurate.

Chile have a long road to World Cup qualification still ahead and having not made it to Russia 2018, they are desperate to prove themselves this time. They will be hoping that their Stoke-born front man can lead them there.