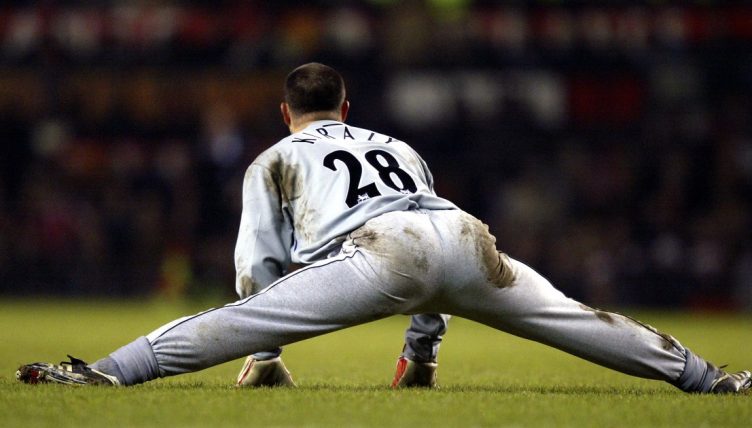 On the pitch, footballers are rarely noted for their fashion choices. There are a few famous exceptions, but those are normally borne of necessity, such as Edgar Davids’ glasses or Petr Cech’s protective helmet. For Gabor Kiraly, grey jogging bottoms became his trademark.

The Hungarian goalkeeper started wearing them at his first club Haladas in 1996 and rarely played without them during the rest of a lengthy career that included more than 800 competitive appearances. It’s what many supporters instinctively remember him for.

“At that time in Hungary the pitches were very bad so in training and games I always wore bottoms just to protect my legs,” Kiraly says.

“I had two pairs of trousers – one black and one grey. The black ones hadn’t been washed by the club and we had a game the next day. I said I’d wear the grey ones just for one game and we won.

“It was a very important win so I kept playing in the grey bottoms and we didn’t lose for nine games. We went from a bad position to a good one. I thought they brought me luck so that’s why I always wore the grey bottoms. They made me feel more comfortable.

“I wasn’t interested in how I looked. For me, it was only important how I felt.”

The jogging bottoms went with Kiraly to Hertha Berlin a year later. The club had just been promoted to the Bundesliga and he made his debut in their first win of the season over FC Koln, having displaced first-choice goalkeeper Christian Fiedler. 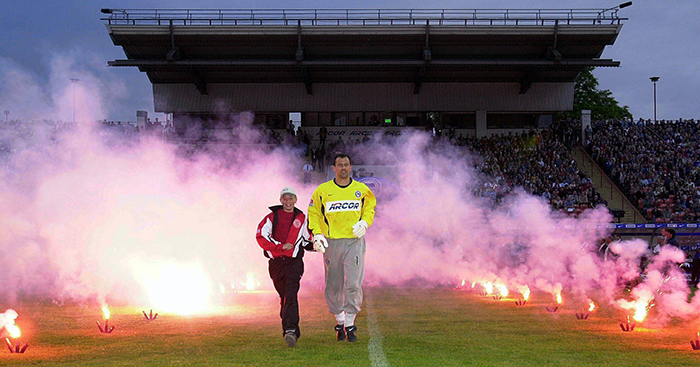 Kiraly went on to play more than 200 games for Hertha, helping them to finish third and qualify for the Champions League in 1999. They beat AC Milan and Chelsea at home to reach the second group stage but couldn’t contend with Porto, Barcelona and Sparta Prague.

“It was a great opportunity and a great feeling to play in the Champions League, against a lot of stars and a lot of legends,” Kiraly says. “I was very young at the time. We had very difficult groups and played against a lot of good teams. It was very important for everyone to just take the experience from these games.

“I enjoyed every second because I knew that maybe that moment wasn’t going to come around again. That’s why I enjoy life and I enjoy every football game. I enjoyed the whole feeling of the Champions League.”

After seven years in Germany, it was time for a change. Kiraly wanted to test himself in a different environment and he was instinctively drawn to the profile and excitement of the Premier League. His contract had expired and he accepted an offer from Crystal Palace, who had just won promotion under Iain Dowie.

“Everybody was speaking about England and the Premier League and I wanted to live there and feel that atmosphere. The club was like family and the fans were very friendly. The support was brilliant. My team-mates were very good and I learned a lot.

“I learned about the weather, about the teams, about everything. Before I never knew who played in League One and League Two. I learned where a lot of cities were on the map. That was very interesting.”

Kiraly began the season as back-up to Julian Speroni so his first taste of English football came in a League Cup tie against lowly Hartlepool United. Four days later he made his Premier League debut away to Aston Villa. Palace claimed a 1-1 draw and Kiraly refused to surrender his spot from then on.

“I wanted to learn the style of the Premier League,” he says. “It was quicker and stronger. At that time there weren’t a lot of technically special players, but there was more fight and honesty. Everyone wanted to win and it was very hard. I liked it.

“If I came for crosses in Germany, maybe one player would jump and look for contact, but in England two players would jump against you. I like to work and I like the fight. That’s what the Premier League and Championship were like at that time.”

Palace’s fight for survival went down to the final day. A 2-2 draw with Charlton wasn’t enough to avoid relegation on an emotional afternoon at The Valley. Dowie’s side came from behind to lead and were set to stay up until Jonathan Fortune equalised late on with a thumping header. West Brom completed the great escape instead.

“It was a difficult game and unfortunately we went down, but the reaction from the fans and the club was very positive,” Kiraly says. “We had to keep going and bounce back from the Championship.

“Crystal Palace has a big tradition and I was very lucky to be part of it. You always want to play at the top, but I came to Crystal Palace because I wanted to play for them.”

Kiraly stayed at Selhurst Park along with the club’s leading scorer Andy Johnson, and both were central to the promotion push that followed. The goalkeeper made 48 appearances during a draining season that ultimately ended in disappointment.

“It was a new challenge and I learned a lot. At the end of the season we were sixth in the table and we went into the play-offs against Watford. But we lost 3-0 at home and drew 0-0 away.”

During the last of his three years at Palace, Kiraly went on loan to West Ham United and Aston Villa, who were both in the Premier League. They were fleeting spells to cover for injury crises and he left permanently at the end of his contract, signing for Burnley.

The Clarets’ expected promotion challenge didn’t materialise, with Steve Cotterill being replaced by Owen Coyle, and Kiraly soon found himself out of favour. For someone who had played consistently since making his debut at 17, the long break reinvigorated him ahead of a return to Germany. 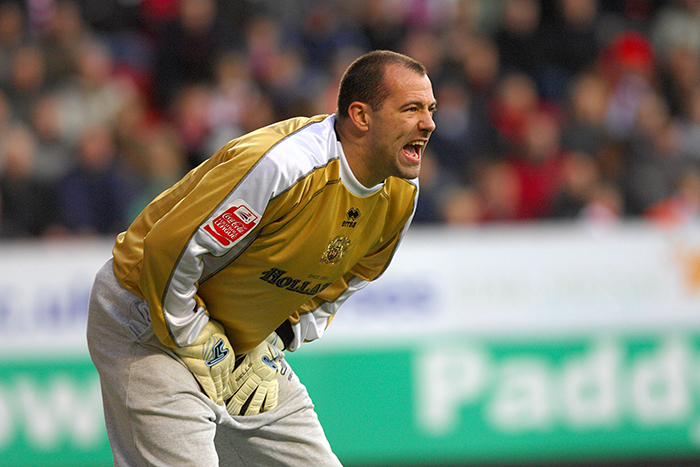 “I was 32 and my head was feeling a little bit empty,” he says. “This one year of rest, with nothing to do but training, and no pressure from games, was a very good opportunity to reload it. When I moved to Germany again I had new energy.

“Sometimes you need to refresh yourself for a new challenge and that time in Burnley was very important for me. I gave everything in training for the staff and for my team-mates, and I never had a problem with anybody.”

Although Kiraly didn’t reach the Bundesliga with 1860 Munich, they were regulars in the top half of the second tier. His stay there unfortunately ended on a sour note, with the club disciplining him following a fiery disagreement with a team-mate during a 3-0 defeat to RB Leipzig, but he still insists it wasn’t a big issue.

Via a season in the Championship with Fulham, where he made just a handful of appearances, Kiraly went back to his first club Haladas. He had left as the promising young star and returned as a wily veteran, having experienced so much in the interim.

“It was a great feeling to come home after 18 years abroad. Sixteen years ago I built my sports centre and my own club (Kiraly SZE). I organised everything from Germany and England, but for the last four years I’ve been in the same city.

“I’m happy to be here in Hungary. When I wake up, I don’t need to travel or fly. I just stayed home and played for my hometown club.”

Kiraly finally retired in May 2019, having won 108 caps for his country and represented them at Euro 2016, where they topped their group to reach the second round. In the process he broke Lothar Matthaus’ record as the oldest player to appear at the European Championships.

“Euro 2016 was a great feeling for the whole of Hungary, and the whole Hungarian people,” says Kiraly. “The national shirt is special because you have responsibility for the whole country. I was really proud.

“Maybe my DNA is different. I always wanted to keep playing and fighting. If I go training, I want to do it 100 percent. I don’t want to just do it for 20 minutes. I always want to give my best and I did that until I was 43.

“Of course, in the last few years I’ve had some pain in my knee and my ankle. This is normal. If I look in the mirror I can say I’m really happy with my career. Lot of clubs have given me the opportunity to play for them and that’s the greatest feeling.

“That’s why I built the sports centre, the goalkeeper school and the football club. It has 250 people and 22 coaches. If I got something from football, I want to give something back in the future for the kids and the coaches.”

The 43-year-old still has links to his former clubs too. He has done some coaching with Crystal Palace, and Kiraly SZE enjoy a partnership with Hertha Berlin.

As with his motivational speaking, Kiraly is determined to pass on the lessons he has learned from a long and eventful career.

This article was originally published in December 2019.