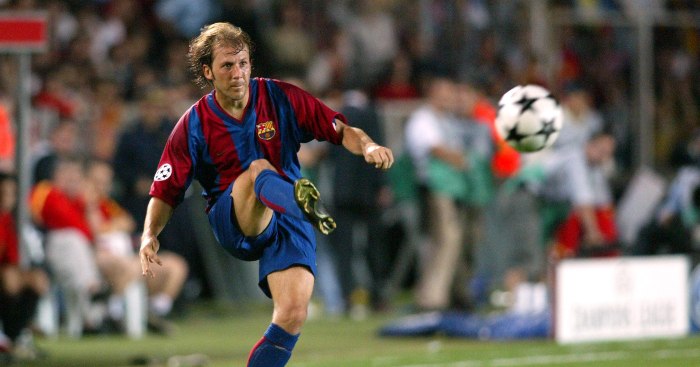 He captained Valencia in back-to-back Champions League finals at the start of this century, yet Gaizka Mendieta was destined never to get his hands on the biggest trophy in club football.

Mendieta was a key member of that cult Valencia side beaten by Real Madrid and Bayern Munich in the 2000 and 2001 deciders respectively and later played in the UEFA Cup final with Middlesbrough, when he again ended on the losing side.

As the finals of this year’s Champions League and Europa League are being played out over the next few days, we sat down for an exclusive zoom chat with the gifted midfielder and current BT Sport analyst.

How do you reflect on your days at Middlesbrough?

I can just about remember it, but it feels like a long time ago now! I feel like the Premier League has changed a lot since then. First of all, a lot of foreign managers came to England and changed the philosophy of how the game is played on and off the pitch.

Why do you think things have things changed in England?

Tactically, teams are so much more aware now than they were 20 years ago in England. Also, the game is more athletic than it was when I was playing. Sports science has changed a few things and then can go for 95 minutes now at a high tempo.

I found the Premier League quicker than La Liga when I played, but now the pace has gone even quicker. It is always great to watch. I remember when I played in England, there were a lot of big spaces on the field, but you don’t see this as much now.

Great fun talking to @TheDesKelly for @btsportfootball @btsport in a lovely location in Lisbon.
Chat about my career, @ChampionsLeague QF & one of the toughest test-type questionnaire I’ve ever had to answer 🤯😂
Watch it tomorrow #Club2020
Thnx @CelebAppearance 👌🏼#UCL #GM6 pic.twitter.com/Ur7H5Z9rfv

We often talk about the glamour of the Premier League, but can we describe Middlesbrough as glamorous?

It can be! Maybe not as glamorous as some other places, but I liked my time there. The people were very good to me, I had some memorable moments, especially winning the League Cup and reaching the UEFA Cup final.

We had a great team, we played good attacking football and it was a happy time for me.

You played in three European club finals in your career but didn’t manage to win any of them. Is that the big regret of your career?

Maybe, but there are always regrets when you play sport at the highest level. I played in two Champions League finals with Valencia and in the 2001 final, we had a penalty shoot-out to decide it with Bayern Munich. I took the first penalty and scored, but it was not to be for us.

Which European league is the strongest right now?

It depends on who you ask and which country they live in. For me, it is La Liga. In terms of individual talent and the technical level of the league, it is a step ahead for me. Young players get a chance to develop with all the clubs and the strength of the league is growing.

You look at Getafe doing well this season, Real Betis were in the Europa League last season, and this shows it is not just the big clubs like Real Madrid and Barcelona who have everything going for them.

Spanish teams have done well in the Europa League in recent years and this shows a good strength in La Liga. So while I like the Premier League and agree that it is very exciting to watch, I think the Spanish league still has a small edge over it.

Are you surprised to see Barcelona’s decline this season?

This is not a new story. They way they have been playing throughout the La Liga season was very up and down so we are not surprised to see them lose against Bayern Munich.

When you have Lionel Messi in the team, everything is possible, but this is not the Barca fans we expect to see. For me, there is no question about it that Messi is still the best player in the world, but one player cannot carry a team and we have seen that throughout this season.

Are you a fan of this tournament-style finish to the Champions League and Europa League this season?

Having games every day is great to watch and just having it as knock-out matches makes it brilliant. It’s like the World Cup of club football and the way it is being played, it opens up the competition for all the teams who might not be favourites to get to the end of the competition.