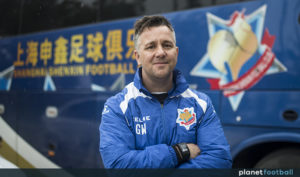 This picture taken on October 19, 2016 shows coach Gary White posing for a portrait during a practice session of the Shanghai Shenxin football club in Shanghai.
After making a splash on the tiny, honeymoon island of Guam, English coach White is already proving a hit in the cut-throat world of Chinese football. The 42-year-old, who left the palm-fringed Pacific island to manage Shanghai Shenxin earlier this year, has his eye on winning promotion to the Chinese Super League next season after saving the team from relegation. / AFP / Johannes EISELE / TO GO WITH Fbl-Asia-CHN-Shanghai-White,INTERVIEW by ALASTAIR HIMMER (Photo credit should read JOHANNES EISELE/AFP/Getty Images)