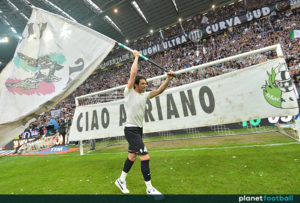 Juventus’ goalkeeper Gianluigi Buffon holds his team’s flag after winning the Italian Serie A football trophy, the Scudetto, during a ceremony after the team’s match against Atalanta on May 13, 2012 in Juventus stadium in Turin. Juve have officially won 28 titles due to having been stripped of their 2005 and 2006 successes for match-fixing and forward Alessandro Del Piero’s 19-year stay with the Old Lady Juventus will come to an end this summer. AFP PHOTO / GIUSEPPE CACACE (Photo credit should read GIUSEPPE CACACE/AFP/GettyImages)