You might think that punching a supporter on the pitch doesn’t sound like the smartest way for a young footballer to kickstart their career – but that’s exactly what happened to Graham Stack.

Stack was just 20 and without a senior appearance to his name when Arsenal loaned him out to Belgian side Beveren in 2002, but by the time he returned to north London the following year he could certainly say he knew what men’s football was all about.

And although he played 30 times for Beveren that season, there was one game in particular which, perhaps surprisingly, proved crucial in propelling him into the thoughts of Arsene Wenger going into the Gunners’ memorable Invincibles campaign of 2003-04.

Speaking on our podcast dedicated to 2000s football, The Broken Metatarsal, Stack says: “I came back and felt like a different player. I felt full of confidence. I not only improved physically but also the mental side of it, which is what Arsene Wenger kept going on about.

“You’re going to learn a new philosophy of football, a new culture. There were so many elements about going abroad which made me a better person, more responsible, more independent and so on.

“So when I come back, having had a successful season over there, Arsene Wenger then trusted me. He knew that I was prepared to make sacrifices, that not only had I spent a year over there developing, I’d also come back with a year’s experience.

“And my reputation blew up at one stage, I wouldn’t say for all the wrong reasons but for quite a comical reason in terms of knocking out a supporter.

“So that grabbed the headlines as well, not just my performances on the pitch.”

“It was just a crazy, crazy day,” Stack says about the game against Royal Antwerp.

“We were winning 3-1, but constantly in the second half I was getting hammered with objects – bottles, stones, coins, lighters, everything.

“It got to the stage where there were only five minutes to go and I thought, ‘Right, I’m throwing one back here, this is driving me mad.’

“So I’ve thrown one back and it just erupted.

“There was steel fencing at the front and I thought, ‘They’re not getting through that’, but then I looked to the right and there was a gate, and the steward on the gate must have been 70-odd.

“Before you know it, the ball’s at the other end, I’ve turned round and there are people marching towards me. I’m thinking, ‘What have I done here, where’s this going?’

“This big fella has got to be 6ft 4in, wearing a big leather jacket, and he’s come charging towards me, swearing at me. I’m thinking, ‘Should I just run off and save myself or do I try to confront this lunatic and stand my ground?’

“Your instincts kick in and I decided to front it, but then another one comes on and I’m thinking, ‘I’m outnumbered, I’m up against it here.’

“Actually, the big fella after giving it the big ‘un no longer wanted to confront me, but this fella who’d had far too many beers came steaming in and starting throwing digs.

“Naturally you swing one back, and naturally you drop him on the floor. Then the next big one didn’t really fancy it and they all started walking back.

“This happened in a few moments, but before you know it there’s riot police out and the game’s getting called off.”

“After the game it was mayhem,” he says. “I was on talk shows, I was on Jean-Marie Pfaff, who’s famous in Belgium, the best goalkeeper in the World Cup, I was on fly-on-the-wall documentaries, I was on Canal+, I was on all these different shows.

“It grabbed everyone’s attention because it wasn’t the Beveren goalie, it was the Arsenal goalie, and everyone wanted to know how good he was.

“So then a lot of people in football, scouts and agents, started to come to games, which benefitted me massively because not many people knew I was over there at the time.

“Before you know it, it was a big stage for me and I’d created that by that incident. I think if I was to go over there today, to this day I don’t think I’d be able to buy a drink. The way I got looked after was incredible really.”

Stack also told us on The Broken Metatarsal about breaking through at Arsenal alongside Cesc Fabregas, scoring a penalty in a shootout on his debut in the League Cup against Rotherham, getting his chance as the dressing room DJ and having his Werther’s Originals confiscated by Wenger.

And Stack says acting as back-up to Jens Lehmann that season was exactly as stressful as you might imagine for a young goalkeeper sat on the bench yet to make his Premier League debut.

“Can you imagine being a No.2 to Jens Lehmann?” he says. “I couldn’t sit down, I couldn’t relax because he’s throwing balls at people, he’s dragging people around the throat.

“I’m thinking, ‘He’s definitely going to get sent off this season.’ And the longer the season was going on you’re thinking, ‘You’re going to put me under so much pressure because we’re unbeaten and have two games to go, you’re going to lose your head and I’m going to have to play.’

“We’re going to get beat and it’s going to be my fault. So can you stop acting the goat?!

“The tension going into games and throughout games knowing that Jens can fly off the handle at any moment is quite scary.” 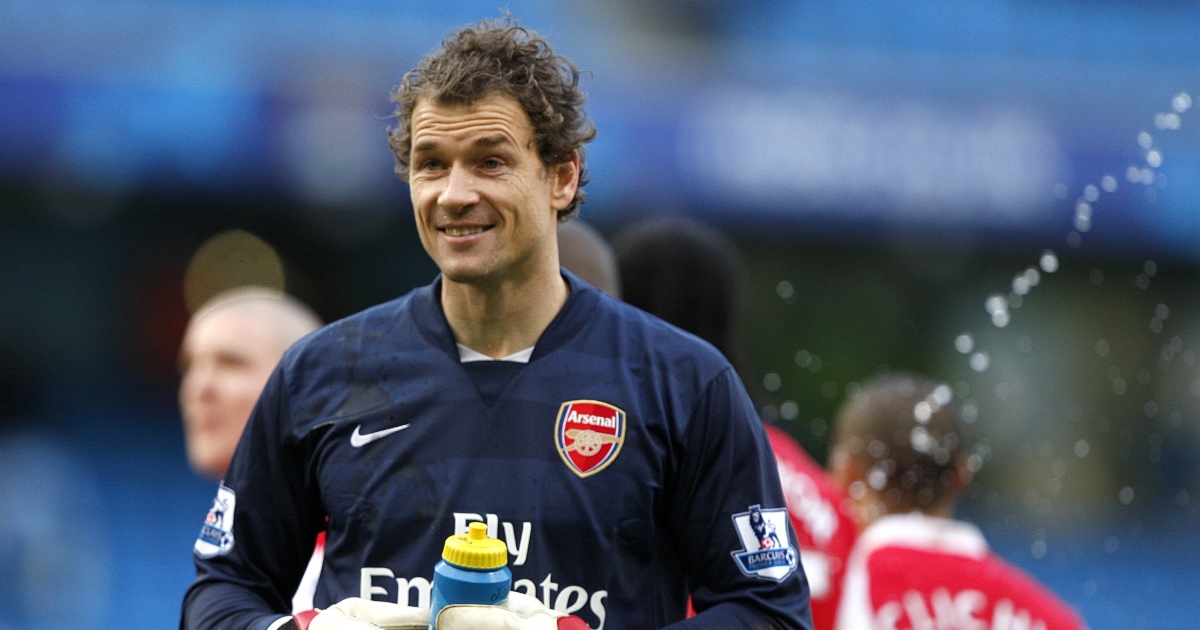 But the flip side of Lehmann’s character, and one that Stack says was prevalent throughout the squad, was that he never rested on his laurels, even after Arsenal had clinched the title at White Hart Lane.

“I remember after the game Jens was gutted because he felt he was at fault for the goal,” Stack says.

“Jens is in a strop so I’ve had to say, ‘Listen Jens, liven up, we’ve just won the league. Come outside and celebrate.’

“That was the standards Jens set himself.”

Listen to the full episode of The Broken Metatarsal with Stack and Arsenal fan Alex Brooker below.