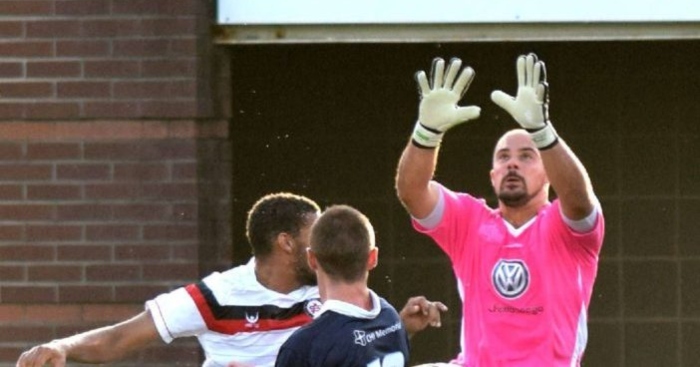 He backstopped Manchester City to the FA Youth Cup behind a defence including Kieran Trippier and Ben Mee. These days, goalkeeper Greg Hartley can play using any player he wants – in his life as a FIFA content creator and streamer.

It’s an unlikely career path but one that may become all the more prevalent with the rise of eSports.

Hartley, now 30, was part of the City team that beat Chelsea over two legs in 2008, playing alongside Daniel Sturridge, Dedryck Boyata and Vladimir Weiss.

Barely months after that victory, the club was bought by the Abu Dhabi United Group and changed almost overnight. For Hartley, his prospects of breaking through as a goalkeeper at the club were limited, especially with the signing of Shay Given from Newcastle, with Kasper Schmeichel and Joe Hart already at the club.

Leaving a club you’ve spent your youth with is tough for any player, but for Hartley it opened up a whole new world of opportunity.

“It’s different for a lot of people. I sort of expected it was going to happen. Truthfully, if there weren’t injuries that season when we won the youth cup, I might not have played,” Hartley says.

“I knew it wasn’t going to happen. I took every day as it came and took what I could from the experience. It wasn’t a difficult thing for me, but I know players who have found it difficult.

“I was only 5’10” so I didn’t even want to have an agent. I’d have to be extraordinary to make it as a professional, even though I had been at City.”

Watch the latest episode of Robins Round Up now with special Guest @Gregghartley_!

In the show, Greg talks about his highs and lows of his career as well as discussing life at Ashton!🔴⚪️

🎥Click the link to watch the full Video: https://t.co/tEp7pHxKj1 pic.twitter.com/LY5HiOKmzT

Hartley’s next move was to America, where he made the decision to accept a scholarship and study while playing at a decent level.

“It was the best decision I ever made. There’s a stigma that the standard of football it’s not going to be good, but you need to get out of that mindset. It was unbelievable.

“The facilities were like being at a professional club. There’s a lot of money in it. If you go to the right school, you will succeed. I ended up at a great college.

“But unfortunately, in 2017 I couldn’t get a new visa in the new Donald Trump regime and my life was over there. Everything came crashing down. I didn’t have football. I didn’t know anyone in the UK or have any contacts. I wasn’t in a great place. I just used FIFA content creation to go get away from that.”

He returned to the UK and started work as a goalkeeper coach at Oldham, as well as playing part-time in non-league for Atherton Collieries and current club Ashton United.

It was after departing his role at Oldham that he decided to take playing FIFA more seriously – though he admits he does get a few digs from his team-mates in the dressing room.

“They have a laugh about it. They say they’re going to beat me. But they know it’s a hobby and I enjoy it and they’re all sound for it. The people who don’t understand it try and make fun of it, but professionals can make £250,000 if they win a tournament.

“It’s good to see players I’ve played with on a computer. It’s not weird to me. I grew up with them and played since I was 10, so when I see them on the game it doesn’t faze me.

“I’m on Football Manager. I’ve been on the game in the youth team. When I was on the game as an Oldham coach, they always say I’m too expensive and I don’t want to move!”

Hartley has more than 8,000 subscribers on his Twitch channel, where he largely streams content from FIFA’s Ultimate Team on a daily basis.

He even helped former club Oldham get one of their players playing, when Football League clubs organised the ‘FIFA Quaranteam’ tournament during the first lockdown.

“A lot of people love FIFA. I know a lot about the game. I try to help people. I wouldn’t say I’d be good enough to be a professional eSports player, but maybe the broadcasting part could be an option.

“I’ve never done it for the money. I enjoy FIFA and at the time I was able to start streaming, I was doing it just for me. My content is all live, so I can chat to people, about FIFA, what’s going on in the world or just conversation about everyday life.”