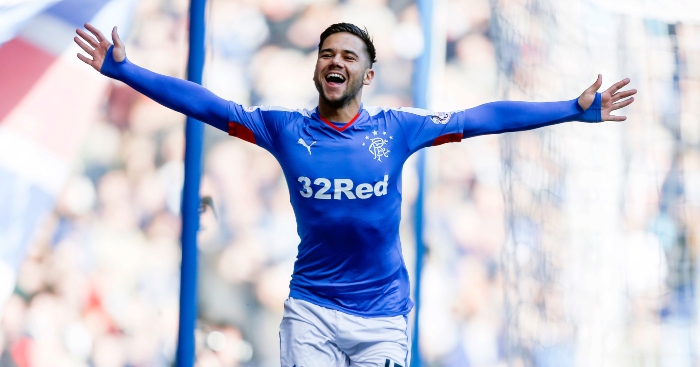 Harry Forrester turned down both Manchester United and Ajax as a youngster and now finds himself playing in America’s second tier – but he has no regrets.

The midfielder also spent six months in Iran prior to heading Stateside in January to sign for California-based Orange County SC.

He was tipped for the top as a young player with Watford and Aston Villa, and admits he has not fulfilled his potential, but nowadays he is simply focused on enjoying his football.

“There are lots of factors as to why that hasn’t happened, but I have now accepted it,” says Forrester, who is now 28.

“When I was 24 and 25, I was harder on myself because I was always chasing the dream of playing at a higher level.

“It reached the point where I just thought, ‘Whatever will be, will be,’ and that I was going to enjoy my football and not compare myself to everyone else. I was driving myself mad at times and it did become a bit overwhelming.”

California, with its slower pace of life, seems to be the perfect place for Forrester, who is more at peace with his career now than he has ever been.

He signed for Iran’s Tractor Sazi last summer, having found himself out of the first-team picture at Glasgow Rangers. Wales and Liverpool legend John Toshack took him to the club, who are based in the city of Tabriz, in the Islamic Republic’s north-west.

Former Celtic forward Anthony Stokes and ex-Motherwell and Leeds United striker Lee Erwin joined at the same time, although only the former remains in Iran.

“There were a few clubs in England interested in me, but I thought I would have nothing to lose by going to play in Iran,” Forrester says. “The football fanbase over there was way bigger than I could have imagined.

“John Toshack was quite a reserved and mellow guy, considering what he has achieved in his career, and I enjoyed working under him. I think it would have been more difficult for me had I initially had a manager who didn’t speak English.”

This is Harry Forrester. He’s become the first Englishman to sign for an Iranian club since the 1979 revolution. He spent last season at AFC Wimbledon on loan from Rangers. Next season he’ll be playing under John Toshack at Tractor Sazi. pic.twitter.com/AmMPudIuvY

Forrester was also impressed by the fans’ commitment to their club, as demonstrated when 40,000 of them travelled 10 hours to Tehran for a game against Esteghlal.

“Esteghlal are their biggest rivals and we had to take a 10-hour bus trip through the desert to get there, so to see 40,000 of them doing the same was a real eye opener.

“The biggest thing for me was getting used to the heat. I also spent a lot of time in my apartment doing stuff I wouldn’t normally be doing, such as reading and having time to reflect.

“Iran is a really nice country and the people were so friendly – they couldn’t do enough for me and were always trying to feed me, too.”

Toshack left Tractor in September and Forrester, having picked up a few injuries, found himself on loan at Tabriz’s other club, Machine Sazi, who play in the division below.

Having just made a handful of appearances, Tractor agreed to release him from his contract and he went on to sign for Orange County after being contacted by assistant manager Richard Chaplow, a former team-mate at Doncaster Rovers.

America’s West Coast is a far cry from Forrester’s formative years in Milton Keynes. The childhood Arsenal fan was signed by Watford when he was nine and, seven years later, was wanted by Aston Villa, Tottenham and Manchester United.

In a move which helps explain why he has happily gone on to play in Iran and the USL Championship in America, Forrester opted for Villa, believing they would offer him the best chance of first-team football.

“I knew I needed to be in a Premier League environment for the sake of my career,” he says. “I also wanted to be at a club where I would have the best opportunity at breaking through into the first team, so that is why I went to Villa.”

That chance never came, though and, following a loan spell in Scotland with Kilmarnock, in 2011 Forrester signed for Brentford after a trial spell at Ajax, where he scored a hat-trick for their reserve side that drew attention from then-manager Frank de Boer.

Once again, he turned down the bigger club in favour of more football.

“There were – and are – so many extremely talented youngsters coming through at Ajax,” he says. “Christian Eriksen was also playing in my position, so I thought it would be better for me to carve out a career at a lower division side and progress through that way.”

Forrester spent two years at Brentford and then another two with Doncaster before Mark Warburton, who had known him since his early days at Watford, took him to Rangers in December 2015.

“It was unbelievable to sign for such a big club and it was something I had dreamed about as a young boy. There is no better stadium to play at than Ibrox when all the supporters are behind you.

“My time there was quite short, but it was a great club to play for.”

Rangers 1-0 St Mirren@Harry_Forrester's late winner to put the Gers 11 points clear at the top of the table. pic.twitter.com/3nttUaHoAY

Forrester’s time at Rangers was effectively up from the moment that Warburton was replaced by Pedro Caixinha, but the midfielder denies suggestions he was banished from the training ground.

“That didn’t happen. When I went back for pre-season, Caixinha pulled me into his office and told me I wasn’t part of his plans, but it is not true that I was banned from the training complex.

“I was big enough and old enough to understand that these things happen in football. Caixinha was the nicest guy in the world, but he was not the best manager I have ever had.”

Forrester spent the 2017-2018 season on loan at AFC Wimbledon and he has since been reunited with his former Dons team-mate Liam Trotter at Orange County.

There is no promotion or relegation from the USL Championship, which he describes as being of a League One standard, and Forrester sees both positives and negatives in that.

“Because of that, you aren’t putting your livelihood on the line every time you go out on to the pitch,” he says.

“I do miss the competitiveness of English football, but it does not mean there is not a real professionalism out here. There are also a lot of technically-gifted players in the USL.

“I would 200 per cent recommend that British players who are struggling at their clubs come and play in America. I honestly know of guys in League Two who are better than some players in MLS. Maybe they should take a gamble and come here where they can hone their technical skills.

“I also think there are other players who are perhaps stagnating at academies who could put themselves in a different environment.”

Living next to the beach and just 45 minutes away from Los Angeles, it is no surprise that Forrester’s British-based seven-year-old daughter is a regular visitor, as are a number of his friends.

He retains an ambition to play at a higher level, but he is also contemplating the prospect of making the US his home for good.

“Once I have been at Orange County for a couple of years, I want to try and play in MLS, although I know that may be difficult because of the roster system and the foreign player rule they have in place,” he says.

“It is obviously a great lifestyle and maybe I can set up my life here after football.”

While things may not have panned out as expected when he was wanted by some of the biggest clubs in Europe, Forrester is philosophical about the direction his career has taken.

“Football can be the best job in the world because the rewards are huge, but there are so many lows, as well,” he says. “One minute things can be going well and then things turn on their head the next.

“I have learned a lot from what I have experienced in the game, including about life and about people and what it takes to reach a certain level.”

And he has does not have plans to return to the UK in the near future.

“I don’t know what is around the corner, but I am not coming home any time soon.”

Forrester has never been afraid to make tough decisions, but when it comes to deciding between rainy Britain or sunny California, that’s one of the easier choices he’s had to make.