It took Cristiano Ronaldo a few years after joining Manchester United to establish himself as the player we know today, but his enormous talent was obvious from his very first training session.

Ronaldo joined United as an 18-year-old in 2003, famously after impressing a number of their first-team stars when playing against them in a friendly for Sporting Lisbon.

And if there was anyone at the club who wasn’t aware of what Ronaldo was capable of, they soon were.

Speaking on the new episode of our podcast, The Broken Metatarsal, Eddie Johnson, a youth player at the club at the time, vividly remembers Ronaldo’s first day at training.

“I know he’d given some of the first team a hard time in the friendly just before he signed and people were talking about him,” Johnson said.

“He appeared at the front entrance at Carrington and I remember seeing him thinking ‘who’s this kid?’ because his gear was terrible. He was in some terrible roll neck and really tight washed-out jeans.

“Someone says that’s Ronaldo, the new signing, then we go out to train.

“I was still quite young, but I was training with the first team and we did the 5 v 2 warm-up like we did every day, and he did the most audacious bit of skill and put it through the legs of one of the other young lads.

“He’d confused him that much that he’d crossed his feet together and ended up landing flat on his face. Everyone was looking round going ‘there’s a player here’ so from that day on it was pretty exciting.”

Ronaldo would soon announce himself to the wider world with an outstanding debut as a substitute against Bolton that had The Guardian’s Daniel Taylor comparing the youngster to George Best, but he failed to reach double figures in each of his first three Premier League seasons and was often accused of lacking an end product in those early days.

“No one actually thought he’d get to the heights he’s got to now,” Johnson says. “Everyone knew he was a talent and he could change games and he was exciting to watch, but Ruud van Nistelrooy got very frustrated with him in terms of making runs into the box and Ronaldo would like to take the full-back on three or four times.

“I think they were all questioning his game management and his delivery into the box. Ruud was used to David Beckham crossing or Ryan Giggs crossing and he’d get on the end of it all day long.

“Ronaldo just enjoyed the show side of it to start with, and I don’t think anyone thought he’d go on to achieve what he’s achieved now.

“But he still had that desire to improve and be a pro. You could see he had that desire and that work ethic, it was already instilled in him. He was just young and full of energy and skill and talent.”

And in Sir Alex Ferguson, Ronaldo had the perfect mentor to harness that talent.

“It was really down to the manager,” Johnson says. “I know he talks about how much he respects the boss, and what he did for him, and I think it was the manager that took that talent and directed him in a way that he could get the best out of him.

“It was just the guidance the manager give him in terms of his game management and how he was going to fit within the manager’s style. 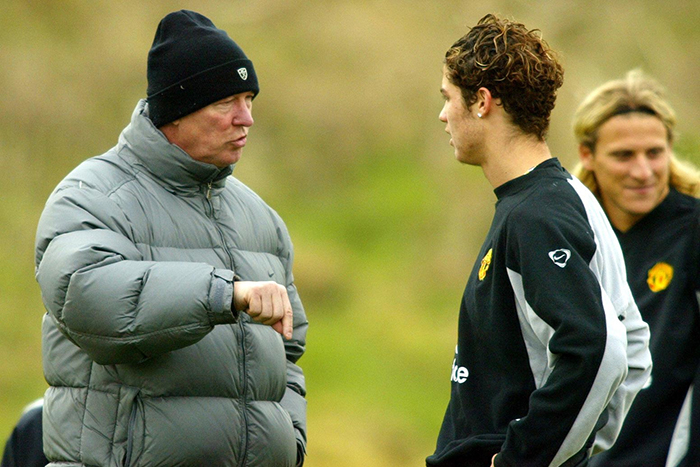 “The manager was a father figure to him because Ronaldo’s dad had his issues and had passed away so I think the manager took on that role and I think that’s one of the main reasons why he got the best out of him.

“The lads give him a bit of grief. They’d say your dad’s here or if there was ever any issues they’d say go and tell your dad about it. But it was all fun and games, and the relationship in the end proved to the best for Manchester United and Cristiano.”

United did not win the Premier League until Ronaldo’s fourth season with the club – it was the first time they had gone more than one season without winning it – but Ferguson’s faith in the young winger certainly paid off in the end, culminating in that sensational 2007-08 season in which Ronaldo scored 42 goals as United won the league and Champions League double.

And we remember the building of that fantastic team in the latest episode of The Broken Metatarsal, which you can listen to below.