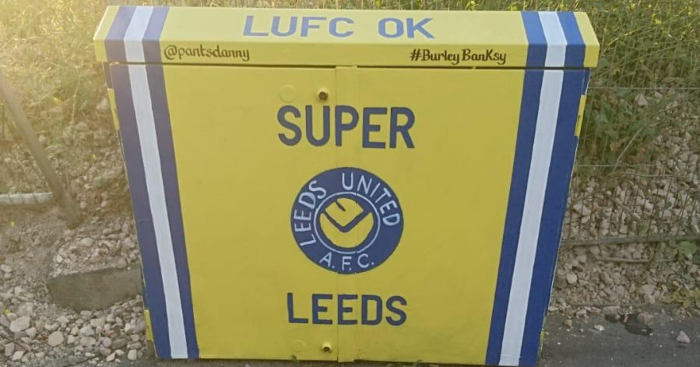 “And Leeds will go mad. And they’ve every right to go mad.”

Barry Davies’ shrieked commentary is ingrained in the psyche of Leeds fans. The moment when Jeff Astle’s seemingly blatant offside goal for West Brom played a huge part in Don Revie’s men losing the title in 1971.

A few weeks ago, we brought you the story of Andy McVeigh, aka ‘Burley Bansky’, brightening up the streets around Elland Road with his Leeds United-themed artwork on communications boxes. A lovely tale of a man doing his bit and raising a smile via little labours of love.

And then a few days after we spoke, someone destroyed them. Weeks and weeks of painstaking work wrecked on one night of targeted vandalism.

It was fair to say that Andy would go mad. He had every right to go mad. And yet, he didn’t. There was shock, sure. And anger. But no knee-jerk reaction to fight or seek retribution. Andy had to think this one through.

But while he wrestled with the emotions in his head, something rather wonderful happened.

Word got around via social and then mainstream media. People were appalled by what they’d read and seen with their own eyes. Messages of support started to pour in. Andy, to his bemusement, had become a cause celebre.

“I went into the post office to buy a Twix and there I was on the front page of the Yorkshire Evening Post,” he recalls with a shake of the head.

“There’s me with the caption ‘Devastated’, although I didn’t actually say devastated! But then it went mad on Twitter. I was getting hundreds and hundreds of messages.”

Things began to move fast. Such was the outrage and desire to help, a Leeds fan set up a JustGiving crowd-funding page.

Wankers have vandalised the Burley Banksy's brilliant #LUFC artwork around Leeds. @pantsdanny pays for everything out of his own pocket and makes the city a much brighter place.

A crowdfunder has been set up to help restore the work: https://t.co/jOvDkVHepX pic.twitter.com/6HQaTc6wOR

“A girl called Danielle, who I spoke to on the phone, lovely girl, she started that. I didn’t know about it until a few days later as it was done on Facebook and I don’t do Facebook, and it’s raised two-and-a-half thousand quid which is just phenomenal. The target was £500.

“And then another bloke did one which raised £350. I should be getting all that money soon. It’s great because I won’t have to worry about buying paint anymore or brushes.”

Andy is a supply teacher – work comes and goes – so the unexpected funding was a godsend.

“I’m going to take some time off supply so I can pay myself a day’s supply wage and then get these re-done as quickly as possible,” he says. “Then again, it’s been bloody raining non-stop, although I’ve done a bit in the evenings already.”

Such was the attention locally, the repaint wasn’t as straightforward as it might have been. Andy is a huge fan of Woody Allen’s early loser comedy and was in danger of acting out a scene himself.

“The irony is, I nearly got beat up twice as people thought I was the vandal doing it again! A bloke came up to me and shouted, ‘I’ve got yer registration.’ So I had to say, ‘It’s me, I’m Andy, it’s fine, it’s fine,’ and prove to him it was me by showing that I was covered in paint.

“So I thought I better put a tweet out with a picture of my blue van on it as people were claiming on Facebook that some thug in a blue van was painting over them. Imagine getting beat up by your own supporters!”

People thought grafitti vandal was out again tonight but it was me re- painting the #lufc boxes! If you see this van(I know, it's a babe magnet, calm yourselves ladies) covered in Leeds Utd stuff, & a bloke looking like a walking Stone Roses album sleeve it's me. If it's pic.twitter.com/MzEIcw1HQd

As well as narrowly avoiding a right pasting, Andy’s story then, in his own words, turned “surreal”.

The club had been made aware of the vandalism and, soon after, they issued a press release. It read: “The art displayed by Andy is important to Leeds United and the city. The designs depict some of the most impactful players and kits from our 100-year history and you can see from our supporters’ reaction to the recent damage caused to the cabinets and how much it means to us all.”

“They were fuming about it. They said, ‘Right, we’re going to pay you, commission you to repaint them.’ When it’s commissioned artwork like that, it’s then officially illegal to deface them. They got together with the council and the Virgin Media people so it’s all been approved by everybody.

“They also gave me a Leeds shirt with ‘Burley Banksy’ on the back. That was amazing. I had this photo with them and I could pretend I was signing for Leeds, holding the shirt up like they do.

“The reality was we were stood outside the Subway near Elland Road where there was a meatball marina on the floor but, in my head, I was in the west stand imagining it was 1990 and Howard Wilkinson saying, ‘We think this lad can do a job for us.’ I’d be joining Batts and McAllister.

“And then they invited me and my boy Danny down for the Derby game and we had VIP treatment and sat in the directors’ box, which was amazing.

“Some of them knew who I was. ‘You’re the art fella,’ said Kalvin Phillips, while Bielsa shook my hand and said, ‘Congratulations on art.’ We had a picture and I gave him a little note in Spanish saying thank you for everything you’ve done for our club.

“I tried to read it and he was kind of chuckling. There was this word with about 20 letters in it. James (Mooney) said Bielsa actually kept the bit of paper as things like that mean a lot to him, which is really sweet.

“And now it’s just taken off. I’m going to do one on Kalvin’s street in Wortley, where he grew up. They’ve already painted the box white in preparation. And then I was chatting to Mateusz Klich, and he’s into street art apparently. And he wants to do a painting with me.

“Me and Danny were like, ‘This is mad here, doing a painting in the street with Klich!’ 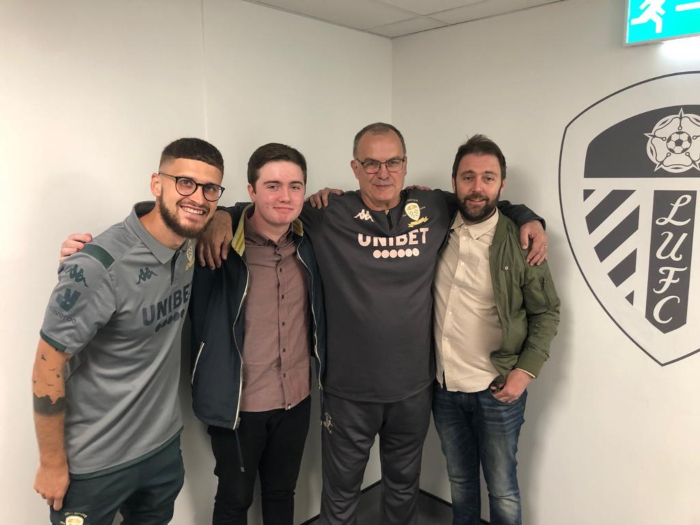 “The club are really trying to do more community stuff. We had these horrible owners in the past who seemed against Leeds fans, it was horrible really. I said to James, ‘Thank you so much,’ but he said that it’s what Leeds should be doing.

“That this is what clubs should do. Leeds haven’t been, and he wanted to change that.

“Andrea Radrizzani (Leeds’ owner) says there are some spaces inside some concourses in one of the stands and he wants some paintings in there. So he said we’ll talk about that later when I’ve repainted all of the street ones. That would be amazing.

“And me and Danny have also been offered tickets whenever we want, which is fantastic. To not have to worry about getting in is brilliant as it costs a bit for me and Dan to go and sometimes I genuinely haven’t got it.”

And the commissions are starting to come in more and more. Andy is doing one for mental health charity, Mind, at Holbeck Community Centre, another – “a massive one, literally 30-foot tall” – for a charity trying to save a football pitch in Wortley where Leeds legends Paul Reaney, Paul Madeley, David Batty and Noel Whelan started as kids.

And the council are going to pay him to do a series of smaller ones around the wall of the famous Leeds Outdoor market – “not for loads, but the money I’d earn teaching.”

But while Andy battles with the feeling of imposter syndrome – “I’m not exactly Andy Warhol… although then again he was no great shakes either to be fair” – perhaps something deeper has been stirred.

While inadvertently uniting a community – “I love it when bus drivers beep their horns at me and shout, ‘Get ‘em done again, Andy’” – he could be about to take a more direct approach.

Andy lost a good friend to suicide, has struggled himself and one piece of his artwork – among those cruelly destroyed – was a tribute to Gary Speed, who took his own life.

“Suicide has become really prevalent in the last few years. The suicide figures are scary for men my age. And, as cheesy as it sounds, if it would help some blokes for me to just talk about it and say I did this art stuff because I was struggling a bit, then that’s a good thing isn’t it? 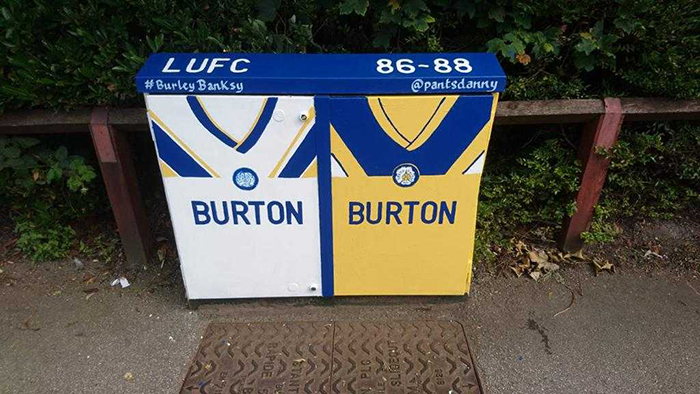 READ: Burley Banksy: The artist celebrating Leeds United in his own unique way

“My mate Scott also rang to see if I’d go into a school in Bramley where I did a term of supply because they’re doing a topic on Banksy, so he said it would be perfect to get in the sort of naff local version. I’d maybe do some kind of mural with the kids. And there’s another school who want me to go in, my friend’s a teacher there.

“Another friend works with kids who have been expelled from school and they’re going through that process of trying to get them back in school and I could go in and have a chat, do some work with them.”

Andy didn’t plan it this way. But having his artwork ruined has opened up avenues and opportunities not just for himself; it could lead to him helping others get their own unlikely break.

As he says while finishing off a cup of coffee and heading to the paint shop: “It’s amazing how much positive stuff can come out of something so negative.”

Community 1 Vandals 0. Andy, the club, the fans….Leeds should be proud. And they have every right to be proud.

Burley Banksy: The artist celebrating Leeds United in his own unique way