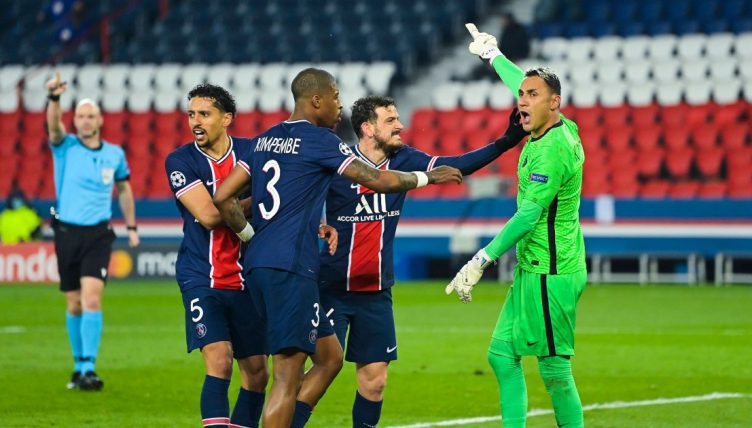 When Lionel Messi stepped up to take a second-half penalty, PSG fans would be forgiven for thinking ‘not again’.

Their expensively assembled squad has made Champions League collapses something of an art form in recent times; Marcus Rashford’s last-minute penalty in 2019 springs to mind, but the ‘remontada’ outweighs everything else.

Back in 2017, PSG took a 4-0 lead to the Camp Nou but inexplicably lost 6-1 in the biggest act of self-destruction since Jeremy ate Mummy.

While the two teams have moved in opposite directions since, another Barca goal on Wednesday night could have instigated the mother of all meltdowns.

Keylor Navas thought otherwise. Messi hit his spot-kick hard and straight, but Navas dived to his right and blocked it with his legs (even if replays suggested the penalty should have been retaken). As the ball spun up onto the crossbar and was eventually scrambled away, two things could be observed.

First, Barcelona visibly deflated and never truly threatened to make a comeback afterwards. We may now have seen the last of Messi on the Champions League stage – at least in a Barcelona shirt.

But, beyond the obvious headlines, Navas had made himself the hero of the tie. It was he who stood strong when the possibility of ignominy raised its presence once again like the spectre at the feast.

Denying a Lionel Messi penalty when it mattered most…

“[Navas] was incredible, he had a fantastic night and he’s one of the best goalkeepers in the world,” Mauricio Pochettino told Marca afterwards. “He showed that tonight, and we’re in the quarter-finals partly thanks to him.”

Midfielder Marco Verratti added: “He’s done it more than once, he won the Champions League three times with Real Madrid. Tonight he showed what a great keeper he is. We’re happy to have him in Paris.”

And even Barca boss Ronald Koeman had to express his admiration: “Their ‘keeper was player of the match.”

The question we should be asking is not whether Navas is one of the world’s best goalkeepers, when all available evidence suggests he is. Rather, why does the Costa Rica custodian remain so underrated?

‘Things do not just fall from the sky’

Upon signing for Real Madrid in 2014 after an impressive stint at Levante, Navas found himself behind club legend Iker Casillas in the pecking order.

At first glance, this seems understandable. Until you remember Casillas’ performance against Holland at that summer’s World Cup in Brazil at the same time as Navas had shone in a Costa Rica side that reached the quarter-finals. The man in the ascendency was forced to defer to a Real icon.

The Spanish goalkeeper left the following summer and Navas was given the No.1 jersey. Yet Real Madrid, who continually amaze in not giving one solitary eff, spent the 2015 transfer window aggressively pursuing David de Gea.

On deadline day, Navas agreed to move to Manchester United in part exchange for De Gea and spent the day anxiously waiting by the phone. By his own admission, it ended up being one of the worst days of his life.

After the deal fell through, primarily due to a dodgy fax machine, Navas related the experience of what should have been his last day at the club to Spanish radio station Cadena COPE.

“I cried that night when I found out I was staying, it was a build-up of emotions. I didn’t want to leave, Madrid is my home,” he said.

“I never wanted to leave Real Madrid. My agent told me to be alert to my phone. We had to go to Barajas [airport], although I never actually got on a plane – I was in a waiting room.

“I thought that if God wanted me to leave Madrid, it would be for the best, but he didn’t want me to and I’m still here.”

Eventually, Navas refused to doubt himself any further, telling The Guardian’s Sid Lowe: “I won’t sit in the corner, crying, waiting for people to give me things: things do not just fall from the sky. Hard work is the basis of everything.”

Navas started all three finals and would have been justified in feeling satisfaction at reaching the summit of European club football. But, like a teenager swiping on Tinder, Madrid thought they could still do better.

‘Navas is The Messiah’

The summer of 2018. Another World Cup has passed and Real are signing another goalkeeping star from the tournament. Navas had been the beneficiary four years previously but now Belgium stopper Thibaut Courtois was purchased from Chelsea.

Navas won the 2017–18 Champions League Goalkeeper of the Season award but made only 21 appearances the following campaign as Courtois overcame initial struggles to establish himself as first choice.

The time had come for a fresh challenge and PSG were the beneficiaries. Despite being 32 upon moving to France, Navas was still an elite goalkeeper in his prime. Thursday’s L’Equipe headline should convert the remaining doubters.

That becomes less surprising when you learn of his dedication to his craft. In 2015, Lowe wrote: ‘There’s a quiet, straight toughness to him, a conviction and clarity that brokers little argument, a competitive determination and belief that’s unwavering.

‘His focus is such that even some team-mates find it a little intense, almost comic at times but beneficial too: a silent strength that helps to explain that what happened in the summer not only failed to sink him but actually appears to have empowered him.’

During his time at Levante, Navas honed his talents through endless repetition on the training field and analysing his previous performances in the quest for self-improvement.

All this stood him in good stead for the goldfish bowl environment of PSG. While Neymar and Kylian Mbappe attract the headlines, Navas could carry on being excellent in his understated manner.

His new club made the Champions League final in 2020, even if they benefited from a soft run of opponents to get there.

While they lost the showpiece match to Bayern Munich in Lisbon, Navas finished the campaign with five European clean sheets. Only Manuel Neuer kept more.

After dumping out Barcelona, PSG will fancy their chances of reaching a second consecutive final in a few months. With Pochettino tasked with constructing a coherent structure to utilise the club’s superstars, Navas will be trusted to provide a reliable last line of defence.

And he won’t be lacking for motivation if Real Madrid remain in contention. “In Spain, I felt like some people within the club didn’t believe in me,” he told PSG’s official website. “I will always be thankful to the fans for the support they gave me and also to the team-mates, who always believed in me.

“Things are a bit different here in PSG, everybody believes in me and I try to respond to that support with confidence.”

If PSG win their first Champions League title in May, then Navas’ messianic status will be secured.