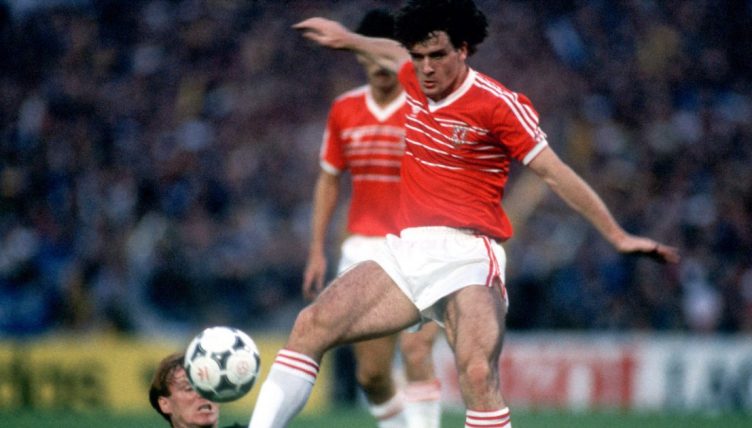 The 2020-21 season was exhausting for players, a fact which could have a bearing on the Euros this summer. With the pressure put on the football calendar, everyone had to get used to a full-on fixture schedule.

For the big clubs competing in Europe, the games came non-stop. In one week in May, Manchester United played three times. But for Mark Hughes, one of their most illustrious former players, even three matches in seven days would have seemed like a cakewalk.

Hughes, who won two league titles and three FA Cups at Old Trafford, once played two games for two teams in two countries in nine hours. It was November 1987 and, as Hughes says at a Betfair event: “I’d just signed for Bayern Munich on loan from Barcelona, the week before.

“I played [for Bayern] on the Saturday, and I was supposed to fly out after the game to meet up with the [Wales] squad, but we got fogged in so I couldn’t make the flight. I ended up going back to Uli Hoeness’ house and having dinner with him.”

As the evening progressed, Bayern CEO Hoeness inquired as to what time Wales were kicking off on the Wednesday. “I think it’s an odd one, it’s a midday or one o’clock kick-off,” Hughes replied.

Hoeness needed no second invitation. “[Bayern] had a cup game on the Wednesday against Borussia Monchengladbach,” Hughes continues. “So he said, ‘Well, you’ll be able to play the Welsh game and then you can play for us later on.’

“I’m thinking, ‘What are you talking about?’ It just doesn’t happen. But apparently, he’d done it with a previous player, Soren Lerby, who was a Danish international.

“So, [Hoeness] made arrangements and came to our game, the Wales game in Czechoslovakia – the distance wasn’t that long [from Munich]. We got beat with Wales, unfortunately. I wasn’t in the best mood, I was knackered as well.”

But on they went, into the car and onto the plane back to Germany. “We actually went over the [Olympic] stadium as the game was going on, floodlights were on, could see the stadium, all the fans.

“I ended up getting there at half-time, they got me ready and then about 60 minutes or so into the game, they put me on. We were losing at the time, I can’t remember if it was 1-0 or 2-1, but we were losing. On I went, and we ended up winning the game.”

Was he the match-winner after such an odyssey? “I was just getting to that point,” he chuckles, “It was nothing to do with me. I came on with [Karl-Heinz] Rummenigge’s younger brother Michael, double substitution, and he scored two.

“I don’t think I touched the ball if I was honest, but I got all the headlines because I’d played two games in one day. I took the glory from him. He was the hero, really.”

Hughes thinks Hoeness made the decision to play him mostly for show. “All the Gladbach players were looking around thinking, ‘How the hell’s he here?’ Maybe it was a bit of disruptive therapy.”

Hughes adds: “I think it helped me to ingratiate myself with the Bayern fans, just because I was prepared to come back and try and win a game for them.”

That he agreed to Hoeness’ hare-brained plan certainly showed Hughes’ commitment, to his country as well as his new club. It was a commitment he continued to display over his 15-year career as an international player and five-year stint as Wales manager.

His biggest disappointment, he says, is that the dedication he demonstrated was never rewarded with qualification to a major tournament.

“It was really difficult for Wales to qualify for major tournaments,” he says, “because we were always the third or fourth seed in a group of four. That meant you had one of the big hitters, you had an England, an Italy, a Germany to go up against.

“But we’d get in good positions where you think, ‘This is the time we’re gonna do it.’ I was involved in three play-offs, two as a player and one as a manager and those were really disappointing moments.

“When I was a manager, we had a play-off against Russia. We went to Russia and got a 0-0 draw and brought them back to the Millennium Stadium and got beat 1-0. I’ve never been able to watch it again. At the time it was too painful.

“As a manager, you’re trying to affect everybody’s performance and make sure they’ve got the best opportunity. It’s probably more satisfying as a manager being able to produce a winning team than, on occasions, being part of a winning team [as a player]. But [the defeats are] a lot harder as a manager.”

Now, though, Wales have qualified for back-to-back European Championships. For 2021, Hughes says, “there’s more expectation as a consequence of how well we did last time. I think it’s very, very difficult to replicate what we did before.

“But we certainly can get out of the group stage, depending on that first result, if we can beat Switzerland. That’s the key to it.

“If we can get through that, then we’re into the latter stages, it’s a knockout situation. We’ve got big-time winners, in terms of their careers, like Gareth Bale.

“We’ve got key players who can turn games to your advantage – Daniel James, good pace at the top end of the pitch. So, we can hurt teams in a knockout situation, as we did before. Let’s hope we get to them latter stages and we’ll see where it takes us.”