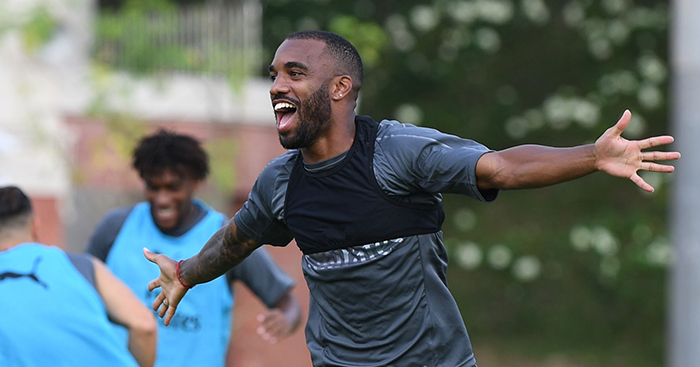 No matter what level of football you watch, there’s bound to be at least one moment every weekend when you’re sure you could do better.

Whether it’s a striker missing an easy chance, a midfielder misplacing a five-yard pass or a defender mistiming a tackle in the penalty area, sometimes the pros make mistakes so basic that we can’t help but wonder if it should be us out there.

The only trouble is, while we might score the tap-in or make the easy pass, there’d be another 89 minutes to worry about. And as much as we kid ourselves otherwise at times, footballers get through a lot of work. Even the so-called lazy ones.

With clubs able to see how much distance players cover in a game, what speeds they reach and how often they break into a sprint over the 90 minutes, they simply can’t get away with taking it easy. If they do, they won’t stay in the team for long.

This kind of physical tracking data has long been collected by companies such as Prozone, while a more recent development has seen clubs using GPS vests to track their players’ workload and intensity in training, too.

And in 2015, the International Football Association Board approved the use of wearable tracking devices during games, allowing clubs to see in real time who is putting the effort in – and who isn’t.

The GPS vests undoubtedly represent one of football’s greatest technological advances of recent times, and now they’re available for amateur footballers to buy, too. 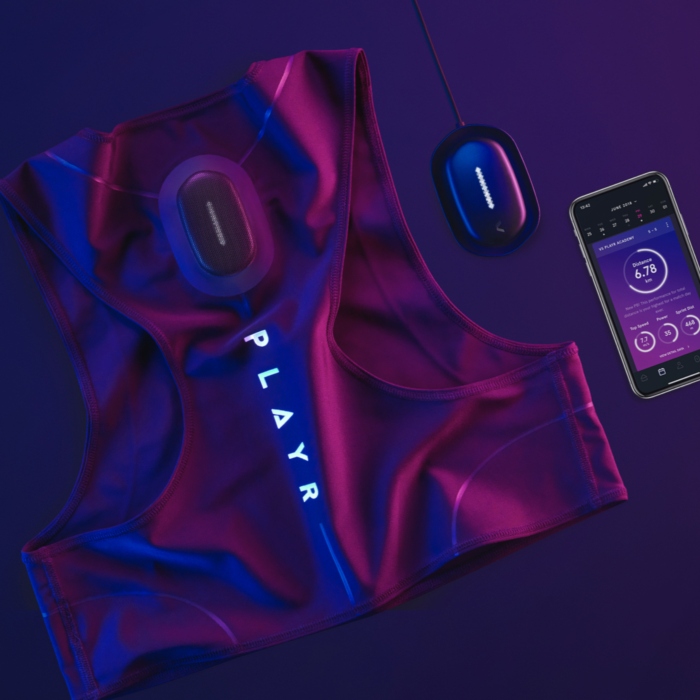 Produced by Catapult, who provide vests to clubs including Chelsea, Tottenham, Bayern Munich and PSG, the £199 PLAYR system incorporates a vest, a small SmartPod which is placed into the vest and fits comfortably between the shoulder blades, and a charging dock.

Stupidly, I decided to wear one of these vests in my Saturday morning league and compare my results to the professionals…

First of all, some mitigation.

I’m 33, and though at 6ft 3in and 13 stone I may look a bit like a footballer, it’s fair to say I’m lagging behind a bit in the fitness stakes. I blame the booze.

But I’ve been playing every Saturday morning for six seasons now, originally as a centre-back but more recently as a centre-forward. Just call me Gary Doherty.

I’ve been our top scorer for the last three years and I’d scored two goals in the first two games of this season going into this little experiment so I was feeling pretty good.

We won this game too, 3-1 against a team that had won their first two, making it seven points out of nine for us. I didn’t score, but I did get two assists and, for the first time in years, I got cramp. I gave about as much as I possibly could.

Then I got home and downloaded my data…

‘Taking it steady today?’, it asks. ‘Looks like you took that game pretty easy. Was that the plan?’ You what, mate? I’m knackered!

This isn’t doing my confidence much good. 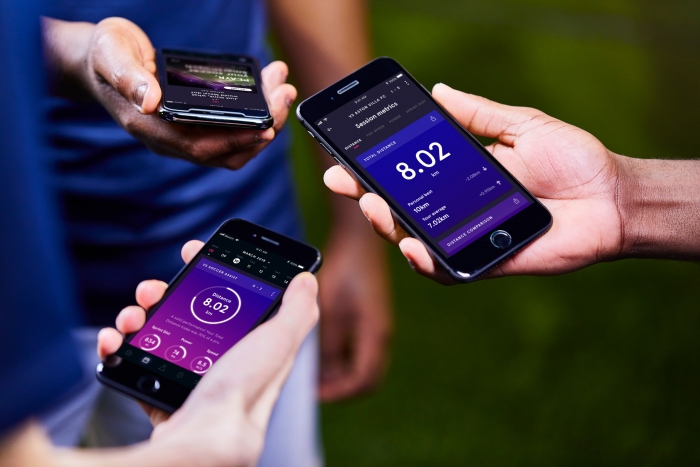 It turns out I covered 8.04km, which the app informs me is well above the 7.43km ‘community’ average but some way short of the 10km the average professional centre-forward covers in a game. But come on, give me a break. I’m happy with that.

Cleverly, the app also breaks down my distance into five-minute segments to show my most active periods and when I tired.

It’s maybe a tad concerning that my most active five minutes was 5-10, but the bar chart doesn’t actually look too bad. I actually cover almost as much ground in the second half as the first.

A third screen shows my heat map. This is brilliant. I’m an amateur footballer, playing on a Saturday morning, and I can see my heat map. Amazing.

In the first half I stayed almost exclusively in the opposition half – we were on top, were 2-0 up at half-time, and I stay up when we defend corners – but in the second half I dropped off a lot more – we conceded quite early and were under the cosh a lot until scoring late on.

I’m ignoring the app and giving myself a big pat on the back.

Unfortunately, things do get worse. My top speed is clocked at 7.3 metres per second, which is below the community average of 7.6 m/s and some way off the pro centre-forward’s average of 9.2 m/s.

Out of curiosity, I search for the slowest Premier League players and come across an article listing the 20 slowest top speeds clocked in the opening month of the season.

Get this: after three games, James McArthur, Nathaniel Mendez-Laing and Granit Xhaka all recorded top speeds slower than mine. Hang your heads in shame, lads.

Several more, including Juan Mata and David Silva, fared only marginally better. I’m in good company here. I could play in the Premier League and not be the slowest player. Get in there. 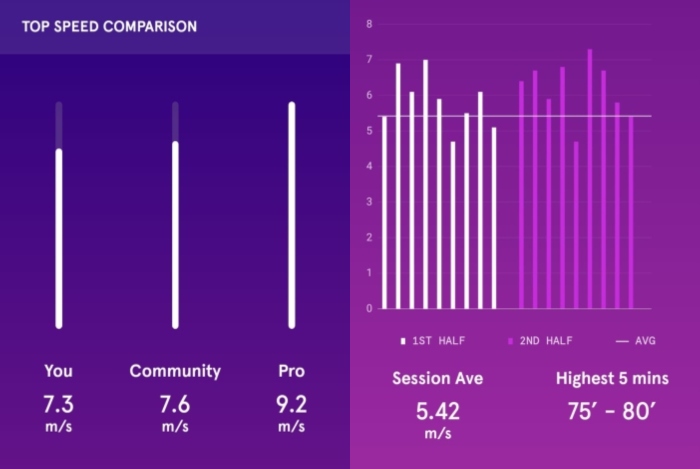 Sadly, things get worse still. I sprinted for 581 metres during the game, well down on the 630m community average and a massive 960m covered by the average pro.

Should I be closing down defenders more, or are my team-mates not giving me enough passes to run on to? If you’re reading, lads, I’m going for the latter.

I’m also taking great encouragement from the fact that I sprinted more in the second half and was most active from 75-80, which I’m pretty sure is when I got cramp. See, lads, I told you I was a team player. 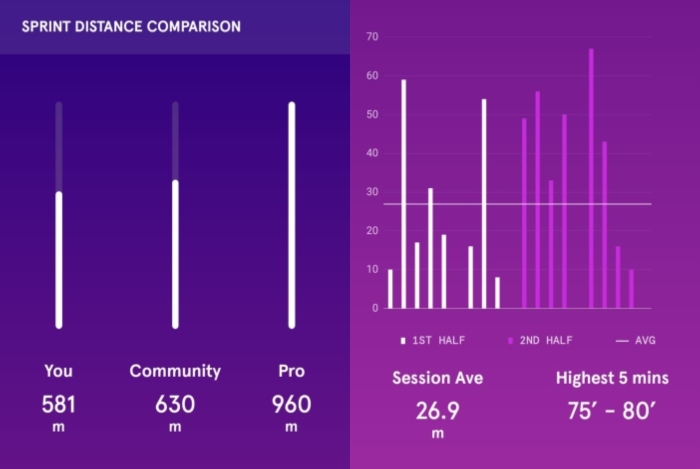 The app also lists the number of power movements I made during the game, which can be sprints, sharp accelerations or decelerations.

It turns out I made 44, bang average among the community but significantly less than a pro’s 78. It might make me think twice the next time I shout at a player for not sprinting to close down the keeper in the 85th minute. Actually, it probably won’t.

Again, the data is broken down into five-minute segments, while another map shows exactly where each power movement was performed. For an amateur footballer, this really is extraordinary stuff. I’m hooked.

It’s unlikely any Premier League scouts will be at my next game, but I can sleep pretty easy about these results. I’m quicker than James McArthur, covering more ground than your average amateur, and working almost as hard in the second half as in the first. Maybe my body isn’t quite as ruined as I thought.

As for the PLAYR system, it’s brilliant. For anyone who takes their football seriously and wants to improve, this is a dream come true.

Just don’t agree to write an article about it…

The PLAYR system is available to buy for £199 from www.playrsmartcoach.com.