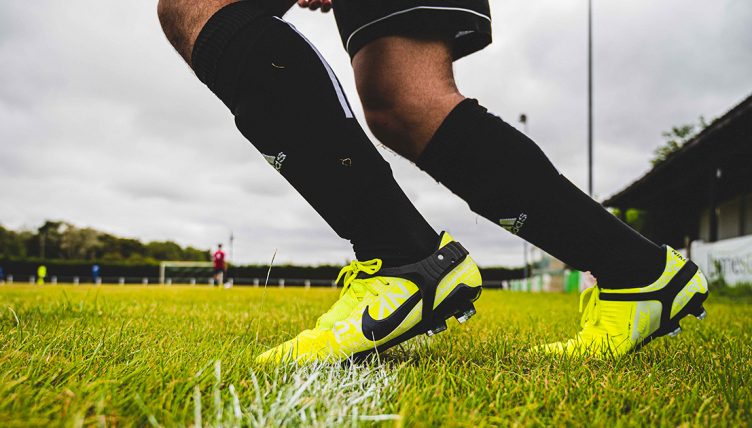 You can’t hide on a football pitch. It may be a cliche, but it’s one we all believe to be true. If you’re not contributing, people are going to notice.

In March 2019, I wrote about a new motion sensor that straps to boots and allows football clubs to not only track their players’ physical data but collect technical insights such as number of possessions, number of touches per possession, releases per foot and more. If ever there had been a hiding place before, there certainly wasn’t one for anybody wearing these.

As a terribly unfit amateur footballer with a left foot for standing on only, I summed up the article simply by saying: “We’re glad we’ll never have to wear these.”

Playermaker, the company behind the tracker, clearly took that as a challenge. Because two years down the line they got back in touch to say they had launched the UNO, their new tracker aimed at individuals, whether they be academy players looking to improve their game or amateur footballers like me.

More than 150 elite academies and clubs including Fulham, Rangers, Norwich, Millwall, FC Copenhagen and the Argentinian FA have used Playermaker’s technology since 2017, but now anyone seeking a competitive edge can buy the UNO to access all these insights, benchmark themselves against pros in the app, see where they need to improve and maybe even use the data to help win them contracts a la Kevin De Bruyne.

As for me, despite my brain screaming at me that it could only end in humiliation, I agreed to not only wear the UNO kit but share my stats on the internet.

I have previously worn a GPS vest, which was embarrassing enough, but now I was about to find out not only how much I have regressed physically but also how bad I am technically.

In fairness, it did seem like a pretty good time to do it. I had scored four goals and set up three more in my two games prior to wearing the UNO, we won those games by an aggregate score of 10-2, and our next game looked well winnable too, against a team beneath us in the table.

You all know what happened next. We lost 4-2 and I didn’t score or assist. Obviously. From the moment I had agreed to wear the UNO, it was bound to happen. It was up there with the most inevitable results of all time.

And to make matters worse, I’d spent pretty much the entirety of the second half moaning that I wasn’t getting the ball. As a centre-forward, there are games when it feels like you’re involved every time the ball’s in the opposition’s half and games when, for whatever reason, it just will not come to you. This was one of those games.

Was it a deliberate ploy by my team-mates to make my stats look worse? We can’t rule it out.

Before we get to said stats, some mitigation. I’m 36 in June, it was a red-hot day and I’m still feeling the effects of breaking my tibia and fibula in October 2018.

So that at least justifies some of the less-than-impressive physical data the UNO returned from my first 90 minutes wearing it. As for the technical data, well, I don’t really have an excuse for that. I certainly can’t blame the UNO kit because after a few minutes I forgot I even had it on. 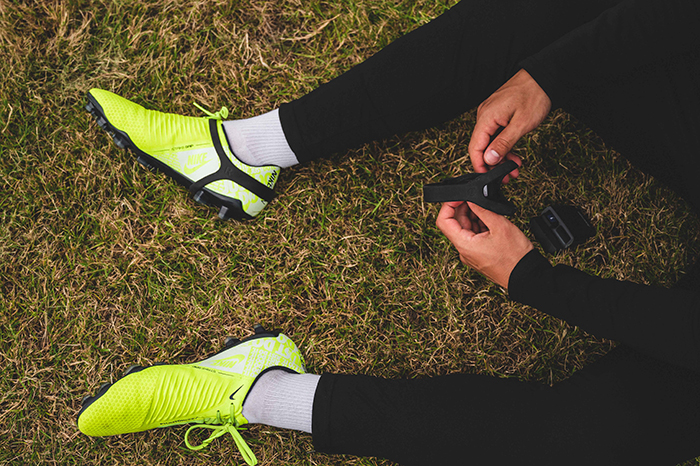 The kit consists of two motion sensors marked L and R which you insert into straps that fit over your boots. The sensors sit on the side of your heels so don’t interfere with any ball touches, and it’s so lightweight that you don’t notice it when running.

I covered 7.9km over the 90 minutes, an average of 865 metres covered per 10 minutes, which the app informs me is significantly more than the UNO community average of 793km for a centre-forward but unsurprisingly not even close to the benchmark for elite players.

It was also slightly less than the 8.04km I covered back in September 2018, but let’s see how much running Roberto Firmino’s doing when he’s nearly 36. Nobody can stop the sands of time, mate. And as I like to tell my team-mates, I’m just conserving energy for all those high-intensity sprints I do.

There were 21 of those, according to the app, and I reached a top speed of 24.3kph. That’s slightly down on the average of 24.9kph, but 56 accelerations and decelerations over the 90 minutes is above average.

Indeed, I plan on using all this data in negotiations to have my £7-a-week subs waived. Above-average distance covered? They should be paying me. 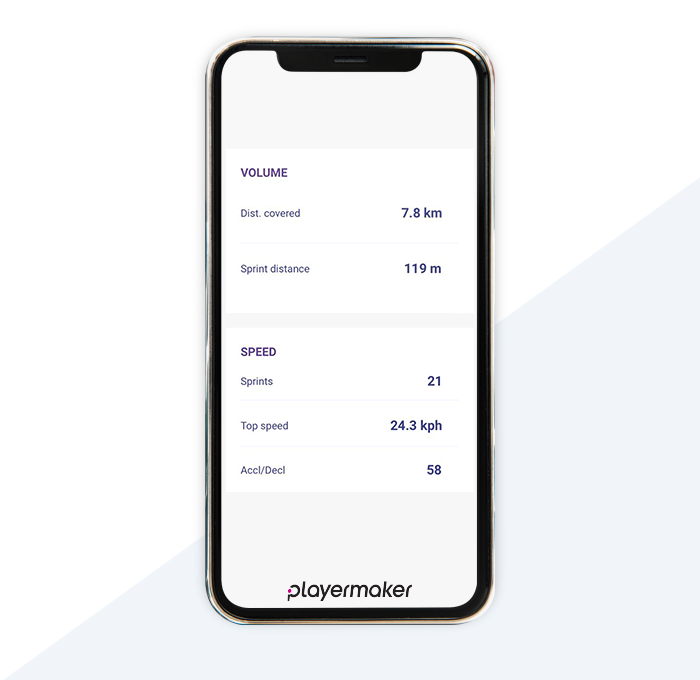 Like most amateur footballers, I have convinced myself many, many times that I’m technically good enough to play in the Premier League. If only I was fit enough, I could do what Olivier Giroud does, no problem.

Joking (slightly) apart, I’ve always thought of myself as very sound technically. I’m decent receiving the ball with my back to goal, I’ve got a turn in me, I can finish, and I create a lot of chances dropping back to No.10 and playing our wide forwards in behind.

Indeed, I did that several times in the first half of this game, setting up two or three chances for team-mates before my Invisibility Cloak took effect at half-time. I also had a goal narrowly ruled out for offside. Nice finish, too. 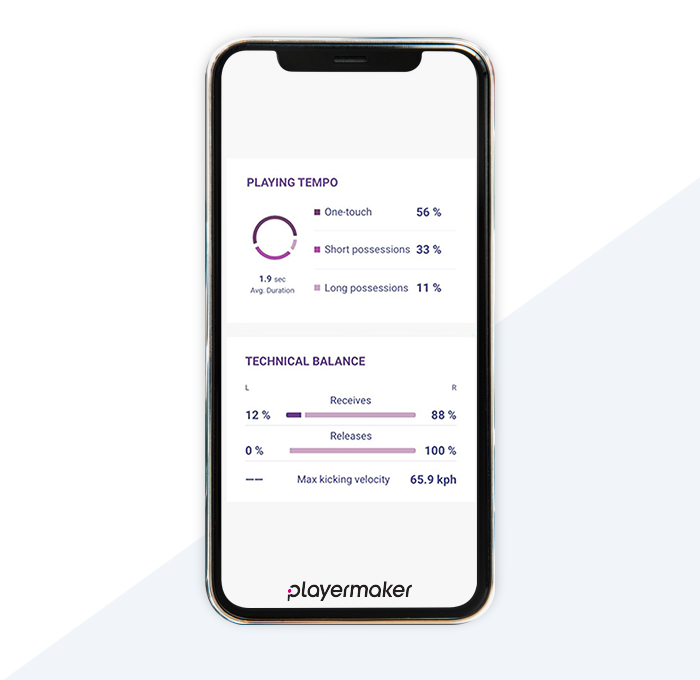 This is genuinely incredible data for someone playing in the Manchester Saturday Morning Football League to be able to see. And I’m pretty chuffed with it too: get the ball into me and I’ll look after it for you. I even had a higher percentage of one-touch possessions than the elite player average. They’re clearly not playing enough Rondo.

But I’ve saved the best worst piece of data until last. We know how much I ran, how quickly I did it and how I used the ball when I got it, but how many times did I actually touch it?

Eighteen. One-eight. Eighteen FFS! OK, so the tracker can’t count headers, but 18 is still utterly ridiculous. I knew I hadn’t been involved much in the second half, but never in a million years would I have guessed I’d touched it that little.

It’s not unusual as a centre-forward to make runs that aren’t used, but 18 ball possessions has sent me into a period of deep reflection. The UNO hasn’t just provided me with insights into my performance, it’s got me questioning my life choices. Should I just go for shuttle runs on a Saturday morning instead? 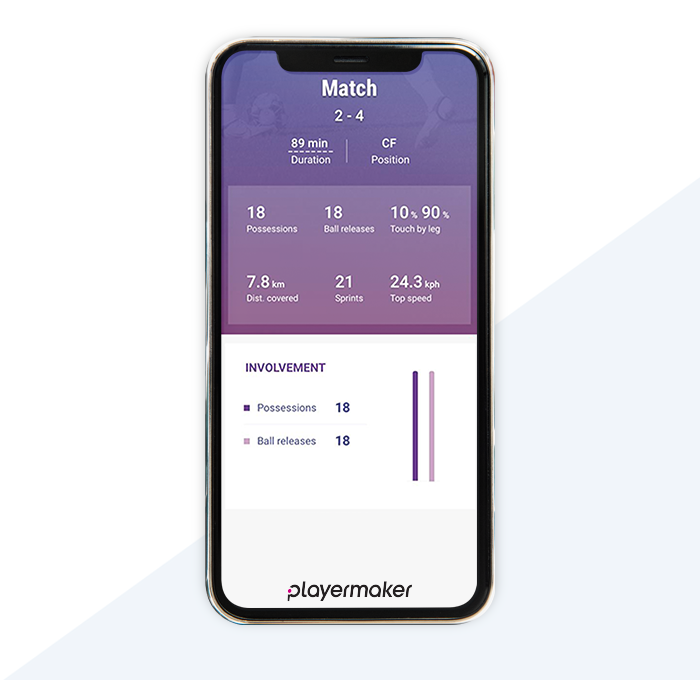 Suffice to say, I shared this data with my team-mates along with some of my thoughts. Hit the big man, lads!

Even if it doesn’t inspire them to pass it to me more, the UNO has certainly inspired me. Because like every other human, I’m obsessed with self-improvement. I want more touches, more sprints, more distance covered. Maybe even the odd left-foot pass.

And that is perhaps the UNO’s greatest asset. It’s a lot of fun for an amateur player like me, but for an academy player looking for that advantage over everyone else chasing a pro contract, these insights could make an enormous difference.

As for me, we’ll see what improvements the UNO can inspire me to make in the coming weeks. Olivier Giroud, watch out.

You can purchase the Playermaker UNO kit for £189 using Planet Football’s exclusive discount code, UNOPS (discount will be automatically applied at checkout when you click here) 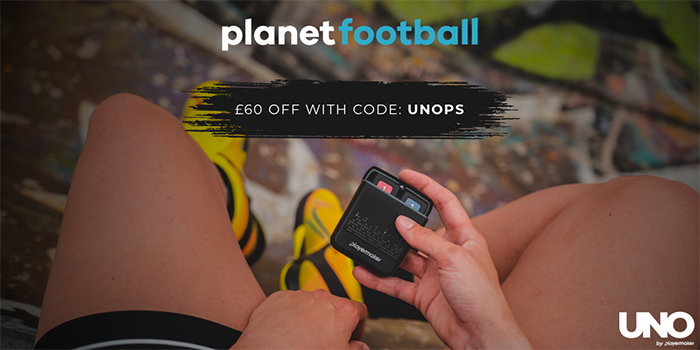