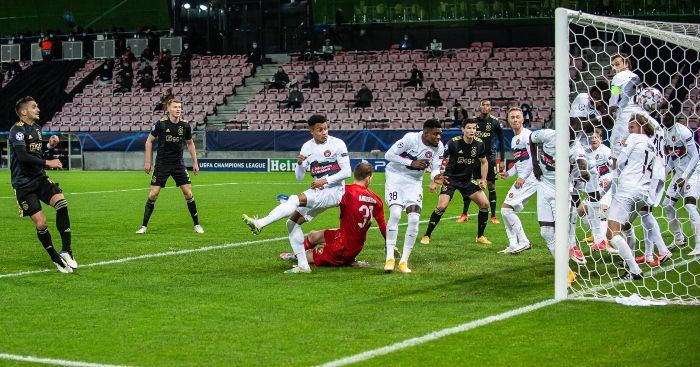 There’s something intrinsically pleasing about a defensive wall.

Lining up human bodies, in front of a football about to be violently struck, in the hope some human flesh stops its path – the crudeness of this method is an evergreen reminder of our caveman roots.

However, the real delight for football fans is that increasingly rare beast: the indirect free-kick.

You can picture the scene now. An absent-minded goalkeeper, perhaps concentrating so hard on the game or wondering if he’s left the oven on at home, picks up a stray backpass. Cue the shrill blast of the referee’s whistle and the sound of thousands of supporters rubbing their hands in anticipation.

The guilty custodian screeches at his team-mates to get back, which they do with all the enthusiasm of Mark Corrigan’s participation at Rainbow Rhythms. They assemble themselves uneasily in front of the ball, which will soon be fired extremely hard in their direction.

Some will flinch and a brave few will stand firm, while the majority will rush towards the opposition taker in the hopeless manner of Tommies attacking the German positions at Passchendaele.

Dusan Tadic provided a timely reminder of the joys of the indirect free-kick during Ajax’s Champions League match against Midtjylland.

All the classic components of the genre were present. Do the defending team have all 11 players strung along the goalline? Has the defensive wall tried to charge down the shot a good 10 seconds too early? Is the speed of the shot faster than a teenage boy slamming his laptop shut when he hears his mum come up the stairs? Check, check and check.

Everyone loves an indirect free-kick in the penalty box…

Dusan Tadic with the dead-ball strike for Ajax 💥 pic.twitter.com/I2ikU6lG5a

Alas, indirect free-kicks are not as common as they used to be. Goalkeepers, having furiously studied for over two decades, are finally comfortable clearing back-passes in an infuriating nonchalant manner. When did they become so boring?

This is a shame when you consider the propensity for narcissistically long set-piece run-ups these days. By the time Bruno Fernandes would land from his playground hop-skip-and-jump routine, he’d be stampeded by a thickset herd of Burnley players moshing their way off down the touchline.

Of course, all indirect free-kicks are destined to be rated on the Shearer scale. Playing for Glen Hoddle’s England in a 1998 World Cup qualifier, Alan Shearer produced a thunderbolt against Georgia which included that crucial, seductive kiss of the crossbar.

Yes, looking back you can question the haphazard defending. Alternatively, the decision of the Georgia captain to slide towards Shearer meant he avoided his brains being blown all over the Wembley pitch – so it’s swings and roundabouts.

You sense that Shearer welcomed the chance to strike the ball with all his power towards his fellow man, especially after he repeated the trick for Newcastle against West Brom in 2002.

After recovering from the jarring sound of Guy Mowbray commentating on ITV, notice how the Albion defence sprung forward like a broken jack-in-the-box, only for Shearer to simply cannonball the strike underneath them. Wor Alan was a true master of his craft

You wonder why the defenders don’t just stand still and take their punishment, imagining themselves chained in medieval stocks.

Thoughts travel back towards the school playground, where games of headers and volleys would end with you bent over backwards while your mates fired shots at your arse.

Even though you were safe in the knowledge most of them would miss, the fear itself was punishment enough.

This unorthodox method would surely have fared better than Aston Villa’s attempts to thwart Cristiano Ronaldo for Manchester United in 2009. Neither one thing nor another, Ashley Young and James Milner hesitantly shuffled forward, while the assembled wall stood perfectly in the wrong place.

While an exciting and rare occurrence, the indirect free-kick is no novelty act.

In 2001, Schalke trailed Bayern Munich by three points at the top of the Bundesliga going into their final round of matches.

In the final minute, with Schalke having already won their game, Bayern fell behind to a late Hamburg strike that sparked scenes of joy across Germany. The television commentator declared Schalke champions for the first time since 1958.

After numerous delays, Steffan Effenburg nudged the ball to Swedish defender Patrik Andersson, who bludgeoned a dramatic equaliser to give Bayern the title.

It was Andersson’s only goal for the Bayern – you can’t get more direct than that.