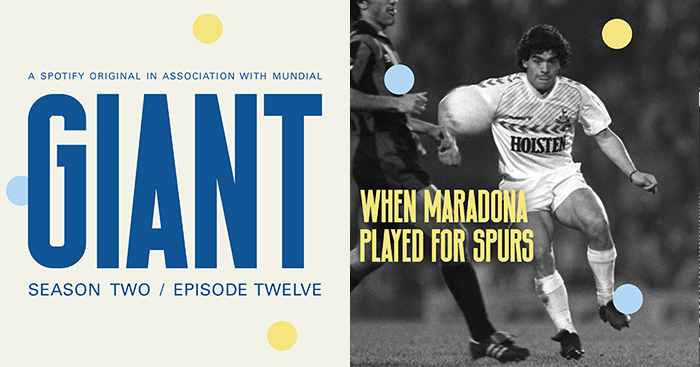 For many of us, our teenage years are a rite of passage. Unburdened by responsibilities and fuelled by the energy of youth, it is during this period we collect life-defining experiences like Panini stickers.

Our first loves, our first tastes of independence, our first period living anywhere but the family home. It’s during this period that our personal horizons begin to broaden.

For Adam Powley, one spring evening in 1986 illustrated this idea perfectly. The author and Tottenham fan was just 19 years old when rumours began to sweep the pubs of north London that Diego Maradona would be appearing in Ossie Ardiles’ testimonial.

“When it was announced it was then suddenly that the anticipation really ramped up,” says Powley, appearing on episode 12 of series two of MUNDIAL’s award-winning Spotify Originals podcast, GIANT.

“There already was really keen interest in the game beforehand. Well, Diego Maradona now turning up to play for Spurs I thought, ‘Got to be there for this one.'”

The attendance already promised to be huge. Spurs only averaged around 20,000 for league matches during this era, but the night already offered a final opportunity to say goodbye to Ardiles.

Having arrived in England alongside Ricky Villa after winning World Cup with Argentina in 1978, Ardiles became a legend at White Hart Lane. The midfielder provided Latin flair to a meat-and-potatoes domestic league, and his impact was immortalised in the song Chas & Dave dedicated to him.

These affections even endured throughout the Falklands conflict between the two countries.

“At the same time, in the 1982 FA Cup semi-final at Villa Park, there was an undercurrent of hostility towards them and generally the reception of Spurs fans was that, ‘These two are one of us, they’re part of the team and we’re gonna look after them,’” Powley says.

“As an image of that, there was a banner that was unfurled at Villa Park that said, ‘You keep the Falklands, we’ll keep Ossie.’” 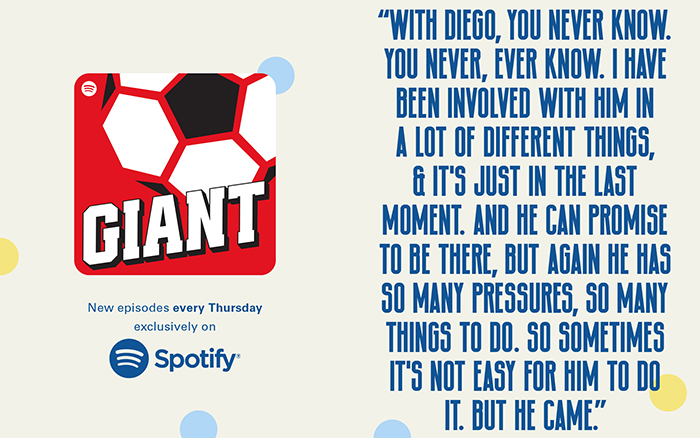 The prospect of seeing the world’s greatest footballer lining up alongside a departing club icon meant the streets surrounding White Hart Lane were packed.

“When we got towards the ground, the traffic started to build up so you got that sense of how big the crowd was going to be for that given game,” says Powley.

“There was kind of like a hum that you could hear, which steadily grew louder and louder until you got to the ground. Trying to get inside the ground itself was when it really hit home.

“We stood on The Shelf in those days, but we went around to the back of the East Stand and saw the queues – huge queues to get in, chock-a-block. Eventually, we did get into the ground and managed to find our way onto The Shelf and it was absolutely rammed.

The magnitude of seeing Maradona play in England during this period should not be understated. The match took place just under a year since English clubs were banned from European competition after the Heysel Disaster. Stadiums were ramshackle and fans perceived to be out of control.

This was a season in which English football was not even seen on television until January due to a dispute with the relevant broadcasters. Only 13 games in total were shown live during the 1985-86 campaign.

With the Thatcher government firmly in power and unemployment reaching a post-war peak, this was a world far removed from the glamour and cosmopolitan nature of the Premier League.

Consequently, witnessing prime Maradona in action was the definition of a rare treat. Every one of his movements was met with incredulous nudges from White Hart Lane’s packed stands.

“His touch and control were so obvious. I think there was one part where a throw-in came in and, for him, it was around shoulder height, but he managed to bring it down on his instep. it was instant control.”

Only one of Maradona’s temporary team-mates was even remotely on the same planet in terms of talent. Glenn Hoddle was at the apex of his career; 28-years-old, in the England squad for that summer’s World Cup in Mexico and adored by Spurs supporters.

On this spring evening, his dove-tailing with Maradona was the stuff of fantasy.

“They just clicked,” Powley says. “They just absolutely clicked, and it was dummies, it was feints, it was one-twos, it was shimmies. It just worked so well with the pair of them.

“The two of them matched each other for skill. It was like a rap battle, to use a 90s expression, where one of them did something and the other one was just forced by honour to top it.

“Some of his actual touches were sublime, and as the game progressed it was obvious that him and Hoddle were just a cut above.”

Spurs won the game 2-1, following which Powley and his fellow supporters melted away down the Tottenham High Road. There was still light in the sky and the warm mid-spring weather added to the other-worldly sensation of what the crowd has just witnessed.

“It’s kind of one of those old war stories, pub stories that you can bore younger people with. ‘I was there the day I saw Diego Maradona wearing the Spurs shirt.’ And it was just a privilege.

“It could be a piece of music, it could be some experience of travelling somewhere – that game is one of those.

“When I think of Ossie Ardiles’ testimonial, 1986, the day Diego Maradona played at White Hart Lane, it evokes so many memories about time, place, people, friendships, atmosphere – all those kinds of things.

“So for anyone who was there it was part of our lives, and the memory of it was one to cherish.”

Listen now to When Maradona Played For Spurs to hear more from Adam Powley, plus the brilliant stories of Maradona and Ardiles’ experiences with the Argentina national team and how Diego left Martin Tyler in awe. Don’t worry, we won’t judge you for the YouTube rabbit hole you’re going to find yourself down afterwards.