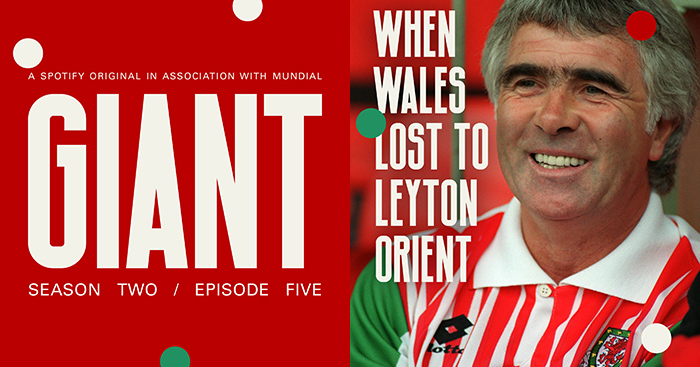 Watching a shit team is a rite of passage for any football fan. It builds camaraderie, brings out the gallows humour, and, eventually, eventually, you end up remembering it all kind of fondly. But have you ever had to watch a team as bad as Wales under Bobby Gould? Elis James has.

The fifth episode of the second series of GIANT, the MUNDIAL-produced Spotify Originals series of audio documentaries, sees Owen Blackhurst hand over hosting giants for James to relive the worst – yet also in a weird way, the best – moments from Gould’s four years managing the Welsh national team from 1995 to 1999.

Also featuring Ryan Giggs, now-manager and then-player under Gould, and Nicky Wire from the Manic Street Preachers, James sums up the experience neatly in his opening monologue: “We were shit.

“Not like when Brazil were shit, losing 7-1 to Germany in the semi-final of the World Cup. Not even like when England were shit because they missed out on USA 94. I mean, watch-the-telly-through-your-fingers shit.”

And if there’s one thing we love even more about reminiscing about the times our own teams were completely shit, it’s listening to other football fans talk about their team being even more of a shambles.

Including tales of Gould, a 50-year-old Englishman, subbing himself on up front in a friendly; fighting John Hartson in training; asking players to put their choice for captain in a sealed envelope but then choosing Vinnie Jones anyway; the whole episode is wonderfully entertaining and somehow cathartic.

But the real lowlight of those wonderfully-shit four years under Gould came when he arranged a friendly against Leyton Orient in August 1996 to warm up for a World Cup qualifier against San Marino. It’s a game Wire brilliantly describes as “the apex, the Crucible of Catastrophe”.

Orient had finished as the fourth worst team in the entire Football League in 1995-96; Wales had Ryan Giggs, Mark Hughes, Dean Saunders and more. Yet, somehow, Wales lost 2-1.

The likes of Ryan Giggs, Mark Hughes, Robbie Savage and more lined up for the Dragons – but The O's edged it late on!

One of James’ mates who was at the game remembers standing with some Orient friends who were soon sniggering between themselves and before long openly laughing, in pity: “It was quite a bizarre day. It started badly and got steadily worse.”

Giggs, unsurprisingly, doesn’t have such vivid memories of the day.

“We got beat, didn’t we? But we won against San Marino,” he laughs.

“That one’s a bit of a blur, I don’t know if I’ve tried to delete it out of my memory. I remember playing at Brisbane Road, playing against Leyton Orient, supposed to be a more intense kind of training session, 11v11.

“In them days, we’d often have the kit man at right-back, the physio at centre-half, to try and make up an 11v11. So maybe it was to get a proper 11v11 in a match situation.

“It would be big news now, but I don’t remember it being huge news – it was just what we did round about then. It was different, but it was normal if you know what I mean?

“Now it seems crazy – at the time it was like, ‘really?’, but not refusing to play or participate. It was just a case of ‘right, okay, this is how we’re preparing, just get on with it’.”

The Bobby Gould years at Wales.

Fights. Fry ups. Friendlies where he brought himself on up top.

And, a game against Leyton Orient who'd just finished near the bottom of the Fourth Division.

Giggs goes on to confirm the breathtaking details of Gould’s time in charge. Not all those notorious tales can be true, surely?

Most of them are. Fry-ups just before training – true. Training at prisons and schools, getting mobbed by hundreds of kids – true. A fight between Gould and Hartson while the rest of the team gathered round in a circle – true.

“Obviously I was coming from the environment at Manchester United where it was very professional,” the now-Wales manager says.

“What I go by now, as a coach, is not giving the players any excuses not to perform.

Just how shambolic were things behind the scenes at Wales back then? You wouldn’t believe it if we told you, so let MUNDIAL do it instead. Listen now to ‘When Wales Lost to Leyton Orient’, 23 minutes of piss-yourself-laughing, jaw-dropping gold.