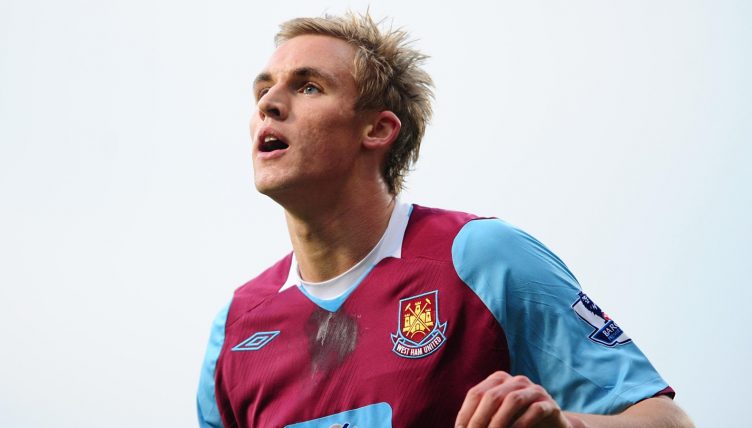 In May 2009, after making a successful return from two months out with a knee injury, Jack Collison won West Ham’s Young Player of the Year award.

Collison had suffered a knee injury in a game against Wigan Athletic, but aged just 20, few would have thought too much about it when he returned to feature in what was his breakthrough season.

In reality, it was the beginning of the end of his career and the injury which ultimately forced him into retirement seven years later, still only 27.

“It was quite innocuous really,” says Collison. “It was a long ball from Robert Green. I’ve tried to control it on my chest and as I’ve gone to run off, with no one around me, I fell awkwardly on my knee.

“My foot got caught in the ground and my body weight went one way and my kneecap went the other. It popped out and did a lot of damage. From then on, I was never fully fit again.

“I knew it was a bad one at the time. I’d never felt pain like it in my life, even with all the oxygen I was given. 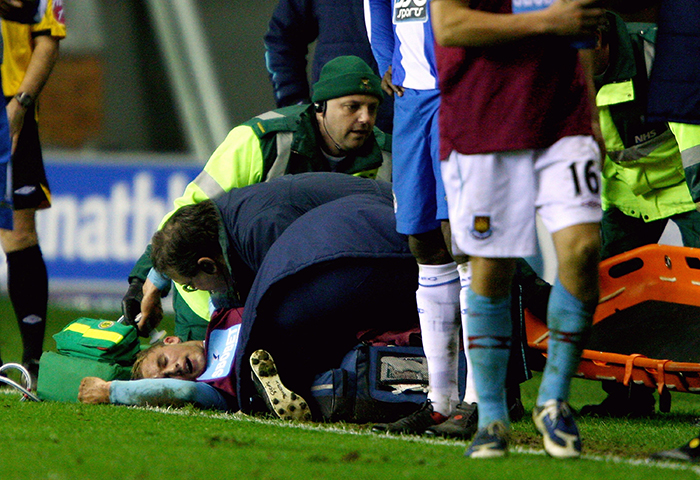 “After reviewing it I had the option of long-term surgery or to try and strengthen it to see if I could get back playing that way. As a young player, having just broken into the first team and started playing international football, I wanted to get back as soon as possible.

“We tried the route of strengthening the muscles, but within 25 to 30 games it got to the point where I’d play on Saturday, my knee would swell up, and I probably wouldn’t train again until the Friday.

“It was a very difficult time and it obviously affected my performances and affected my knee long term.”

Going under the knife

Collison belatedly opted for surgery in May 2010, over a year after the initial injury, but it put him out of action for 14 months.

When he made his return at the end of the 2010-11 season, with West Ham United struggling towards the bottom of the Premier League, his first start for over a year coincidentally came back at the DW Stadium and ended in a 3-2 defeat that condemned the Hammers to relegation.

He was at least playing again and the midfielder would be a key part of the club’s subsequent promotion under Sam Allardyce, but never with the same freedom that he had before.

The injury always had to be managed to avoid it flaring up too badly, which meant missing training sessions and often midweek games.

“I knew I was struggling to get back to the pre-Wigan form, but it was just such a joy to be back out there and play some part,” says Collison.

“It was difficult in terms of managing the knee. I still struggled to play if we had a game on the Tuesday night. Quite often I’d be rested or not in the squad at all, which was quite difficult to deal with, especially in terms of trying to nail down a starting spot.”

Scandinavian Hammers wish you all the best on your big day 🎉⚒️ pic.twitter.com/jdxb2asdph

After his most enjoyable season in a West Ham shirt, playing 35 games and scoring six goals as the club were promoted via the play-offs, Collison suffered another setback. It couldn’t have come at a worse time.

“In the pre-season after we got up, once again I had knee issues,” he says. “Missing that pre-season was a big thing and I never really managed to get back in the team.

“I had a short loan spell at Bournemouth, which I loved. I played four games in a month under Eddie Howe, and then towards the end of the season I went on loan to Wigan.

“They got so close to promotion, and to an FA Cup semi-final, which was fantastic. But at the same time I was really struggling with my knee.

“I was struggling to find form and even be able to train. I was pretty much living my life on an ice machine outside of football, just to manage the swelling.”

In the summer of 2014, Collison was released by West Ham. He’d arrived at the club as a 17-year-old after Cambridge United had closed down their youth system and went on to make 121 appearances for the first team, as well as 15 for Wales, but regret over what could have been lingers.

“There were definitely periods when I was out injured that I found it tough to watch the Premier League and international games.

“Obviously seeing Wales doing so well at the Euros was tricky too. I came through at the same time as Aaron Ramsey and Joe Allen, who’ve gone on to do so well.”

Collison didn’t retire immediately after leaving West Ham, joining Ipswich Town on a short-term deal, but continuing knee problems meant he was unable to make a single appearance for the club.

A more prolonged spell away from football was needed. Collison’s focus shifted elsewhere and he began to explore other opportunities during almost a year out of the professional game.

He started a soccer school and a degree in sports writing and broadcasting which kept him busy, but, deep down, he wanted to give it one last go.

“There was always a worry that I wouldn’t get back to doing what I love,” he says. “I knew I wanted to stay in and around the game so I started looking at the coaching more seriously.

“It was nice to have my soccer school to occupy my mind. To see it become successful gave me a lot of joy and took my mind away from focusing on my knee the entire time.

“I’d worked day in and day out again. I’d devoted my life to it. I knew I could look at myself in the mirror and know that I’d tried absolutely everything, but unfortunately it wasn’t going to work out. My body just couldn’t do it anymore.”

Collison announced his retirement on February 13, 2016. The strain that seemingly endless cycles of injury, recovery and rehabilitation had put on him and his family was too physically and mentally draining.

“After the big operation I was spending 8-10 hours a day on a CPM (continuous passive motion) machine,” he says.

“Towards the end, I would train and then be on an ice machine the entire night. I wouldn’t really be able to go out shopping or walking around too much because my knee would ache.

“Some mornings I would wake up in agony. I wouldn’t even be able to walk properly. For my family to see me putting myself through so much pain – with all the hours and the effort I was putting in at work and behind the scenes – it was certainly starting to take its toll.”

Stepping away from football at such a young age proved a massive wrench for Collison, but was ultimately the right decision.

He has been able to make considerable progress as a coach, completing his badges while at Peterborough, and in 2017 he returned to West Ham, spending a couple of years working within the youth ranks before moving to America to join the coaching staff at Atlanta United.

“I knew that I still wanted to work in football. I missed being in that environment and being out on the grass every day. In coaching I found something that inspires me and allows me to do that.

“My sanctuary is still out on the grass, but instead of being involved in the sessions, it’s taking them. I still try to join in but I’ve got the young ’uns running rings around me now.

“My goal now is to be the best coach I can be. To be back at West Ham, where it all began, is great. I want to pass on my knowledge and try to get the next young player into the first team.

“Having to retire so early was disappointing, but it means I’m further along on my coaching journey. I’ve already completed my A Licence and I’m currently on my Pro Licence.”

He has plenty of lessons to impart from his own experience, too.

“In that short period of time where I was a footballer I went through so much in terms of injuries.

“I went from being the next up-and-coming thing to not even being involved in the squad and having to deal with loan moves. I feel like I’m in a good position to pass on some of this knowledge and try to help the next generation.

“I say to the boys that it was only 10-12 years ago that I was sat exactly where they are. The real passion now is trying to find that next one and get them into the first team.”

READ MORE: Why the shady Carlos Tevez & Javier Mascherano deals should be celebrated