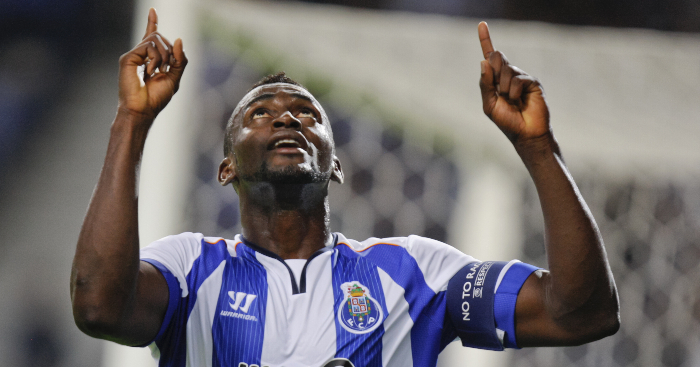 When Porto faced Bayern Munich in their 2015 Champions League quarter-final, there were doubts over whether Jackson Martinez would make the first leg due to injury.

Pep Guardiola was made to rue Martinez’s recovery, as the Colombian absolutely tore his Bayern team apart that night.

The striker took less than three minutes to win a penalty, dispossessing Xabi Alonso before fooling Manuel Neuer into taking him out.

Then, after Jerome Boateng had completely misjudged a long ball forward, Martinez rounded Neuer before stabbing the ball into the back of the net to make the score 3-1 on the night.

Ultimately, Martinez’s goals against Bayern – he also scored in the second leg – weren’t enough for Porto to reach the semi-final, as Bayern ran out 7-4 winners on aggregate.

But it did confirm Martinez’s place among the most exciting and sought-after strikers in the whole of Europe.

While Arsenal fans were debating the his age on Twitter, Atletico Madrid weren’t messing about, swooping in to sign the frontman for €35million in the summer of 2015, just a few months after his display against Bayern.

With Jackson Martinez in the headlines, throwback to when #Arsenal fans couldn’t work out if he was 28 or 29… pic.twitter.com/MqIRi8re4B

With Mario Mandzukic having left the club to join Juventus, Diego Simeone was hoping that Martinez could fill the void left by the Croatian.

Things went far from as planned, however, and five years later, at 34 years old, the former Porto striker is now without a club and pursuing a career in Christian rap. Yes, you read that correctly.

The fairly rapid nature of this switch seems almost unfathomable, with Martinez unable to settle at any club since he left the Estadio do Dragao.

Perhaps he was set up to fail at Atleti, competing for a place in Simeone’s side against Antoine Greizmann and Fernando Torres, two of the club’s biggest modern heroes.

Atleti midfielder Oliver Torres noted a more troubling change in his former Porto team-mate, who began to isolate himself from the rest of the squad. “We practically spoke with him once a week,” Torres told Marca in 2016. “Everyone tried to help him, but nobody knew what was going through his mind.”

As another unnamed team-mate put it in the same report:  “[Jackson] believed more in God than in himself. The pressure got to him; he never looked confident.”

The Colombian lasted just six months at the Calderon, making an underwhelming 13 starts and nine substitute appearances across all competitions.

An even more underwhelming two goals were scored during that time, albeit that did include a pretty impressive strike from range during a 3-0 victory over Sevilla.

When Martinez left Atletico Madrid, he took what was seen as a lucrative offer from Guangzhou Evergrande but once more struggled in a much-less competitive division.

The striker did get off to a great start, scoring four goals and assisting another in his first three Chinese Super League games, including a strike to help secure a 2-0 derby win against Guangzhou R&F.

But Martinez scored just one more goal for the club. Having picked up a troublesome ankle injury during his time with Atleti, nothing compared to what he endured in China.

After suffering from a couple of smaller injuries, Martinez then required two surgeries that kept him sidelined from October 2016 all the way through to September 2018.

Guangzhou Evergrande went on to win one CSL title, a Chinese Cup and two Chinese Super Cups during Martinez’s absence.

Martinez eventually made his comeback, albeit not before he had returned to Portugal in the hope of resurrecting his career, joining Portimonense on loan.

It was an unsurprisingly slow start from Martinez as he got back into the swing of things, but there were glimpses of what he used to be capable of.

Martinez’s best game came in a 3-1 win against Vitoria Setubal, assisting the opener before scoring a brace that included a sweet strike from outside the box.

Then there was a 5-1 victory over Nacional, where the Colombian produced a wonderful flick to set up Lucas Fernandes for Portimonense’s second of the game before the striker went on to complete the scoring himself.

However, by the end of August, Martinez was back out of the door having scored just one more goal – a well-taken strike that went in off the post during a 2-1 loss at Sporting Lisbon.

Long before making headlines at Porto, his Atletico Madrid anticlimax and the injury-tainted time that followed, Martinez had started his career with Colombian side Independiente Medellin. It was here where Martinez enjoyed his first taste of success, helping the club win their fifth league title in 2009.

Having endured such a torrid time since leaving Porto four years ago, perhaps Martinez need to go somewhere familiar, and he expressed a desire to return. Unfortunately, that has not possible as yet.

Independiente Medellin released a statement that read: “After the medical evaluations of the attacker, the player and his medical group expressed the possibility of carrying out for the rest of 2020 a conditioning that allows him to face next year in better conditions.

“In 2021 we will be in contact with the striker again to fulfil his desire to end his great sports career in the place where his history began.”

While there is still hope the striker will get his wish to return to the pitch in Medellin, his current focus is on making music there.

In an interview with Vamos, Martinez said: “At a critical moment in my career, when I had two surgeries, that caused me to be off the pitch for two years without competing and in that time I dedicated myself a little more to writing and made the decision to release an album.”

His first album was named No Temere, which translates to No Fear, while he has released six Christian rap songs on YouTube since the beginning of 2020. The latest of which is title Escucha – the English translation of which is Listen – which has over 65,000 views on YouTube.

Much of Martinez’s career will be characterised by disappointment and pain, but this is still a man who scored an incredible 92 goals in 136 Porto matches, has played 40 times for Colombia and was once one of the most wanted strikers in Europe.

The hope will be that he can return to Atanasio Girardot Stadium and turn out for Independiente Medellin again, but for now, Martinez is busy hitting notes rather than strikes at goal.