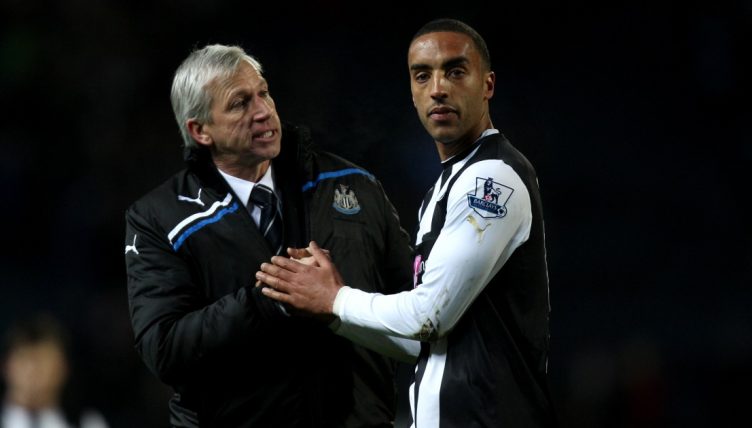 Sat in a hotel in Wigan in 2013 while waiting to complete a move to the Greater Manchester club, Perch’s phone began to ring. It was Pardew, then manager of Newcastle United, the club Perch was on the verge of leaving.

Feeling lied to and hung out to dry, the 27-year-old let it go to voicemail and still hasn’t returned the call, which was wishing him well for the future. The events leading up to his departure were one thing, but the bad blood became much more personal as time went on.

“I left in a bit of a storm,” Perch says. “It wasn’t nice because the two years before were when I enjoyed it most at Newcastle. I was promised things that never happened. It was sad, but I thought it was best to leave then.

“Alan Pardew said I’d get a new contract in January 2013, but by the time the window had closed he’d signed a couple of players like [Moussa] Sissoko and [Massadio] Haidara and said, ‘We’re not going to offer you one now.’

“He’d got my hopes up and then just pulled it off the table.”

But it was Pardew’s testimony against Perch’s close friend and team-mate, Jonas Gutierrez, during the Argentine’s successful court case on disability discrimination grounds after his release in 2015, having battled testicular cancer, which was the final straw.

“I saw Jonas for lunch in Nottingham and he showed me what Pardew had said about him. He was one of the most professional players I ever played with and I love him to bits. I thought it was a disgrace and I will never speak to Pardew again. I’ve got no time for him.

“It seemed like Jonas would do anything for Newcastle and anything for the manager. He played through injury and came back from injuries. All of it that I read, it was just wrong on so many levels.” 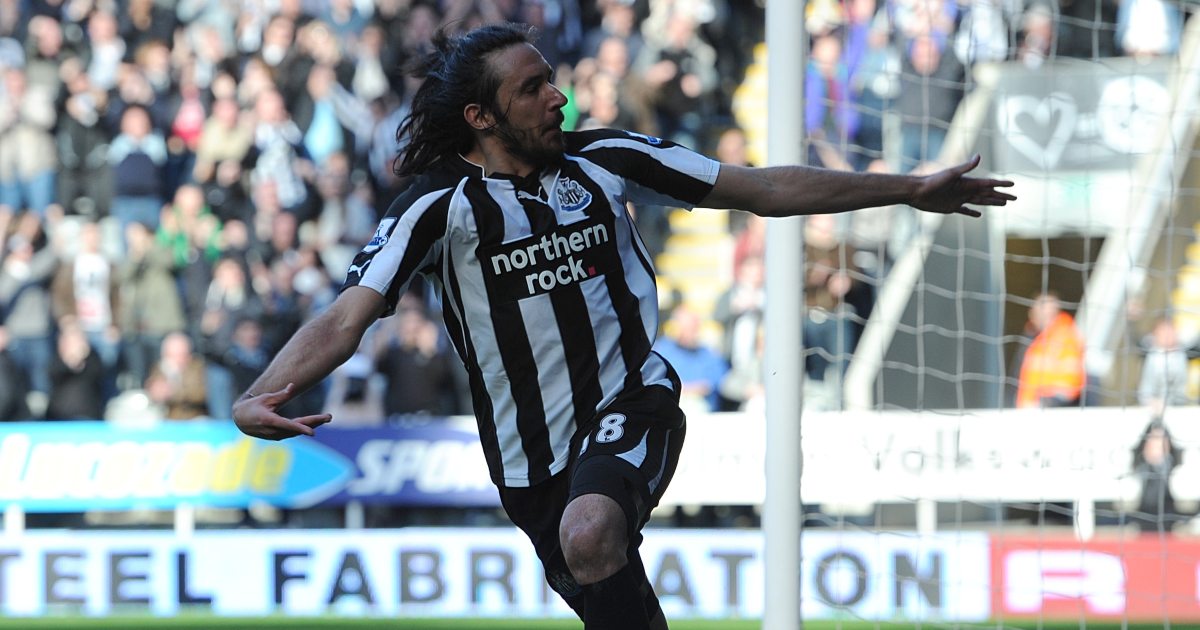 READ: Jonas Gutierrez: Joining Newcastle was the best decision of my life

Perch himself had shown versatility at Newcastle, whom he joined after they were promoted from the Championship in 2010 before Pardew replaced Chris Hughton as manager. His ability to play across the defence and in central midfield led to opportunities in the side after initially not making the cut for Newcastle’s pre-season tour of the United States ahead of his second campaign at the club.

Having performed brilliantly and helped the Magpies qualify for the Europa League in 2011-12, he soon earned his own song: ‘We’ve got Perchinho!’

“I was sent with the Under-23s to Amsterdam in pre-season while the first team went to America,” he says. “I kept my head down and worked hard; the lads still liked me and when Pardew needed me I turned up and started playing well.

“I was playing in a lot of different positions and I think the fans appreciated that I was putting 100% effort in. I’ve not come across too many sets of fans like that; at Forest, they wanted 10/10 every week, which is fair enough.

“We made some good signings; Hatem [Ben Arfa], Cabs [Yohan Cabaye] and Demba [Ba]. We had a good blend of foreign and British players and we just all gelled as a team. Nobody was bothered about what others were earning or pushing for moves, it was a team of good eggs.

“We didn’t expect too much and the results took care of themselves. Before you knew it, we were fifth. I don’t think Newcastle have come close to repeating that since.”

‘He had influence on team selection’

Perch blames Mike Ashley, Newcastle’s owner, for what happened next. Ever unpopular on Tyneside, fans are desperate to see him sell the club. His presence day-to-day was rare and often unhelpful.

“I met Mike Ashley three times. When I signed and when he came to the training ground a couple of times. I know he had influence on team selection. I’d be playing on the Friday, then on the morning of the game, Pardew would ring and say I wasn’t.

“I guess Ashley wanted his better assets to play, I wasn’t a £10-15million player like [Cheick] Tiote or Cabaye, I was just a lad from the Championship, even though I was playing better than them.

“Our biggest mistake was not pushing on the following year. We kind of just stood still, whereas you need to try to kick on.

“If you look at Leicester, they sold [Harry] Maguire and bought [Caglar] Soyuncu and [Wesley] Fofana. They’re now consistently challenging for Europe. Newcastle’s model is the wrong one; they think they can buy cheap and sell high and it doesn’t work like that.

“We’d had such a good season and we thought it was the time to spend some money because, at the time, Newcastle in the Europa League was massive, just the name was enough, people would come.

“But we didn’t do it and lost some key players like Demba. Big names are always going to leave when they see a club has no ambition.”

Newcastle finished 16th in 2012-13, narrowly avoiding relegation. There was a Europa League campaign that saw the Magpies reach the quarter-finals before defeat to Benfica, something Perch remembers as a career highlight and admits he took for granted.

“It was brilliant, I loved it. Those away trips were some of the best nights of my life, travelling on a nice plane. We used to play cards, me, Jonas, [Fabricio] Coloccini and Ryan Taylor. Then when we got to the hotel, me, Ryan and Dan Gosling would play FIFA.

“We played winner stays on and on one occasion I was against Tayls. I nicked the ball off him and scored and he either kicked the TV or punched it. The screen was shattered! So we had to get my TV in, and the next morning, because I’d taken mine out of my room, they thought I had broken it and I got charged €700 for a new one. Tayls sorted it out in the end, but he always used to get so angry.

“We didn’t have a big enough squad to cope with the extra games. We’d be travelling back on Friday, training Saturday morning and then there’d be a Premier League game on the Sunday. We didn’t have enough players to do it.

“The gaffer was juggling whether to focus on Europe or the Premier League and it was tough on him because he didn’t have the resources. It was a difficult balancing act and I don’t think we got to grips with it at all.”

There were a number of difficulties Newcastle faced in that campaign, particularly in January. Ba’s exit was chief among them. Having played so well out of position to accommodate his countryman Papiss Cisse’s arrival in early 2012, a buyout clause in his contract was triggered by Chelsea.

Coloccini made no secret of his desire to return to Argentina, which threatened to derail the season, while Perch admits that an influx of French players – Sissoko, Haidara, Mathieu Debuchy, Mapou Yanga-Mbiwa and Yoan Gouffran – distorted the harmony in the squad.

“It is fair to say the squad became cliquey. We had such a good blend before, but when more French players arrived, they would stick together and the English and Argentinian boys would stick together. It ruined it a little bit, but we’d signed a few good ones and made a profit. Maybe the French market was good for profit. That is what it felt like to us, anyway.

“Colo was young when he left Argentina, he’d been away from home for 15 years and he wanted to go home. When you’ve got family, your kids and your wife to think about, I can’t imagine how hard that would be for him. I’ve always been in England, but even when I was at Newcastle, I wanted to come back to Nottingham.

“When you get foreign players who’ve been so successful abroad, I can understand them wanting to go home. I was just a couple of hours away, Colo was 10 or 15 hours by plane.”

It was the £9million signing of Cisse from Freiburg that really transformed Newcastle’s initial push for Europe the year before. The Senegalese striker scored 13 goals in his first 14 starts, despite initially being unknown to his team-mates. Ba moved to the left of a front three alongside Ben Arfa and, having scored 15 times before Cisse signed, did so once more that season. On the pitch, it worked, but Ba was far from happy.

“Cisse was so unorthodox, but everything he hit in his first six months went in. I don’t know how he did it, he didn’t look like that in training, but on a matchday he’d just turn up… it was weird, because no way would I look at him and fancy him to do what he did from that January.

“I got the sense that Demba wasn’t happy when Papiss came in. He was scoring all the goals until then and got moved out wide. He was really good at it, but I could sense he didn’t like the fact that Papiss was grabbing the headlines. It didn’t affect anything in the dressing room, but he definitely let on that he didn’t like playing on the left.”

Two of Cisse’s goals came against Liverpool on a warm spring afternoon at St James’ Park. There was a feeling of rebirth in the air – with Jose Enrique and Andy Carroll making their first returns since leaving Newcastle, one era was ending and another was beginning. Perch was involved in a rather comical episode, a clash with Reds goalkeeper Pepe Reina that saw Reina sent off and Enrique go in goal.

“I was at centre-half with Willo [Mike Williamson] and I think people thought we wouldn’t do very well and big Andy would bully us. We just got on top of him and we played well. The Reina incident was at a time with no VAR, so any contact, you’d go down and try to get players sent off. I’m not the first person to do it.

“If I was to say I was embarrassed about one thing in my career, I wouldn’t do that again now. I got Reina sent off, Jose went in goal and we won 2-0 so it was a good thing. Colo and Jonas had to calm Reina down at full time because he was seething. He wanted to kill me!

“I think he’d played about 200 consecutive games for Liverpool at that point, so I ruined his little record as well. I got hate mail from Liverpool fans, but I laugh about it now.”

Now 35 and playing at Mansfield Town after spells with QPR and Scunthorpe United, Perch is honest and unnerved when remembering his time at Newcastle. It was his character that endeared him to the fans in the first place.

“I was frustrated with the manager and owner at the time and, keeping tabs on it since, things only seem to have got worse so I can see where fans are coming from. They’ll only grow more frustrated and I can understand. I saw how things worked first hand.”

This interview was originally published in June 2021.

TRY A QUIZ: Can you name every player to score 10+ PL goals for Newcastle?