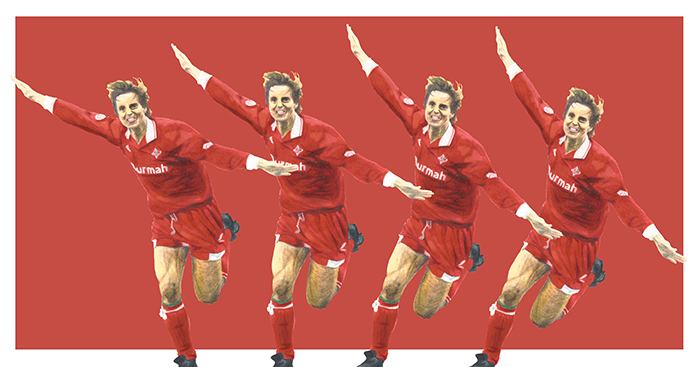 Rapid Vienna to Swindon Town is no ordinary move, and not many career dreams have been realised at the County Ground in the last 30 years. Yet in the summer of 1993, Jan Aage Fjortoft was pinching himself at the thought of playing alongside John Moncur, Martin Ling and Kevin Horlock.

Having moved to Austria from Lillestrom in his native Norway, Fjortoft was offered the chance to become Swindon’s record signing. More importantly, he was to play in a Premier League intent on establishing itself as the best league in the world.

He would stay for five years, playing for Middlesbrough, Barnsley and Swindon, as well as Sheffield United, where he spent a failed promotion campaign.

Fjortoft became one of the Premier League’s first foreign cult heroes, truly buying into English football culture and becoming a fan favourite at each of his clubs. He scored 87 goals in 219 games before leaving for Germany in 1998.

“I remember landing at Heathrow,” Fjortoft says, the excitement even of the memory forcing his words to quicken. “I got that feeling that this was the new step in my career, and what a step it was.

“Having supported and followed English football all my life, like every other Norwegian, it was a dream to play in England. We had grown up with Match of the Day every Saturday night.” 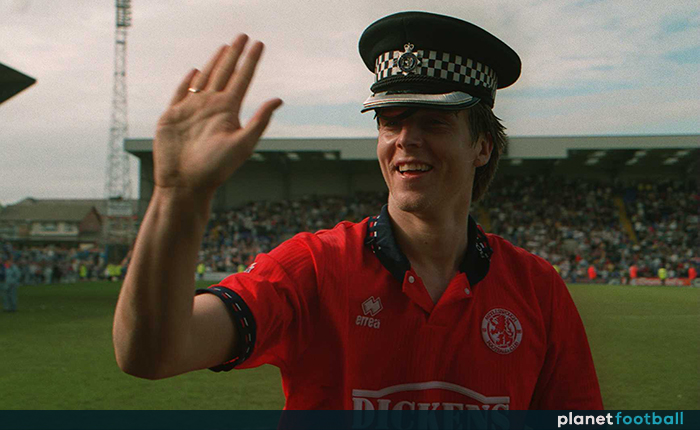 Fjortoft was among a number of foreign trailblazers in the early era of the Premier League. There were just 37 non-British and Irish players who appeared in 1992-93, with Fjortoft one of a number recruited before the second season got underway.

But the former striker is keen to point out that he never felt like an outsider coming in.

“At that time, Scandinavians were in fashion because we spoke the language and we were adjustable,” Fjortoft says.

“The good thing about English football, and I played at four different clubs, is that it is very easy to adjust. I think that I am the kind of person that can adapt easily.

“I played in four different countries and scored goals in every country, so it was easy for me. I wasn’t just a fan of English football but British people, travelling around in the UK.”

One of the first foreign players

Alongside Erik Thorstvedt, Gunnar Halle, Henning Berg and Stig Inge Bjornebye to name just a few, Norway was one of the more popular sources of foreign fancy. Erland Johnsen, one of Fjortoft’s best friends in the game, played at Chelsea.

Fjortoft fondly remembers the close bond between the members of English football’s Norwegian enclave: “When I was abroad I always looked to find friends in those nationalities, but I had friends from the national team so we looked after each other and supported each other.

“When I was at Swindon, I wasn’t far from my friend Erland Johnsen at Chelsea, and I knew Thorstvedt. Erik helped me a lot to understand things like tax returns and give me financial advice. You can help each other out.” 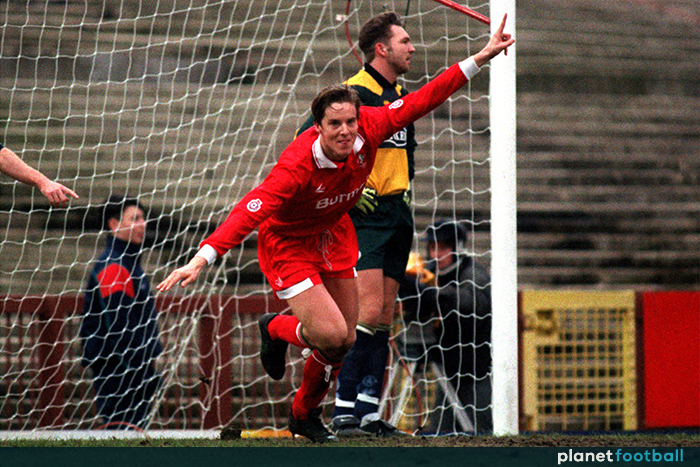 Fjortoft paints a sepia-tinted picture of Premier League life in the early 1990s, before English football truly opened its doors and put foreign players in the majority. Swindon Town and the community were welcoming, but there was far less structure in place to assist those who arrived from abroad.

However, if you think that made life a struggle for Fjortoft, think on. He was one of the few Premier League imports who never used the services of an agent, instead preferring to negotiate his own transfers.

Rather than allow the lack of rigid framework to unnerve him in a foreign country, he embraced it.

“I see now, 15 years later, that it was a very mature thing to do to solve problems myself,” he says. “Sometimes it can be hard, especially when you’re playing abroad and don’t have people around you.

“But you can’t just sit in a house and wait for people to solve your problems. You have to talk to people, approach people, adjust to people.”

When I suggest to Fjortoft that this feels like a thinly-veiled criticism of today’s mollycoddled superstars, he pulls away from the topic slightly.

Rather than being angry or resentful about a sport that wraps its assets in cotton wool, he worries instead about what that does for those players after their careers. The insinuation is that being able to walk through a career with your eyes closed only leads to you being blinded by the light.

“So many former footballers are in trouble,” he says. “It’s not a matter of money but being in the wrong mental state.

“I’m not the type to say everything was better in the past. There were good people then and bad people then, just as now.

“But I think it’s about the responsibility of leaders. If you have leaders in a club who don’t tell players how to develop outside of the club then I think it’s very short term thinking.

“I do pitchside interviews and I can sense the players who won’t have a problem after their careers, but I can also see players who are so protected that the moment their careers finish and they are unprotected, they will be struggling.

“It’s about clubs understanding that they aren’t just developing players, but developing human beings. We have a career that ends at 34 or 35, but then there are hopefully 50 more years in which you have to have a reason to wake up every morning. I think that has to be created while you play.” 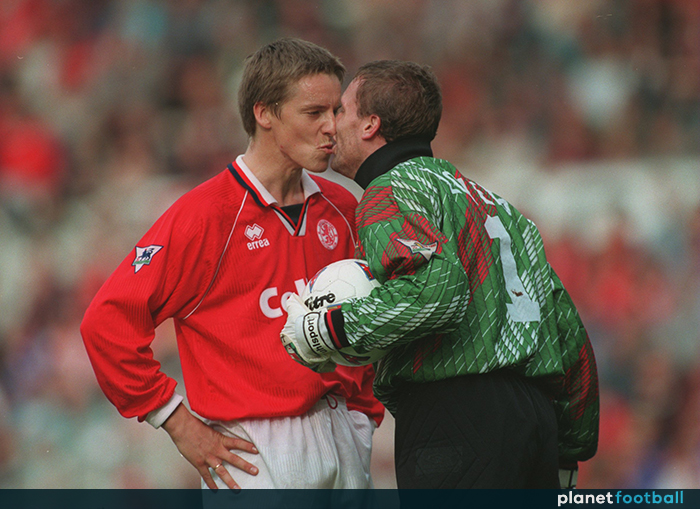 There are two distinct patterns to Fjortoft’s career in England. The first is that he played in cities where the football is truly at the heart of the community, arriving in the north after Swindon to play in what we can poetically describe as Proper Football Towns: Middlesbrough, Sheffield, Barnsley.

The second is that in the case of all but Sheffield United, Fjortoft played during the most exciting times in his club’s recent history. From brief glimpses of the Promised Land at Barnsley and Swindon Town to Middlesbrough’s league of nations under Bryan Robson, life was never dull.

“I was incredibly lucky to play for three clubs who probably had the most exciting times in their history while I was there,” Fjortoft smiles. “I was at Swindon when we were up, we scored so many goals and conceded 100 goals.

“I played for Middlesbrough when everything was fresh, playing the last game at Ayresome Park and the first game at the Riverside.

“At the time I arrived I was the most expensive player at £1.3million, but soon one of the cheapest. We had Juninho, Emerson, Ravanelli, Branco, Barmby. It was so exciting for North East football with Newcastle and Sunderland too.

“I also had 11 Premier League games with Barnsley, travelling with those fans singing that it was just like watching Brazil.

“Of course it would have been great to play for one of the biggest clubs in the country, but you have to be realistic. I was fortunate to play at such a great time for different clubs.” 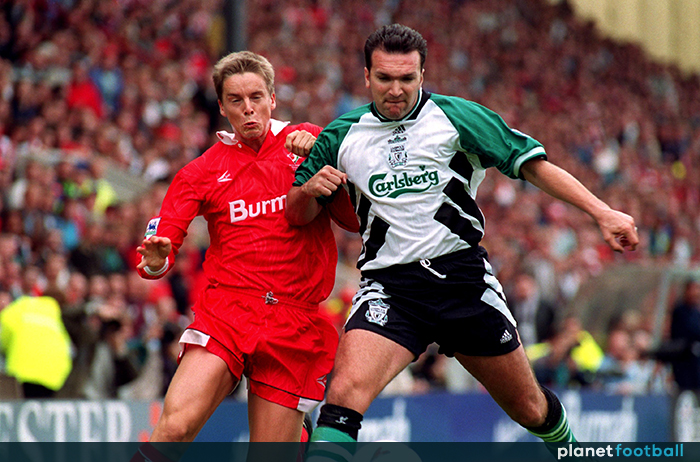 There is a tale from Fjortoft’s time at Swindon that I have to clear up, a possibly apocryphal story about him impersonating a journalist to find out information about his own transfer. As I mention the yarn to Fjortoft, it immediately becomes clear that this is no myth.

“It’s true,” he laughs. “At that time there was so much speculation, I’d been linked to every club I think and there were stories going around about my future.

“It was just as mobile phones were coming out, so I thought I would ring the chairman and pretend to be a Norwegian journalist after some information and ask about myself.

“It was worth doing too, he told me a lot! There was a lot I didn’t know about my situation that I found out on that call.”

Incredibly, Fjortoft made the call while he was on the back of the team bus while the chairman sat at the front.

Finally, there is no place to end other than on the celebration, which Fjortoft says is the one thing people still remember about his Premier League career.

Wherever in England he went the Norwegian scored goals; whenever he scored goals, the aeroplane followed. Arms outstretched and mouth stretched into a smile, he would wheel away to the delight of his support. Alongside Fabrizio Ravanelli’s shirt pulled over his head, it became iconic.

“There was a time when I was doing all silly celebrations,” Fjortoft explains. “But it took me ages to score at Swindon. So, when I finally did, I just did the aeroplane. 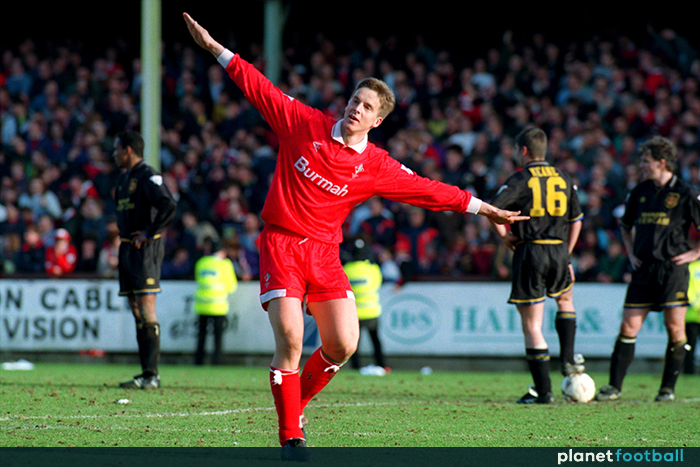 “That was the first half, and as I was walking off the pitch at half-time at the County Ground, I looked into the crowd. There was this old lady. She was shouting, screaming to me and doing the aeroplane celebration.

There is a sense of immense gratitude when Fjortoft speaks of his career, even nearly two decades after leaving England. Some ex-footballers can be bitter about missing out on the days of astronomic wages and being set up for life, but not here. Lucky is the word he uses more than any other.

“When I played at Anfield, even during the game, I looked around and thought ‘Wow, I’m a lucky man. I’m going to make the most of this. I came from a small village in Norway and I’m going to show them’.”

“One thing I always speak about is how sport can be used in communities, from a small charity project to a football club to participation in the local area. I think sport can change the world and open doors.

“That is one of the reasons I look back and think I had a great time at those English clubs because I could identify with them.”