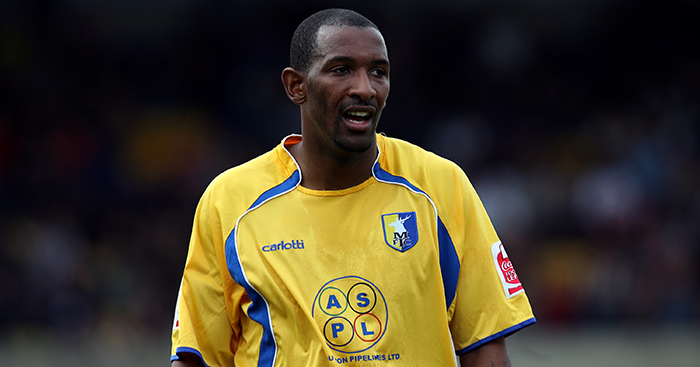 From Banbury United to Brackley Town, Lincoln City to Lowestoft, and Weymouth to Wrexham, it’s fair to say Jefferson Louis has been around the block. Now 40, he’s still going, playing for St Albans City in the National League South, the 39th different club of a remarkable career.

It’s seen him face his boyhood club Arsenal at Highbury, win an international cap for Dominica and become an iconic figure in lower league football, scored more than 200 goals in the process.

He was also once the subject of a bid from Aston Villa, has spent time in prison and teaches children who’ve been excluded from school. His story is quite something.

Louis admits to making some mistakes along the way, but he has no regrets about the winding route his life has taken. And throughout it all he has retained a deep connection to the game that still keeps him going ahead of his 41st birthday in February.

“It’s the passion and the love for it,” he says. “The changing room. The banter. Being around the boys and helping out the young players. If I can help push someone in my team to become a professional, that’s what I’ll do.

“I’m very competitive. I want to win and score goals. This season I haven’t really been hitting the back of the net too often, but I feel like I’ve adapted my game for the team. Before I used to play for myself in a sense. I just used to want to score, but now I have to adapt myself to help the team progress.”

Not bad for my first 90 minutes first start for my new club and two goals not bad for 40 👨🏿‍🦽⚽️⚽️😂@stalbanscityfc @scottdavies1988 pic.twitter.com/raPjvR6pLG

He’s matured as a person too, and Louis admits that, without football, life could have turned out quite differently.

“I’m not going to lie, growing up in London I was a bit of a rebel,” he says. “I didn’t hide how I felt. People used to misread me. When you’re young, people don’t really want you to be opinionated and speak your mind.

“Because I come from a big family, the way I was brought up was that if you want people to listen to you, you have to speak your mind. That’s what people didn’t understand with me. In my family, if you don’t speak up and tell people how you feel, then they’ll never know.”

This headstrong approach caused problems with a few clubs, cutting some opportunities short. “When I went on trial at Millwall at 14, they wanted me, but one of the coaches at the time said something to me and I didn’t like it. I challenged him and he obviously thought, ‘This boy’s no good.’”

Although the idea of being branded football’s ultimate journeyman would once have grated on Louis, he’s come to realise there’s much more to life than people’s perceptions of his nomadic playing career.

“I’m not really bothered anymore. Football isn’t my ultimate goal in life. I haven’t lost the interest – I still love football, but it doesn’t affect me how it used to. It’s not my main drive anymore.”

Indeed, alongside his football commitments, Louis has been working in a pupil referral unit for the past six years where children who aren’t able to attend an ordinary school are educated.

The initial realisation that he wanted to contribute something more came when his mother fell ill while he was playing for Darlington. It prompted him to move back down south and reassess.

“I thought to myself, ‘There’s more to life than football,’ Louis says. “With my upbringing in London, because I wasn’t a squeaky clean, good boy I got myself into a bit of trouble.

“I got chucked out of mainstream school when I was younger. I thought the best place for me to work was in the same kind of environment where I grew up as a kid.”

Louis registered with an agency and ended up working at the same pupil referral unit he’d attended as a teenager – Brent River College. He supports pupils aged between 11 and 14, helping to change their attitude and outlook.

“My main drive is to help kids reach their full potential,” he says. “I work in a school where kids have been chucked out of mainstream education and my main drive is to make them see what greatness they have inside themselves.

“It’s so rewarding. It feels so good when you change someone’s mindset. When I was younger I wish I had someone like that around. Sometimes a lot of the younger generation just want someone to listen to them and obviously I didn’t have that person.”

From prison to FA Cup hero

That might help explain why, in 2001, while playing for Thame United, Louis ended up in prison.

“There was an incident that happened where I got racially abused while I was watching an England game. This guy was really provoking me and when I saw him a month later I confronted him. One thing led to another and we ended up having a fight.

“There was a warrant out for my arrest because I beat him up, but I didn’t know the police were looking for me. I was driving in a car and the police tried to pull me over. I drove off down the road, jumped out the car and they arrested me. They did me for two charges, dangerous driving and GBH.”

Louis spent six months behind bars and used the experience as much-needed motivation. He was determined to make something of himself.

“I would never change anything that happened to me because prison was the thing that turned my life around,” he says. “It made me see what my true potential was.

“It was an eye-opener for me and it made me reflect on where I’d gone wrong in my life. A lot of people used to say to me that I had so much potential in football, but I didn’t believe it at the time. In prison I got myself in the best shape of my life and when I came out, I ended up fulfilling my dream.” 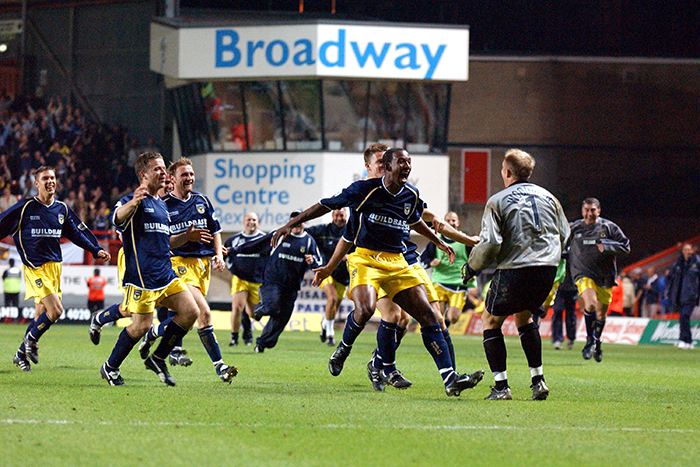 Significantly, Louis’ manager at Thame United, Andy Sinnott, stood by him while he was in prison. He credits Sinnott with giving him a sense of direction and the platform needed for his career to blossom. A move to Oxford United soon materialised, parachuting him to national attention with a run to the FA Cup third round.

Having grown up idolising Ian Wright, becoming an Arsenal supporter after being taken to his first match by his uncle, playing against them was surreal.

“The whole build-up to the game and the publicity I got with the press was fantastic,” Louis says. “When I got to the ground with my team, Arsene Wenger greeted me at the door. It was hard to believe. It was the best experience of my life.”

Although Oxford lost, the exposure led to interest from bigger clubs. Aston Villa put in a bid for Louis, but it was rejected. He never got an opportunity like that again.

“I look back at it and I think to myself, ‘Imagine if Oxford United agreed. I could have been playing in the Premiership.’

“But I don’t have any regrets. It’s just part of life. Your path is written before you realise. I don’t look back and think I should have done things differently. Everything happens for a reason and I’m happy with how my life is going at this present moment.”

Instead of progressing to the top flight, Louis embarked on a tour of the lower leagues. There were some tough spells spent drifting between clubs, and others where he was settled and playing well. The best came when he joined Wrexham in 2008 and was immediately made to feel like he belonged.

“Out of all the clubs I’ve been at, that was the club where I was loved the most. I felt like the fans loved me. I felt like everything I touched there turned to gold.

“That was because the manager, Brian Little, really believed in me. He made me feel like everything I did was right.” 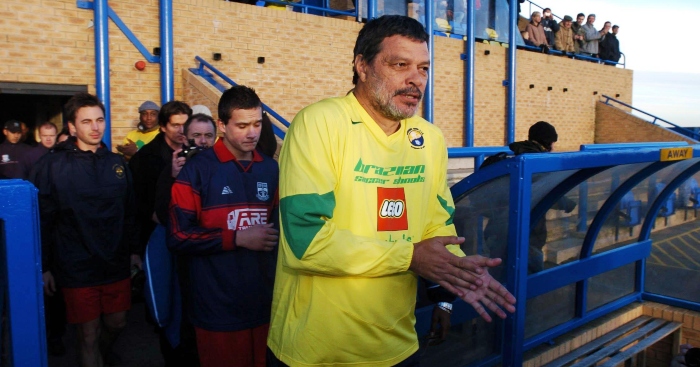 READ: Remembering when Brazil’s Socrates played for a non-league club in Leeds

That same year Louis made his first and only appearance for Dominica, the Caribbean island where his mother was born. Despite the disappointing result, a 1-0 loss to Barbados in a World Cup qualifier, it was a special occasion. He partnered his cousin Richard Pacquette, formerly of Queens Park Rangers, up front.

“We flew to Barbados and stayed there for a week. The whole match preparation, the atmosphere and the feeling was so good,” Louis says.

“But there was a scandal going on in the Caribbean with money and funding, to do with FIFA, so I was cautious of going to play for Dominica after that.”

Reflecting on the many managers he’s played for, as well as Little, Louis reserves praise for Justin Edinburgh, who he worked under at Rushden & Diamonds and Newport County, and Gary McCann. They first teamed up at Hendon, just as Louis was starting his new role.

“The way he is, the way he talks to you, and the way he made me feel – his man-management skills are second to none,” Louis says of McCann.

“I was going through that transition of working in a school, as well as playing football. He knew that I could play at a higher level, but he knew what I was going through and he supported me 100%. That’s what I really respect about him.”

Louis certainly doesn’t feel the same way about Steve Evans, who he clashed with at Crawley Town: “His management skills were just terrible.

“The way he dealt with things and the way he spoke to you as a player, it’s like he was the shoe and you were the dirt. You were always underneath him.”

During his two decades in the game, Louis has seen a lot. He admits that he’s made some rash decisions in the past, but managerial changes and short contracts, combined with the general flux and uncertainty of non-League football, have contributed to his incredible total of clubs.

A tall and powerful striker, pace was once his greatest asset. And as he’s inevitably slowed down over the years, he’s adapted his game accordingly and remains a handful for opponents. As a result, he’s never been short of offers.

“That’s how I look at football. Obviously in the early days of my career sometimes I didn’t have the right advice and the right people around me with decision-making. But later on in my career I’m just playing because I want to play. That’s the difference.”

Looking at his track record, many assume that Louis must be a troublemaker or difficult to manage. It’s a theory he’s heard in the past and is keen to refute. “They might think that, but when they really do their research they’ll find that I’m not. That’s one thing I’m not.

“You’re going to get people in your football career who don’t like you and people who do like you. It’s part and parcel of football. You see it at the highest levels and you see it at the lowest. When people do have an opinion of you, a lot of the time you just have to prove them wrong.”

At grounds across the country, throughout the football pyramid, Louis has looked to do just that. He hopes to move into coaching or management at some stage too but isn’t ready to stop tussling with defenders just yet.

“Players who play against me know I’ve had a few teams, but they know they’ve never had an easy day at the office with me,” he says defiantly.