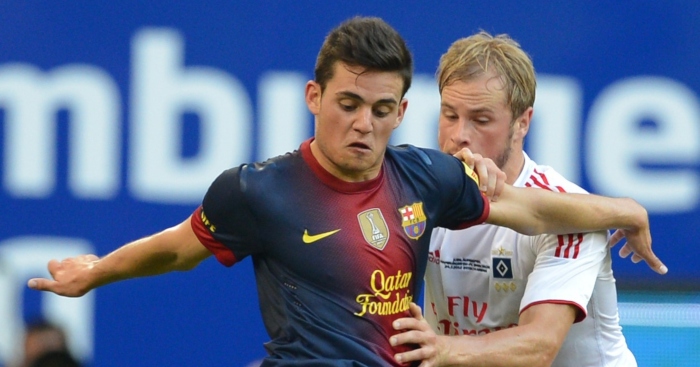 Manchester City are sometimes criticised for their inability to bring through youngsters into their first team, but one academy graduate says the club’s work is helping build careers all over the world.

Joan Román was brought to City from Espanyol as a teenager in 2009, but the closest he ever got to a first-team appearance in his three years at the club was as an unused substitute in a Europa League fixture against Sporting Lisbon in 2012.

However, he is not bitter about failing to make the grade at the Etihad and acknowledges the football education he and hundreds more received gave them the best chance of succeeding in the game.

“It’s a success (the academy) because you train with the best players, the best coaching staff, so you learn a lot,” he says. “It makes you evolve and grow into a better player.

“You’re under the pressure that you’re training with the best, so you have to be at that level. It gives you a mindset of if you don’t make it into the first team at City, which is very difficult, you know that you are going to go somewhere else and make a success of it.

“Obviously it would be a success if there were more players in the first team, but this is also a success to bring so many players through that can play at the top level in other places.”

There is no shortage of ex-City academy players shining around the world, including Adrien Rabiot, Ben Mee, Loris Karius and Kieran Trippier, who have all gone on to impress at the highest level.

“All the youngsters I played with at City are now playing in top leagues: John Guidetti, [Omar] Elabdellaoui, Denis Suarez and Ahmad Benali,” Román says.

“Loris is doing well too. Not everyone can be a superstar, but your schooling at City can make you know how to have a great career.”

A shining light in City’s youth teams, Román was promoted to train with the first team, forming a close friendship with Pablo Zabaleta, and the talented forward says playing with the stars was another crucial stage in his development.

“I remember at the beginning I was scared, anyone who says any different is lying, but it was only for the first few sessions and then you get used to it and adapt. We are made to adapt and if you don’t then you don’t train with them anymore.

“The players are there for a reason because they are so talented. They are not there because of luck, and that inspires you and gives you the energy to keep going and ask, ‘Why can I not be like them?’”

Román impressed enough to make the bench against Sporting in March 2012, but just a few months later he was allowed to leave to join Barcelona, where he would spend three seasons, including a loan spell in the top flight with Villarreal.

He even achieved a milestone by scoring the first goal of the Luis Enrique era at the club.

Román spent pre-seasons with the first team, working alongside some of the biggest names in the world. Just like at City, he tried to learn from the likes of Leo Messi – but there is no copying Lionel Messi.

“I’ve never seen anyone from another planet, but it must be similar to him [Messi],” Román says. “What you see on TV is what he does in training, you cannot get near him.

“His legs are so powerful, when he controls the ball, it’s like he has glue on his boot and he makes it look so easy, which makes you think you can do it too, but you try and you can’t, he is just something else. The best I have ever seen.

“Iniesta and Xavi were also like they were from a different planet. Iniesta looked like he was floating with the ball, he would dribble past everyone like this.

“Xavi was able to control the ball with his head up and never lose control of it, it was unbelievable. I’ve always been so lucky to train with the best players in the world…but Messi is at another level.”

After spells at Braga and AEL Limassol, Román is now playing some of the best football of his career in Poland, a country he knows well having previously played on loan there for Slask Wroclaw.

A bad ankle injury has hampered his progress in recent years, but since joining Miedz Legnica in January he has shown his capabilities, earning a reputation in the country for his spectacular goals.

“I am feeling great and all I needed was someone to trust me after the injury to give me some minutes to give what I know I have inside,” he says. “Little by little it is coming so it is now time to enjoy football and this is how you get the best out of you.”

Some think of Poland as something of a footballing backwater, but Román believes it is the right place to rebuild after accepting Cypriot football is not the place to move forward. Playing passing football in a team with four fellow Spaniards has helped him settle, too.

“I came here as it’s a league that people don’t know too much, but it’s a very competitive league with very nice stadiums and atmosphere and you feel like a professional footballer.

“In Cyprus there is a lot of quality, but the atmosphere that surrounds it, maybe it’s just me, but it just doesn’t make you feel professional. My goal is to play as many games, be consistent, and I know if I do this I can show my potential.”

Román has started to do exactly that, and still only 25, he could yet become the next Manchester City graduate to show what he can do at the highest level.