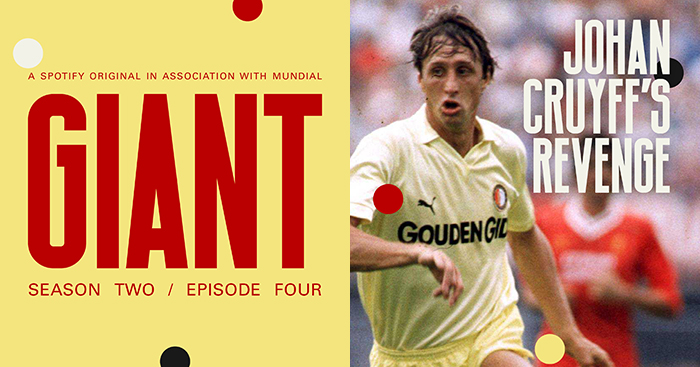 Johan Cruyff will always be synonymous with Ajax, yet for the final season of his playing career, the Amsterdam club and its eternal icon were sworn enemies.

As he had always promised, Cruyff retired at the age of 31 in 1978, only to make a brilliant but bizarre return with the LA Aztecs after his investment in pig farms went belly up. Mojo rediscovered, he returned to Ajax in 1981 and duly helped the club win two titles and a Dutch Cup in two seasons.

The second of those campaigns saw a 36-year-old Cruyff miss 13 league games through niggling injuries but still contribute nine goals and 14 assists. He even scored the last goal in the Dutch Cup final victory over NEC Nijmegen as Ajax claimed the Double.

Despite Cruyff’s desire to remain at his boyhood club for one final season, Ajax’s board decided not to renew their ageing star’s contract. “I’m going to another club. I won’t tell you which club, but you will see,” Cruyff told Ajax manager Aad de Mos. “I will go to a big club and you will have problems next season with your young team.”

Furious with Ajax, Cruyff opted to join the one club that would hurt his former employers more than any other: their fiercest rivals Feyenoord. But while Cruyff was now determined to prove Ajax wrong, his allegiance with the Amsterdam outfit meant he was still hated by Feyenoord’s supporters. In Rotterdam, season tickets were ripped up upon the arrival of the greatest Dutch player in history. “Feyenoord for ever, Cryuff never,” read one banner.

In episode four of the second series of GIANT, the award-winning Spotify Originals podcast produced by MUNDIAL, we’re taken to the Netherlands to hear from Cruyff’s former managers, team-mates and supporters, who tell the story of how the man that sweated class ended his career with one huge ‘fuck you’ to those who previously adored him.

Johan Cruyff’s Revenge is an exploration of how rejection drove one of football’s most iconic figures to turn against the club he loved, and how the man author David Winner dubbed “pythagoras in boots” inspired those around him to glory.

This is a story about a 36-year-old superstar raging against the dying of the light. Hellbent on proving that rejection was a mistake.

The episode is centred around the four De Klassieker derbies that season, the first of which ended with Feyenoord being humiliated 8-2, with Cruyff jeered as his mistake after just five minutes led to Ajax scoring.

Afterwards, Cruyff was determined to channel his anger and humiliation into something more positive. In the dressing room he told his team-mates not to panic and even appeared on the Dutch equivalent of Match of the Day to relay the message to the baying public: “You wait. At the end of the 34 games, you’ll see.”

We won’t go into too much detail about how the rest of the season unfolded, but it’s safe to say the episode isn’t called Johan Cruyff’s Revenge for nothing. 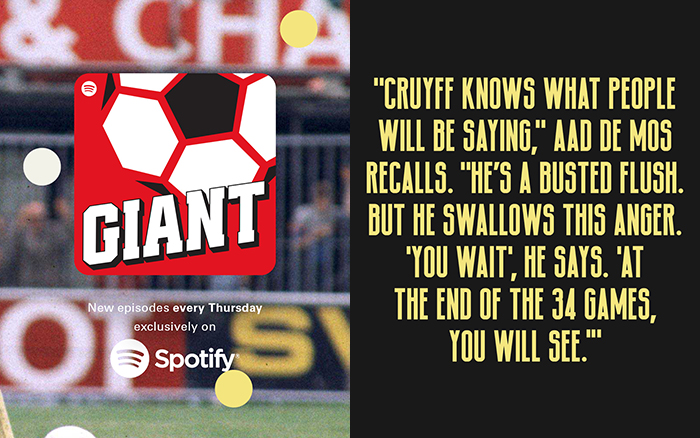 One particular detail we loved, however, was Cruyff’s solution to a tactical problem facing Feyenoord. Tired of being dragged out wide onto the left flank to defend rather than dictating play from the centre of the park, Cruyff took a shining to Stanley Brard, a 25-year-old left-back on a part-time contract, who trained twice a week and worked as a PE teacher.

Brard caught Cruyff’s eye thanks to an engine that allowed him to run and run all day up and down the touchline. Such was Cruyff’s influence, he decided Brard be deployed on the left wing ahead of fan favourite Pierre Vermeulen.

“So the story goes, but he didn’t tell me,” says Brard. “He had a lot of influence in the team and also with the coach. He could spare energy for different things. Sometimes I was running and I would pass him and say, ‘You can stay, I will do it.’”

Brard was expected to leave Feyenoord come the end of the season and would more than likely still be teaching PE were it not for Cruyff’s foresight. Today, he is head of Feyenoord’s academy.

At the time, supporters were unhappy with the decision to drop Vermuelen, but they were soon convinced by Brard when they saw his inclusion in the side provided balance to the team, freeing Cruyff up to…well, to be Johan Cruyff.

What happened next? We’ll leave that for MUNDIAL to explain.

Listen to Johan Cruyff’s Revenge now. It’s 23 minutes and eight seconds of gold about one of the most alluring characters to ever play the game. Seriously, what more could you want?