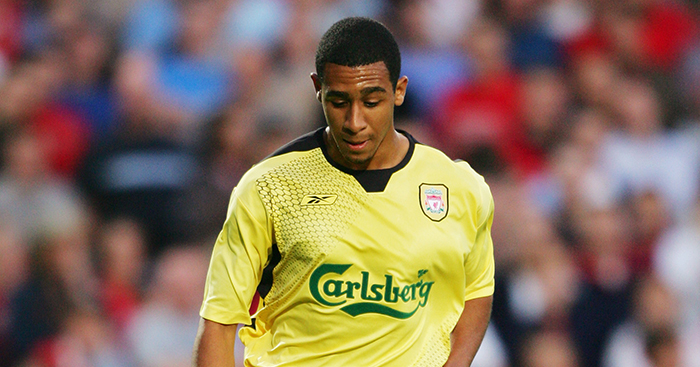 Jon Otsemobor only ever made six appearances for Liverpool, yet his is a name no Reds fan of that era will ever forget. For just a year after his debut at Anfield, he was shot in the buttocks.

Born and raised in the Speke area of Liverpool, Otsemobor, the son of a Nigerian father and a mother of Irish descent, did not play organised football until he was 13 but was soon spotted by both Everton and Liverpool, opting to join the latter’s academy.

Converted to a right-back, he was a fixture in Liverpool’s reserve side throughout the 2000-2001 and 2001-2002 seasons, where he caught the eye of the club’s first-team coaching staff.

And Otsemobor vividly remembers the day in November 2002 when assistant manager Phil Thompson told him he would be starting a Worthington Cup tie at Anfield against Southampton.

“A couple of us young pros were taken over to training with the first team before the Southampton game, but we didn’t do any training specifically about the opposition,” Otsemobor recalls.

“I was told to travel with the first team to the Marriott Hotel, which is where the squad went if they had a night game at Anfield.

“I was rooming with John-Arne Riise and when we came back up to the room from dinner the phone went and John told me that Phil Thompson wanted to speak to me.

“Phil said that I was going to be playing that night, to ‘get my head on it’ and to ring my mum so she could come to the game. Obviously I was buzzing.

“The next thing, I was sitting in the dressing room with people like Steven Gerrard, but I wasn’t nervous as I had played at Anfield for the youth team.

“I was actually sitting in there before the game with my legs crossed, in a world of my own. Phil Thompson came up to me and said, ‘Alright, son? If you want to play, you’d better liven up.’

“Thankfully, I didn’t give the ball away that night, I had a 100 per cent pass completion ratio and we won 3-1.”

Otsemobor played nine games on loan at Hull City later that season and looked to have a bright future ahead of him at Anfield, but in October 2003, 11 months on from his debut, he made headlines for rather different reasons when he was shot.

“My friend had just had his first son, so we all went out to town to wet the baby’s head,” he said.

“We went to a place where Robbie Fowler had a bit of a trouble a few months earlier, but I wasn’t a high-profile player and I was just out with my mates so I didn’t think anything of it.

“My friend was having trouble with a lad in the club so he took a gun off another lad, despite us telling him not to.

“This other guy fired a gun in my direction, probably to scare me away, but it took some other lad’s hand off and then it hit me.

“I felt a bit weird and when I pulled out my hand from down the back of my pants it was like I’d dipped it in red paint, there was so much blood.

Jon Otsemobor suffered one of the most bizarre injuries in the history of Liverpool FC in October 2003. He needed a few weeks to recover after being shot in his buttock in an argument in a bar! pic.twitter.com/n9UyIlWjE2

“I started panicking but waited for the ambulance in the basement with my friend.

“When the paramedic arrived, he told me that the bullets had passed through me and that, had it hit me further up, my hip would have been shattered and that would have been the end of my career.”

He stayed in hospital overnight and was soon the subject of unsavoury rumours, both in the newspapers and in football.

“I was unfairly tarnished,” Otsemobor says.

“People started saying I was involved in gangs – you know, a young, black Scouse lad, so anybody who didn’t know me would automatically believe what was being said.”

Thankfully for Otsemobor, Liverpool stuck by him. And in December 2003, just a couple of months after the incident, Gerard Houllier handed him his second senior start in a Carling Cup defeat to Bolton at Anfield.

Three days later he made his Premier League debut in a 1-1 draw at Newcastle United. He kept his place for the next three games, too, but was injured in a 2-2 draw at Manchester City which proved to be his last ever appearance for Liverpool.

He went out on loan to Bolton but played only once, and then his prospects took a fatal nosedive in the summer of 2004 when Rafael Benitez succeeded Houllier.

“Every manager wants to bring in their own players and it was made clear from day one that Benitez didn’t fancy me. Steve Finnan was first choice at right-back and then he brought in Josemi, the Spanish right-back, as well.

“I still had a year left on my contract, so went on loan to Crewe. When I came back, I met with Benitez in his office and he told me he wasn’t going to give me another contract.

“I didn’t want to leave Liverpool and I was sobbing in the room, asking Benitez to give me just an extra year, but he told me he had made his decision.”

Otsemobor spent half a season at Rotherham United before enjoying successful spells at Crewe, Norwich City and Southampton.

An injury-plagued stint at Sheffield Wednesday was followed by 18 months at MK Dons, where he became a cult hero thanks to an injury-time winner in an FA Cup tie against Wimbledon. The strike became known as The Heel of God and led to him being awarded Goal of the Decade at a club awards ceremony.

And out of nothing, Jon Otsemobor has won it for Milton Keynes pic.twitter.com/IZGgwkuIsN

Unfortunately for Otsemobor, injuries began to take their toll, and in 2014 he was advised to retire at the age of just 31 due to ongoing knee problems.

It was a bitter pill to swallow but, unlike many other footballers who are forced to retire prematurely, he had something to fall back on, having invested in property.

However, despite becoming a successful businessman, the father of three admits he still struggles to watch football.

“For the best part of two years after I retired, I wanted to be a million miles from football and anyone to do with it,” Otsemobor says.

“I couldn’t even play FIFA online with the lads because I didn’t want to listen to the conversations about upcoming games and I couldn’t accept the fact that I could not play football anymore.

“It’s got better over the last 16 months and I have been once to Anfield this season to watch a game – before then I couldn’t even remember the last time I had been back there.

“I hardly speak to any football mates anymore because I am not part of that world now.”

One player Otsemobor has been pleased to see doing well, however, is Trent Alexander-Arnold, another right-back from the city whose progressed through Liverpool’s Academy.

“I have watched him a few times and he has been exceptional,” Otsemobor says.

“He’s overtaken (Nathaniel) Clyne, who they bought for a lot of money, and made the position his own.

“I don’t know Trent, but I have heard he’s a nice, well-grounded lad and doesn’t mix in the wrong circles like I did when I was his age.

“I do have regrets – I wouldn’t have gone to the places I used to go to when I went out because it painted the wrong picture of me.

“People know me for the wrong reasons.”

This interview was originally published in February 2019.

READ NEXT: Sean Dundee: I should have worked harder; I wasn’t fit enough at Liverpool