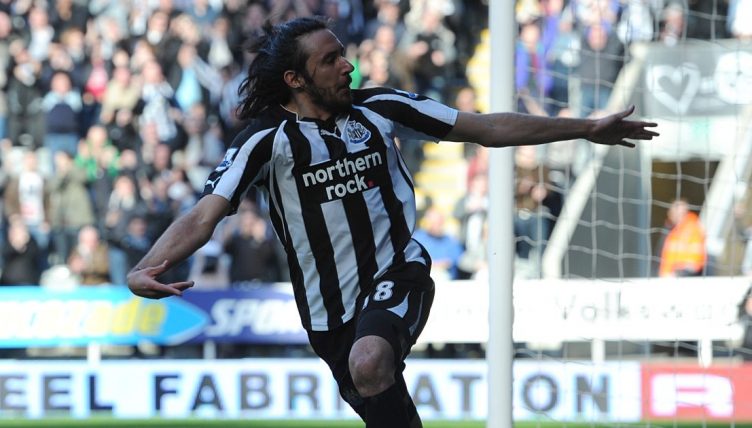 Jonas Gutierrez sued Newcastle United for disability discrimination after being dropped as a result of his battle with testicular cancer, yet speaking to him it’s clear he still has nothing but love for the club.

Gutierrez was diagnosed with cancer in October 2013 and had his testicle removed a month later, but the previously key member of the Newcastle side found himself suddenly out of the picture following the surgery and was loaned to Norwich City in January 2014.

A tribunal later found that Newcastle ‘deliberately managed’ Gutierrez selection to prevent him from triggering an automatic contract extension, but the former Argentina winger still managed to mark his mark, setting up one and scoring the other against West Ham on the final day of the 2014-15 season to ensure the Magpies’ Premier League survival.

He left for Deportivo that summer, but despite the way things ended, Gutierrez chooses to remember only the good times.

“I was sad when I left because it was hard to leave a club and a place I love,” he says.

“But when I look at my past, I think about the good things, like the fans and their unbelievable messages of support. For that, I can only say thank you.”

Even his battle with cancer provided Gutierrez with positive memories. Along with his goal against West Ham, he ranks his first game back for Newcastle after his illness – against Manchester United in March 2015 – as the best memories of his career.

“When I came back against Manchester United, I entered the pitch and Ryan Taylor came out,” Gutierrez says. “He had lots of injuries too and I was happy for him because I think he is a fantastic man.

“I played left-back and the first action I gave away a free-kick and got a yellow card. The fans were laughing and shouting, ‘He’s coming back from cancer, don’t book him!’

“The ref said sorry to me, but he was right, it was a yellow! When you don’t play for months, it is easy to be late.

“For the last game of the season, I really was thinking it could be my last game for Newcastle. I was ready for all possibilities, but I didn’t want Newcastle to go down. The ovation I got was amazing.”

That ovation came some 18 months after he began his treatment and what he describes as the toughest period of his life. But he certainly wasn’t in the mood to give up once it became clear Newcastle were in danger of being relegated.

“To be honest, it was something new. I didn’t have that much information, so it was a case of going to see the doctors and being told what to do.

“The first thing I was thinking was, ‘I don’t know what to do,’ because I didn’t understand about cancer.

“Obviously, I didn’t know if I would be able to play again and it was tough. But once I was feeling stronger and I played a few games with the reserves, it was important to get back because I didn’t want Newcastle to go down again.”

Gutierrez had joined Newcastle seven years earlier in 2008 from Mallorca, six months after missing out on a move to Portsmouth. Looking back, he’s more than happy with the way things turned out.

“As a young boy, I used to get up early to watch English football, and it was my dream to play for one of those teams.

“I knew Newcastle because of the film “Goal!” with Santiago Munez, and also because of Daniel Cordone and Christian Bassedas, who were playing there and had been at my team in Argentina, Valez Sarsfield.

“I had the opportunity to move to Portsmouth the previous January, but Mallorca didn’t want me to go. It was hard at the time because I loved the Premier League, but then I moved to Newcastle, and after what I did there, I have to say it was the best decision of my life.

“Newcastle fans are different, you don’t find this kind of support in many places. They make you stronger and send you their love.

“It is not just the boys and the men, but the women and the grandmas. The city depends on football, it is so important. They are incredible.” 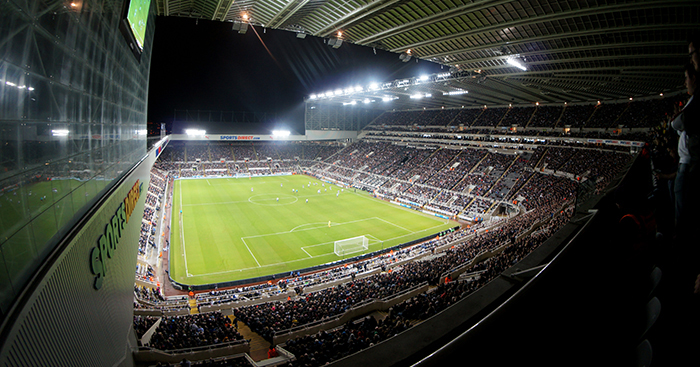 READ: What Makes A Club: 21 photos to explain the special St James’ experience

Not that it was all plain sailing on the pitch. But despite Newcastle being relegated from the Premier League in his first season at St James’, Gutierrez had already fallen in love with the club.

Desperate to help them achieve promotion but worried how playing in the Championship might affect his chances of going to the World Cup in 2010, he was convinced to stay by none other than Argentina boss Diego Maradona.

“I didn’t want to leave Newcastle after we were relegated,” he says. “The only thing was the World Cup, it was my dream.

“Maradona called me and said ‘I don’t care where you play, in the Premier League or the Championship, I just want you to play well’.

“For me, it was great to hear that because I was thinking about two things and he made it easy. I was in a place that I loved and I didn’t want to move.”

Despite those reassurances, Gutierrez admits he was stepping into the unknown as he prepared for the promotion push.

Chris Hughton was in charge and nobody knew what to expect, but Newcastle would go on to win the league at a canter, amassing 102 points, while Gutierrez would join Lionel Messi and co at the World Cup. 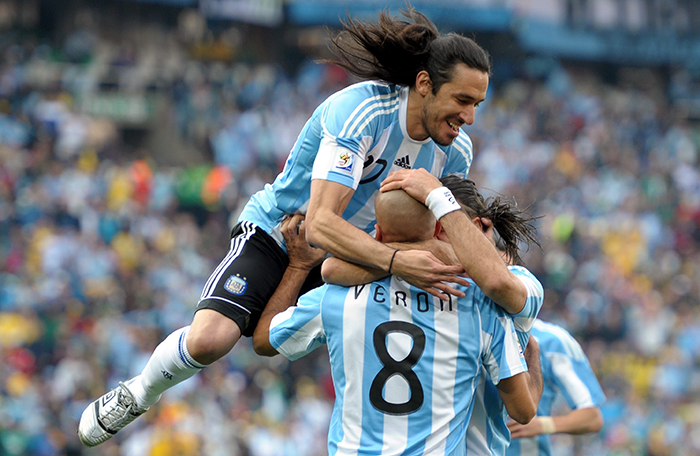 But the whole campaign hinged on one particular day in pre-season, after a 6-1 defeat at Leyton Orient.

“Chris was fantastic, we knew him because he was our coach the year before and he really helped us. He was always interested in helping us at a human level,” Gutierrez says.

“But it was tough. We knew players were moving, and we wondered how strong the squad would be because players weren’t arriving.

“In one of the first friendlies, we lost 6-1, and to have that kind of result made you think, ‘What is going on?’ But the squad was really together and you could see the players really cared.

“The day after that, we spoke at training and said, ‘Listen, if you want to go, just say, it is not going to be a problem, but we need people that want to fight.’

“That game, and that meeting, was the start for us.”

Upon their return to the top flight, Newcastle began to string some good results together. By December, they were safely in mid-table, having beaten Sunderland 5-1 in the Tyne-Wear Derby and won 1-0 at Arsenal.

But that didn’t stop Newcastle sacking Hughton and replacing him with Alan Pardew.

Gutierrez says it was a “surprise” to the players, but Pardew’s arrival did signal an upturn in fortunes initially, as the team narrowly missed out on the Champions League in 2011-12.

But further misery followed with more battles against relegation despite a run to the Europa League quarter-finals in 2013.

Key men in the team that got promoted, including Kevin Nolan, Joey Barton and Alan Smith, had been let go, and according to Gutierrez, the squad wasn’t strong enough to cope without them when the going got tough.

“It was hard because that group was always together, fighting for the same things,” he says. “It normally happened at Newcastle, but players got long-term injuries and we didn’t have a big squad.

“We needed more players at a key moment of the season because it is hard to play with the kids. They need time to learn and you can’t expect too much from them.

“In the years we battled relegation again, it was hard because we didn’t have those characters.

“I liked talking to the young lads, but you don’t want to lose players like that. Sometimes it was hard to get our best team together.”

Gutierrez also believes Newcastle could have done more to prevent Jose Enrique from joining Liverpool in 2011, adding: “I spoke with Jose and the club didn’t give him the contract he wanted.

“He wanted to stay and I think the club pushed him out, they didn’t want him.

“Whenever we speak now, we always remember our time together at Newcastle.”

Enrique and Fabricio Coloccini were Gutierrez’s best friends at the club, but the winger was unsurprisingly a popular figure in the dressing room, maintaining his positive attitude even during darker times and becoming known as the joker in the squad.

“I had a great relationship with Ryan Taylor, James Perch and Rob Elliot, and I was always singing. We made jokes between ourselves…nice jokes, nothing too harsh!

“I still talk with those guys now, so it was great to share those moments with them.

“You have to be positive. To laugh and be happy is one of the best things in life. To make your team-mates laugh improves the atmosphere, and even after a bad result that is important because nobody wants the club to go down.”

That attitude and fighting spirit have served Gutierrez well both in football and in life. Now 35, he is back home in Buenas Aires, plying his trade for Defensa y Justicia and nearing his recovery from a knee injury that has sidelined him for six months.

And sooner or later he has promised to return to Tyneside to see the supporters again as they continue to protest against Mike Ashley’s ownership of the club.

“I have so many messages from the fans saying they will buy me a beer in Newcastle. One day I will be back.

“If they are sad, I stand with them because I know how much they care. They know the truth.”

This article was originally published in March 2019.