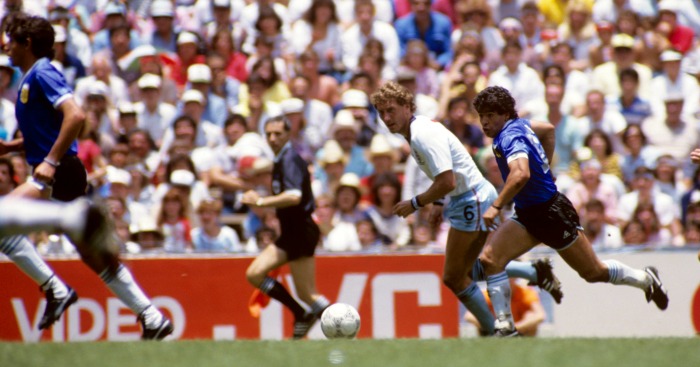 The same applies – for a window of around 20 years, at least – to the most important thing in football: that is, the ball itself.

In 1978, named after the late 19th-century Argentinian partner dance, the Adidas Tango was born.

Ten years earlier, players and fans had a revolutionary new ball design thrust upon them, based on the work of former Danish international goalkeeper Eigil Nielsen.

His new 32-panel ball – itself owing much to the geodesic domes of American architect R. Buckminster Fuller – is technically a “spherical truncated icosahedron”, but we have come to know it as the enduring, copyright-immune ball of cheap birthday cards, Alamy stock images and every football-related advert ever.

One of the least convincing Generic Footballs I have ever seen, as featured in Sky Sports' latest advert. pic.twitter.com/nqFYxY4xAU

Taking over from the brownish orange cannonballs, the Telstar was a response to the growth of live TV coverage, appropriately borrowing its name from the NASA communications satellite of the early 1960s.

Its purpose was to be easier to see on screen, but not even Nielsen himself could have imagined that, several decades later, it would still be the universally-accepted symbol for “football”, or possibly even “sport”. Even now, given a pen and paper, nobody is going to be drawing you a picture of a Jabulani.

By the late 1970s – despite the sterling work of Pelé and Cruyff with the Telstar, even if it looked rather too keen to send itself into orbit at times – a more subtle, understated design was on the table.

Gone were the rather harsh black pentagons and in came the interlocking triads, elegantly forming circles around the ball. What results is a satisfyingly balanced optical illusion: either you notice the pattern, or the neat holes of white it creates.

Revolution didn’t come cheap. The ball retailed in the UK for somewhere between £35 and £50 – which is knocking on for £150 in today’s money – which perhaps ultimately added to its other-worldly appeal: pretty much nobody you knew ever actually played with one.

Despite some hedged bets – one more Telstar design was released in 1978 in case the Tango was met with a global shrug of the shoulders – the new ball was a huge commercial success, so much so that Adidas decided they wouldn’t fix what was already immaculate.

Enough of the backstory, though, because what really ought to be laid down here is that the Adidas Tango represents a truly glorious era of football history.

In hindsight, too, the Tango seems like a giant step for footballkind towards modernity, albeit just short of the post-millennial saturation point we’re crashing into right about now.

#WC1978: the official ball with the autograph of #MarioKempes, the best player of the tournament. #Kempes #Tango #Argentina pic.twitter.com/x2A6LQjwoz

The Tango – and its close descendants – was omnipresent for all the truly iconic moments of international football from the late 1970s to the end of the 1990s.

Having made his Argentina debut in 1977, Diego Maradona arrived just at the right time to become the Tango’s first unwitting ambassador. Try as he might, a twilight-years George Best just looked a bit strange with a Tango at his feet.

Conversely, the thought of a cumbersome-looking Telstar, or whatever peach-flavoured monstrosity they’re using today, being stuck to Maradona’s toe as he weaves through a thicket of hatchet men doesn’t seem right at all.

Keen for consistency, but also mindful of cold, hard cash, Adidas tweaked the design almost imperceptibly from one tournament to the next.

The original Tango was almost identical for its first two FIFA outings – and even bore the words “Official World Cup 1978” when used in the 1980 European Championship, at which point the decision was rubber-stamped to make a exclusive version for each tournament.

That led to perhaps the Tango’s design peak – the 1984 Mundial, with its untroubled triads complemented with a splash of red in the detail – ready to be caressed around on home turf by Michel Platini at the Euros that summer. Has there ever been anything so beautiful as this?

Having firmly established itself as the Telstar’s rightful successor, the Tango just needed its own showcase moment, its own Brazil 1970. Then, with perfect timing, came Mexico ‘86, the Tango Azteca and arguably the most photogenic World Cup of all…

…and then, alongside the greatest kit ever seen, the Tango Europa was treated with utmost respect by Marco van Basten and the Dutch in 1988.

With its legacy sealed, the Tango could let its hair down – the Etrusco delved into the ancient history books for Italia ‘90, before the design officially gave way to the NASA-inspired Questra for USA ‘94 – even if the overall pattern remained the same.

By the time of Euro ‘96, even if the interlocking triads still survived, the multi-coloured ball was now starting to emerge. No amount of Fevernovas, Teamgeists or Brazucas, though, can take away the masterful memory of the Tango.

You can – away from the mortgage-busting retro markets on eBay – still get hold of one today.

Bought an Adidas Tango and, in the process, rendered life complete. pic.twitter.com/MQm3MsVFBL

The vastly inferior Rosario and Pasadena versions have a rather apologetic, plastic shine to them and – even if their names conjure up images of Kempes ‘78 and Romario ‘94 – they’re more likely to fly on to the nearest A-road to an early death.