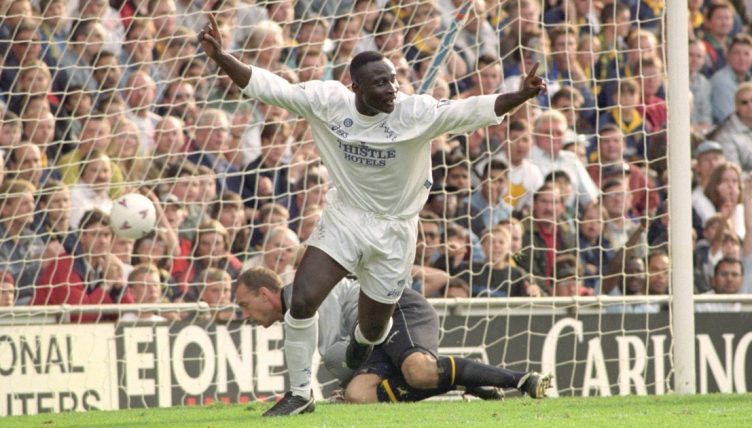 Tony Yeboah for Leeds. Steven Gerrard for Liverpool. Paul Pogba for Juventus. Some of the most enjoyable goals of all time have been half-volleys…

The finest co-commentary minds of our time – Atkinson, Townsend, Beglin, Hargreaves – have never seemed to reach a consensus on what exactly is the hardest skill in football.

Various candidates are put forward every now and then, most of which tend to be the controlling or striking of a ball as it comes from an awkward angle – over the head, across the body – but we tend to settle on them merely being “one of the hardest skills in football”.

There are dozens of ways to score a spectacular goal, it should be said, but most of them fit neatly into one category or another.

Free-kicks (curled over the wall, or swiftly punched beyond it in that way nobody can describe without mentioning Cristiano Ronaldo), volleys (dipping, crashing, acrobatic, you name it), or your garden-variety, Ronnieradfordian screamers: they’re all instantly recognisable as wondergoal sub-genres.

Somewhere, though, amid the spider’s web of classification is an underappreciated art form: the half-volley.

Thanks to being mired in an age-old debate over what, first of all, constitutes a volley (most commonly a pitched battle between the no-bounces-allowed majority and a few as-long-as-the-ball-is-in-the-air insurgents), half-volleys have been relegated to an afterthought.

But no sport – not tennis, and probably not cricket – features them to such a satisfying degree as football does.

What’s the appeal of a half-volley? For one, they represent the perfect collision of timing and good fortune. There’s no coaching manual that can teach a footballer to adjust their stride to arrive at a bouncing ball right at the optimum millisecond, but at the same time, an element of luck is needed for it to fall just in the perfect place to be taken advantage of.

And that’s the crucial bit. By definition, the half-volley’s pivotal moment is when it pops up of the turf with barely enough time to beg to be hit before it is, indeed, hit.

And there’s no purer-struck ball than one momentarily freed from the friction of the pitch, whether it’s the bowling green of the Emirates or an undulating Sunday League minefield.

Nobody’s had the time or inclination, surprisingly, to officially define a half-volley in the strict terms of how long the pause can be between bounce and shot. That has led, shamefully, to the anarchy of describing any shot taken after the ball has bounced as a half-volley: for example, Jamie Vardy’s viciously looping strike against Liverpool last season.

In the absence of a sports scientist with a stopwatch, then, we’ll have to be more creative: a half-volley must have a post-bounce interlude no longer than the hyphen in its name.

The half-volley happily defies the unwritten rule that a goal’s wonder should be directly proportional to how difficult it was to score. It’s a highly economical type of wondergoal in the right conditions and about as far from Maradona ‘86 as it’s possible to get.

Such is the straightforwardness of its execution, once the stars have aligned for it to be possible, that the scorer often knows the ball is goalbound as soon as it’s left their boot. At worst, a half-volley can be sent tidily into the upper tier, but a half-volley is very rarely scuffed.

It’s also a great leveller; the most accessible form of wondergoal. For every Tony Yeboah for Leeds, there is a Tom Huddlestone for Spurs. For every Steven Gerrard vs Olympiakos there is an Alan Wright vs Spurs.

This belter from Alan Wright for @AVFCOfficial ticks a lot of boxes:

The search for the definitive half-volley takes in every variant of what is a highly watchable form of goalscoring, but they can essentially be boiled down to three main types.

First, the Belter, which is commonly characterised by its lengthy run-up (and, the longer it is, the more you wonder how body and ball can coincide so precisely at the end of it) and sheer brute force.

The second flavour of half-volley celebrates its inherent grace.

Taking the ball on the turn, as well as the bounce, gives the poor goalkeeper barely any notice of what’s about to come their way.

For a wondergoal, it’s about as under the radar as you can get.

The third variant of the half-volley to be examined here is a neat combination of irresistible power and glorious trajectory.

It confirms, more than any other, that you really are allowed to do whatever you like to a ball when it’s suspended, helplessly, a few centimetres above the turf.

It’s the sort of emphatic swerve that a player would have to train for years to perfect on a dead ball, but the half-volley entitles you to a carefree swipe – and all the rewards that follow.

Perhaps the half-volley is the shot that holds the key to the cryptic mess that is “if anything, Clive, he’s almost hit that too well” – the idea that a ball can be struck too perfectly, too cleanly, so that it either flies gleefully over the bar or straight into the arms of a keeper who’s able to watch it all the way.

At its very best, though (a level even an average five-a-side player could reach every now and then) the half-volley is a highly telegenic act of graceful footballing violence like no other.

There’s no half about it.