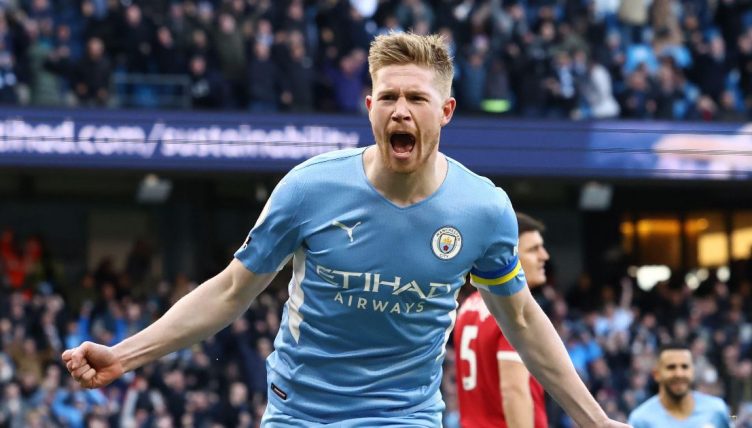 It was appropriate that Manchester City’s 2021-22 Premier League title win required a moment of magic from Kevin De Bruyne on the final day.

Pep Guardiola’s side had staged a stunning comeback against Aston Villa, scoring twice in two minutes to restore parity after Matty Cash and Phillipe Coutinho had given the Villains a two-goal lead at the Etihad.

However, Rodri’s equalising goal was not necessarily enough to seal the title. City knew that should Liverpool take the lead at Anfield – which they later did through Mohamed Salah – the title would go to the Reds.

That was before De Bruyne had his say. The clock was ticking towards the 81st minute when the Belgian pounced on a loose ball just outside the area, drove into the box and fired the ball across the goal to the back post, as he so often does. There was Ilkay Gundogan to finish, as he so often has done since Guardiola reinvented him as a goal threat.

With that goal, City’s grasp on the title was much more sure. They would not relinquish it and they went on to celebrate their fourth Premier League title in five seasons. De Bruyne has been at the heart of City’s fantastic season and was rewarded for that fine form with the Player of the Season award from the Premier League.

To some publications and on social media, this was the wrong choice. Nobody would deny De Bruyne’s excellence but he had only played 65% of the minutes available in the league, compared to Salah’s 81%. Meanwhile, the Egyptian contributed 23 goals and 14 assists the Liverpool’s title challenge, whilst City’s man scored 15 times and assisted eight.

However, to really tell the story of De Bruyne’s season, we need to dig beneath the surface of those headline figures. Salah still comes out on top if those goal contributions are summed to per 90, as the Liverpool forward scored at a rate of 0.75 goals per 90, whilst assisting 0.42 goals per 90. That compares to De Bruyne’s 0.61 goals and 0.33 assists per 90.

Yet importantly, and perhaps surprisingly, if penalties are removed from the equation, the Belgian’s goalscoring return was more regular. Salah scored 0.59 non-penalty goals per 90, whilst De Bruyne’s figure remains 0.61 as none of his 15 goals were penalties. That’s frankly remarkable for a player who has primarily been thought of as a creator rather than a goalscorer.

To put it into context, Frank Lampard is the greatest goalscorer from midfield in the Premier League era. In his best scoring season, he hit 22 goals in 36 appearances for Chelsea, as they won the Premier League title in 2009-10. However, only 12 goals were non-penalty goals – his highest ever tally – and those were scored at a rate of 0.34 per 90. The Chelsea legend wasn’t as prolific as De Bruyne was this season, even at his very best.

It is worth stating that at times De Bruyne has played as the ‘striker’ due to Guardiola utilising almost all of his midfielders and wingers there at some stage, but De Bruyne is no centre-forward. He still managed to score at a better rate than every forward who hit at least 10 goals this season, apart from golden boot winner Son Heung-Min who had a remarkable season of his own.

Like Son, De Bruyne vastly over-achieved his expected goals in 2021-22, as his fifteen Premier League goals came from 77 shots worth just 6.4xG, according to Statsbomb data (courtesy of FBref).

An overperformance of 8.6 goals on his expectation shows that he had a true hot streak in front of goal this season, which we perhaps shouldn’t expect him to continue based on previous seasons. He actually underachieved his xG by 3.4 goals last term. 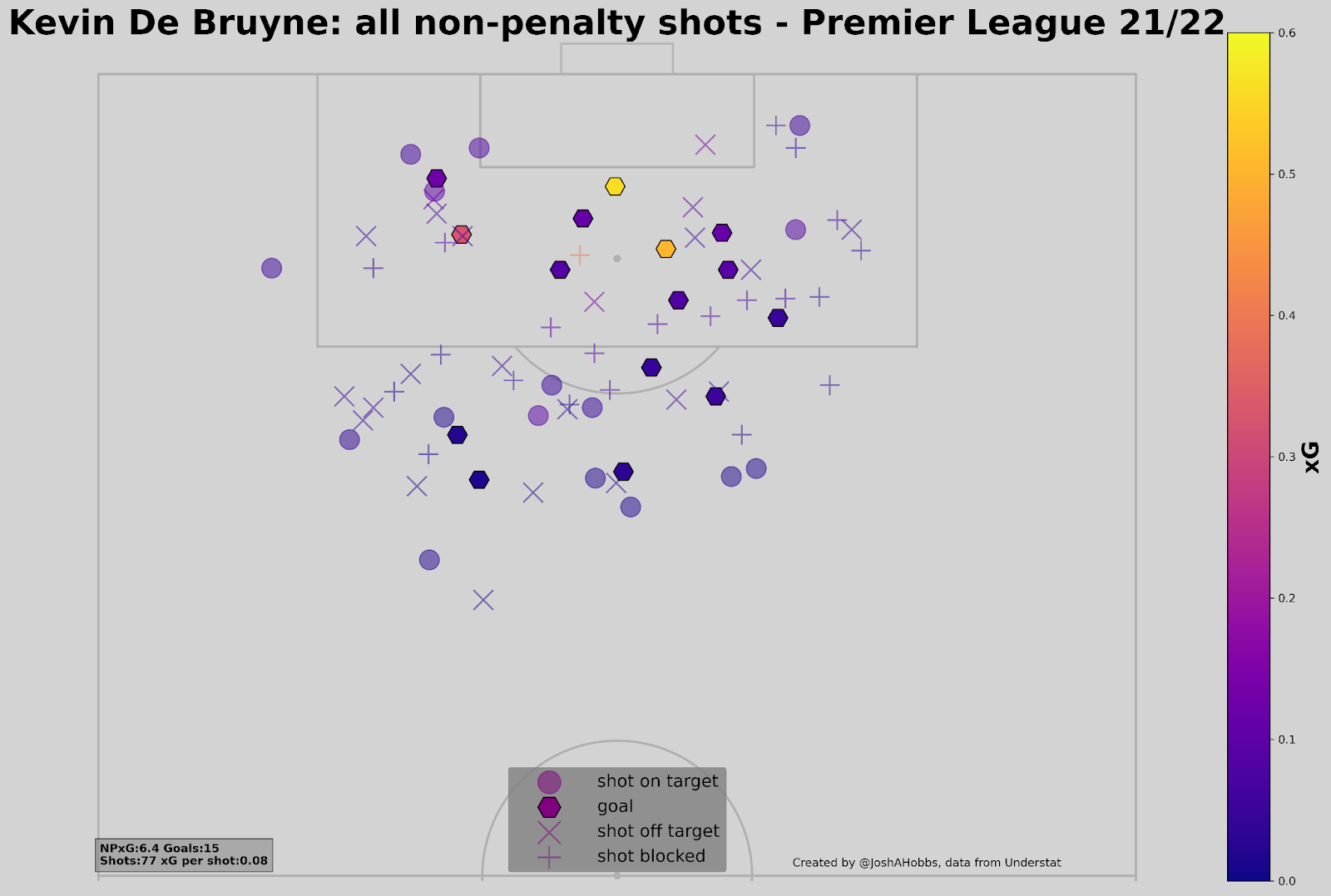 The Belgian’s hot streak this season mostly took the shape of a slew of goals scored from outside the box, as he scored five from beyond the 18-yard-line. As you can see in the shotmap above (data courtesy of Understat), these were all low-value shots in terms of xG but the quality of De Bruyne’s ball-striking was superb in 2021-22 and was a huge reason for his overperformance, as goalkeepers were left standing.

His strike against Leeds United in December was perhaps the pick of the bunch, as he struck the ball past Illan Meslier with real venom.

Kevin De Bruyne's second strike vs Leeds was recorded at 70mph – the 2nd hardest shot of the season resulting in a goal. ☄️🤯 @OptaJoe pic.twitter.com/XramkXgDX3

The heartbeat of the league’s most potent attack

As mentioned above, the Manchester City midfielder has primarily been known as a creator. Whilst he has exploded in front of goal this season, his creativity has not dried up.

Salah did outperform him in terms of assists but that metric is very misleading. It merely shows the number of times a player made the final pass before a team-mate applied the finishing touch, but it does not quantify creativity effectively.

For example, Sergio Busquets was awarded an assist for Leo Messi’s iconic Champions League semi-final goal against Real Madrid when the Argentine beat several players before finishing. Meanwhile, a player could run the length of the field and square the ball for a tap-in just for their team-mate to miss and be rewarded with nothing if we only judge creativity by assists.

Instead, let’s look at expected assists, which aims to quantify the quality of chances created by a player’s passing, similarly to how expected goals calculates the probability of a goal being scored from a particular shooting opportunity. Here are the top ten performers by the metric this season, summed to a per 90 rate, data again comes from FBref: 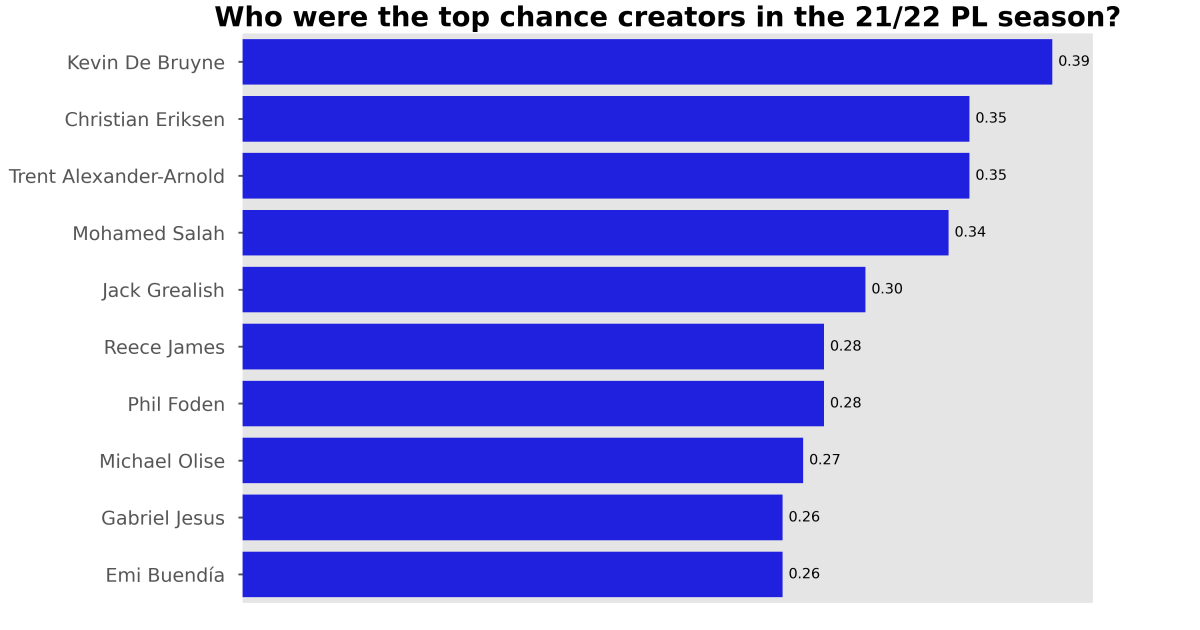 As you can see, nobody created chances of better quality than De Bruyne did in 2021-22.

Salah’s assists figure is so much higher because his team-mates were far more clinical. That’s demonstrated by the fact that De Bruyne’s total xA in the league was 9.5 and he ended the season with 8 assists. Meanwhile, Salah’s was 10.4 and he was rewarded with 14 assists.

Playing a part in the final action is not the only way to measure creativity. For example, it’s often the through-ball that puts a winger behind an opposition defence or a dribble through the centre which opens up an opponent and is the true ‘creative’ action in a goal being scored.

FBref’s custom metric, ‘shot-creating actions’ aims to give value to things players do before the key pass is made, in order to make sure that those creative actions don’t get missed out, even by looking at expected assists rather than assists.

According to this metric, De Bruyne was the player most involved in moves leading to shots out of all players to have played over 900 Premier League minutes in 2021-22: 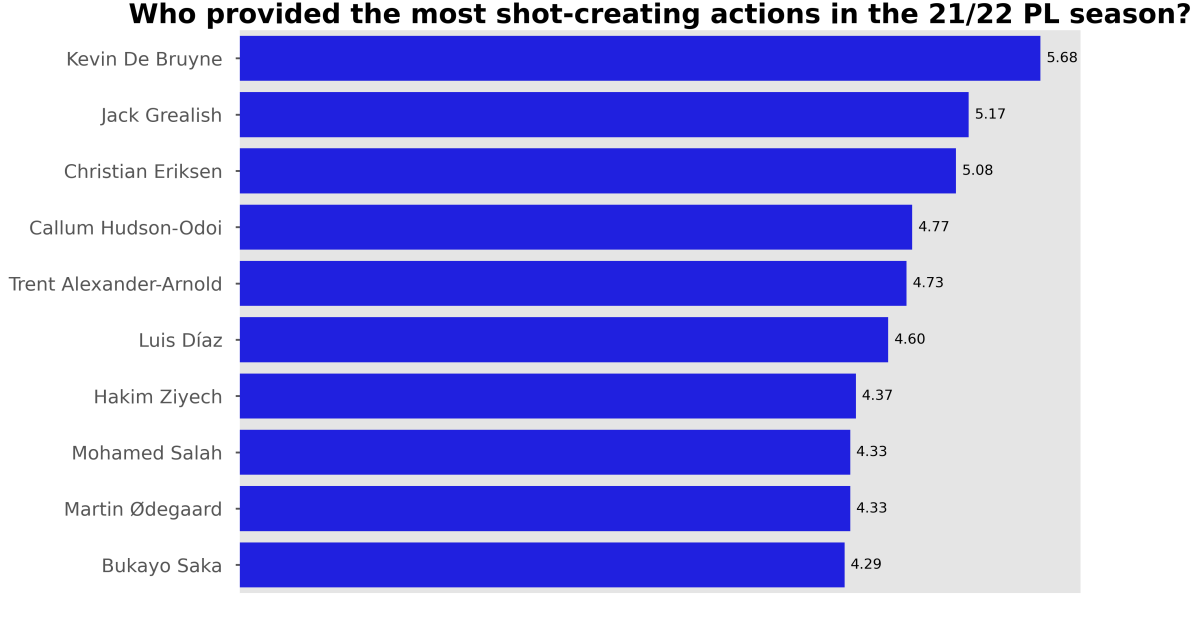 As you can see in both graphs, Salah is still in the picture as a top performer but the underlying numbers suggest that De Bruyne did, in fact, have a better season as a goalscorer and a creator than the Liverpool forward did.

It shouldn’t come as a surprise to see the City man come in ahead of Salah in a metric like this, given that Liverpool’s talisman is a true forward. When he gets on the ball in the final third, he is absolutely deadly.

However, De Bruyne is the epitome of the modern midfielder. He has become the driving force for his team with the ball, as he will come seeking it in deeper areas, playing his part in keeping possession moving as Guardiola desires. When the moment comes to speed up the play and break an opposition line, he is the man who will do so most often, making a pass to one of City’s copious forward options.

The man for the big occasion

Paul Merson once called the fee that the Abu Dhabi-owned club paid for De Bruyne ‘an absolute joke,’ but he has made the £68.4million fee look a bargain over the years and none more so than this season as he scored in both league matches against Liverpool – particularly vital as City only took the title from Liverpool by a single point – as well as scoring in wins against Chelsea and Manchester United.

He also scored regularly in the Champions League knockout stages, including in both the quarter-finals and semi-finals against Atletico and Real Madrid. These goals wouldn’t come into consideration for any Premier League award but demonstrate further how the Belgian has stepped up as the player who will deliver important goals when needed, despite the fact that City somehow contrived to lose the semi-final.

Can he continue at this level?

City’s star man will turn 31 next season but he shows no sign of slowing down, after delivering his best season since returning to England.

Megastars such as Leo Messi and Cristiano Ronaldo have shown that reaching one’s early 30s isn’t the end for top players anymore and De Bruyne has the technical ability, as well as the physical attributes to continue at this level of performance. The only question will be whether he can avoid the injuries which have robbed him of significant portions of the last few seasons.

Regardless of the future, De Bruyne’s 2021-22 was absolutely spectacular. At this stage, he should be spoken about as one the Premier League’s greatest ever players, let alone greatest ever midfielders. If he puts together another campaign like this together in 2022-23, it will be hard to look past City for the title once again.