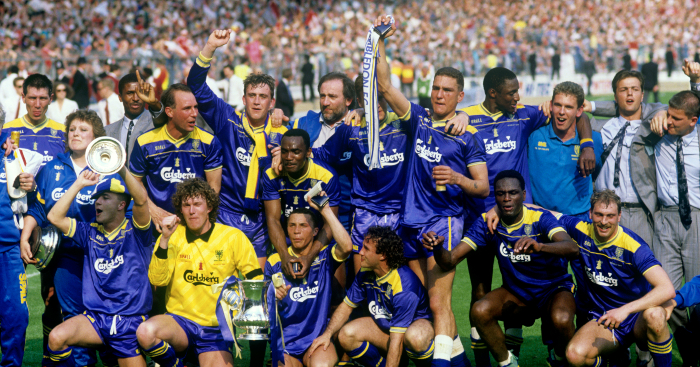 It was the sporting fairytale celebrated by the most modest of fan bases, a giant killing that created a slice of Wembley history few felt ready to toast.

Now, 32 years after his goal that fired Wimbledon victory in the 1988 FA Cup Final against the mighty Liverpool, Lawrie Sanchez looks back with pride on his entry into football folklore that has stood the test of time as one of the game’s golden moments.

For so many reasons, the football family refused to welcome Wimbledon to the top table after they had barged their way into the First Division with a brand of abrasive, direct, high-intensity football designed to ruffle the feathers of the big names in English football.

Their pantomime villains tag embraced by Sanchez and a team that included the likes of Vinnie Jones, Dennis Wise and John Fashanu.

Yet for one solitary afternoon in 1988, Wimbledon’s Crazy Gang joined the game’s list of winners as their remarkable rise from the lower reaches of the English game to the pinnacle of the sport was confirmed as they beat the best team in the land on the biggest day of them all.

Recently crowned champions Liverpool were widely expected to complete a league and FA Cup Double with ease after another dominant season, yet Kenny Dalglish’s side were undone by a first-half goal from Sanchez and Dave Beasant’s penalty save from John Aldridge.

Football purists were quick to suggest Wimbledon’s triumph was a victory for the ugly brand of the beautify game, but Sanchez believes history has a very different reflection on one of the most memorable victories in FA Cup folklore.

“I remember at the time that people were dismissing Wimbledon’s win and saying no one was celebrating because we were not very popular, but 32 years later and people are still talking about it and that says it all,” says Sanchez, ahead of a screening of The Crazy Gang on BT Sport 2 on May 14, the anniversary of Wimbledon’s FA Cup win.

“The fact that two TV documentaries have been made about it and I am always called in the second week of May to talk about this game tells me that we made our mark that day and I am proud to have played a part in the story.

“What you have to realise is none of us at Wimbledon saw our win as a massive giant killing. We finished seventh in the First Division that season and had pushed Liverpool close in both the matches we played against them winning in a one-off game. We fancied we could do it and so it proved.

“Yes, they were the champions, the best team in England, and players like John Barnes, John Aldridge and Peter Beardsley were in their prime, but our attitude was we can beat anyone on our day.

“Also, we had beaten Liverpool at Anfield the season before and believed we could unsettle them again. So it proved, as we did what we did best and I was fortunate enough to score the winning goal.

“They were dangerous if you let them do what they did best, but we didn’t let teams do that. We took them out of their comfort zone, did what we did best and got the result that gave us our moment of FA Cup history.”

31 years ago today Wimbledon denied Liverpool the double by beating them 1-0 in the cup final. @VinnieJones65, Lawrie Sanchez and @denniswise interviewed. pic.twitter.com/tlGl1wxes9

These were very different times, when the FA Cup final was the biggest day in the English football calendar as the one occasion every year when the nation ground to a halt to watch one match in unison.

“This was a special Wembley final in many ways,” Sanchez says. “It was the last one played in front of a big standing crowd and an attendance in excess of 98,000, and it was an occasion that is hard to recognise for young supporters these days.

“I believe it was the last FA Cup final to be shown on both BBC and ITV, the two main TV channels at the time, and the whole day was devoted to pre-match entertainment before the big kick-off at 3pm. This was undoubtedly the biggest game of the season in England. It was our Super Bowl, the biggest match you could be in and we knew this might be our one and only chance to win it so we had to take it.”

Sanchez accepts his football career will always be remembered for his Wembley winner against Liverpool, but he cherishes another strike in his decade with the Dons with just as much pride.

“I see the Wembley goal against Liverpool as one of the two best goals of my career. I was fortunate to score the goal that took Wimbledon into the top division of English football against Huddersfield and that means a lot to me.

“The true Wimbledon fans who saw that promotion-winning goal, and there were only about 100 of them them there that day, they are the ones who will cherish that goal, but obviously the Wembley winner is the one I am remembered for.

“For my career to hang on that tag, I’m happy with that.”

Watch The Crazy Gang, part of the BT Sport Films series, on Thursday 11th May at 10pm on BT Sport 2.