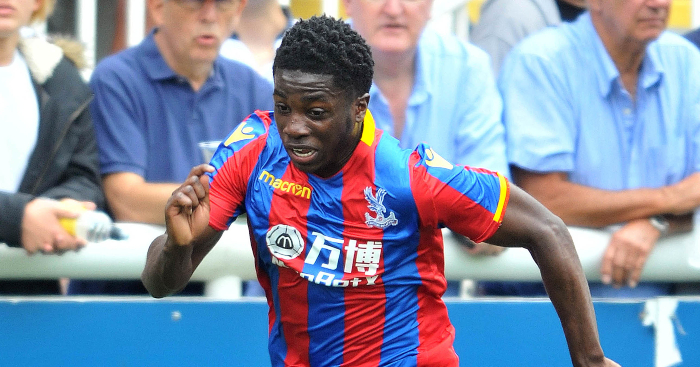 It is said that timing is everything in football. Through no fault of his own, Levi Lumeka couldn’t have timed his Crystal Palace breakthrough much worse.

In September 2017, Frank de Boer handed the young winger his debut as a substitute in place of Lee Chung-yong just after the hour mark at Burnley.

A day later, De Boer was sacked following the 1-0 defeat at Turf Moor, having lost four of his games in charge.

“It was really bad luck for me, with De Boer being fired,” Lumeka says. “After Roy Hodgson came in to replace him, I became frustrated and a bit disappointed about my lack of game time.

“I played for Hodgson once, in the Carabao Cup against Bristol City, but that was it.”

The 21-year-old east Londoner, who was raised in the shadow of West Ham’s Upton Park, is now plying his trade for Varzim SC in Portugal’s second tier, having severed his ties with Palace last summer.

Lumeka had been at Selhurst Park since he was 15 and was one of the standout players with the club’s under-18s team, which prompted a call up to first-team training under  Alan Pardew.

He trained on a number of occasions under Pardew, as well as his successor Sam Allardyce, pitting his wits against local boy Aaron Wan-Bissaka, among others, having scored a copious amount of goals for the under-18s and under-23s.

But his appearance against Burnley was as good as it got for Lumeka, who began his career in Chelsea’s academy. There, his contemporaries included current Chelsea stars Tammy Abraham, Callum Hudson-Odoi and Mason Mount, all of whom he is still in touch with.

He was not offered a contract when he turned 14 and so he headed to south London, where he signed for Palace.

“I had a good goalscoring record at Chelsea, so it was a shock when I was released,” he says. “Declan Rice and Eddie Nketiah were also let go at the same time as me.”

At Palace, Lumeka was under the tutelage of Dave Reddington, who would go on to become first-team coach alongside Hodgson, as well as Richard Shaw and Paddy McCarthy.

His versatility was a bonus, with him regularly playing as a winger and a striker, as well as at right wing-back when Wan-Bissaka was handed his chance in the first team.

Lumeka soon followed him and was confident of cementing his place in the Palace squad.

“I knew I was playing well in training, where I was easily coasting past some of the defenders,” he says.

“I didn’t know I would be travelling with the squad for the Burnley game until the fitness coach came in and told me to bring all my stuff with me. It all happened really quickly.

“During the game De Boer told me to go and warm up, but the one thing I realised is that you don’t go and sit back down after your warm up until the manager tells you to do so!

“Jason Puncheon, in particular, was really encouraging with me when I got on to the pitch and I remember putting some good crosses in for Christian Benteke, so I took a lot of confidence from my performance.”

Unfortunately for him, Hodgson did not share the same view and he did not play for the first team again, apart from a fleeting appearance in a 4-1 loss at Bristol City in the League Cup fourth round.

The fact that he was top goalscorer for the under-23s did not count for much either and so, at the beginning of 2018-19, he joined National League side Leyton Orient on loan.

But that move turned sour, with Lumeka playing just once, as a substitute against Solihull Moors.

“People told me they were surprised I had moved into non-league. No disrespect to Leyton Orient, but I think I should have gone to a club higher up.

“The manager, Justin Edinburgh, told me I would be part of his plans, but I wasn’t selected for the first or second game and I was on the bench for the third match.

“It wasn’t as though I was acting big time or anything. I didn’t understand it, but I have a lot of faith in God so I kept on working hard in training, going past players, doing a lot of running and showing that I was fitter than the rest of them.

“We had a behind-closed-doors game against Barnet and I scored twice, but I still wasn’t being picked – I should have been on the bench, minimum.

“I went back to Palace in the January and my agent was trying to get me another loan, but again it was a lower league club and I did not think it would help my career.

“Even though I had been away, I still ended up being joint-top goalscorer for the under-23s that season.”

Buoyed by advice from team-mate Andros Townsend, Lumeka knuckled down, but he soon realised his time at Palace was going to come to an end.

“I was going to watch Eddie Nketiah play for Arsenal in the Europa League at the Emirates, which gave me more motivation to succeed myself,” Lumeka says. “The only way I could to that was by moving to another club.”

Despite interest from clubs in France and Italy, Lumeka chose to move to northern Portugal, with Varzim, whose manager is former West Ham United loanee Paulo Alves.

“My agent told me that the manager loved wingers with pace and who liked to run into the channels, which is my game,” he says.

“They were building a whole new team and I saw it as an opportunity to showcase my talent on a good platform.”

Lumeka had made 28 appearances and scored nine goals when the Portuguese second division was abandoned in May, having been suspended in March due to the coronavirus pandemic.

Varzim were sixth in the table at the time, just outside the play-off places. Lumeka has another two years left on his contract and is planning on staying in Portugal for the duration.

“The people here are so nice and humble, and they are always so happy – I am learning from them and I try and be happy every day,” he says.

“The football in Portugal is more about technique and I have improved so much when it comes to things like my first touch and my control.”

Lumeka speaks French, thanks to his parents, who hail from the Democratic Republic of Congo, meaning he can converse with the Francophone African players in the Varzim squad.

He is also picking up bits of Portuguese but wants to return to England one day and would also consider a call-up to the DRC national team.

“That is the aim, but I would prefer it to be for Premier League club,” Lumeka says.

“When it comes to the DRC, I would say you never know, but at the moment I am just focusing on my club football and getting ready for next season.”