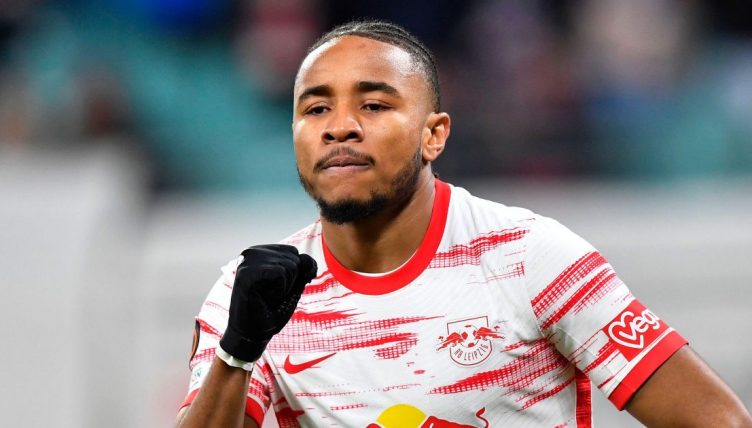 A standout performer for RB Leipzig for a few seasons now, Christopher Nkunku is just what Liverpool need to cope with Sadio Mane’s exit.

France’s UEFA Nations League campaign got off to a shaky start in a 2-1 defeat against Denmark on Friday, June 3. Karim Benzema was the lone goal-scorer for Les Bleus, but Nkunku’s cameo provided the France faithful with much to be positive about.

Benzema’s opening goal came from a well-worked move in the box that included a very clever flick from Nkunku to deceive the Danes in the box. Regular watchers of RB Leipzig have come to expect such brilliance.

The GENIUS that is Karim Benzema on full display again! 🤯

Absolutely outstanding dribbling and finish, set up by a beautiful flick from Nkunku, and France are in front 🇫🇷 pic.twitter.com/5T2zLkmCCu

Indeed, Nkunku scored in Leipzig’s first and last games of their domestic campaign, both coming in the DFB Pokal, which Leipzig won for the first time in their history.

Both goals showed two of Nkunku’s best traits as a goalscorer – his abilities to receive the ball while running in behind and to attack pockets of space in the penalty area with his clever movement.

Then forcing the ball into the back of the net is something he’s been extraordinarily good at this season: 31 goals and 14 assists in all competitions are evidence of just that.

Then again, Sadio Mane scores goals for fun too. The Senegalese forward has reached 10 goals or more every season since 2014. This summer, after 23 goals and five assists in all competitions, he is set to move from Anfield, calling time on an illustrious six-year period at Anfield.

Without a shadow of a doubt, Mane’s departure leaves a huge gap in quality and availability as well. His versatility has served him well over the years and has allowed him to switch between being a wide forward and a central forward.

It is important for Liverpool to find an attacker with not only similar traits but also someone who brings something different to the table which will allow Klopp to find his next great trio.

He already has Luis Diaz and Diogo Jota waiting in the wings; Leipzig star Nkunku should be next.

Why Nkunku catches the eye

Digging deeper beyond the spectacular tally of goals and assists, perhaps Nkunku’s greatest asset is his off-ball movement.

Predominantly a left-sided attacking midfielder, this season Nkunku has been used further forward alongside other strikers such as Youssef Poulsen and Andre Silva. As part of a front two, Nkunku has the freedom to drop off and unsettle defences with his movement between the lines.

With strike partners like Poulsen and Silva providing a focal point in the box, Nkunku has the freedom to drift to the left to deliver dangerous crosses to create opportunities for his team-mates to score.

One classic example of this is from a 3-1 loss to Bayer Leverkusen where he set up Silva for his goal. Leipzig exploited the space behind the Leverkusen defence on the counter-attack and Nkunku found himself in the channel on the left.

He got to the byline before linking up with wingback Angelino to find the head of Silva, who directed the ball into the back of the net.

Nkunku more than makes up for his lack of athleticism with his positioning between the lines and ability to link-up with his team-mates around him.

This is one aspect in which he is quite different from Mane, whereas the Senegal captain is able to use his acceleration to speed away from markers when necessary.

Nkunku is more interactive with his fellow midfielders and attackers, using their off-ball runs to create one-touch passing sequences to attack the opposition penalty area and then position himself in dangerous areas to get shots away.

In earlier seasons, Nkunku was more of a wide attacking midfielder, but under Domenico Tedesco and Jesse Marsch earlier, he has been transformed into a central supporting striker.

The numbers speak for themselves

A quick look at the underlying numbers tells us that both Mane and Nkunku have had very good domestic campaigns resulting in their impressive goal contribution figures.

In the past year, Nkunku’s output in front of goal has grown astronomically and there is an element of overperformance in his numbers for Leipzig. His 0.46 non-penalty expected goals (npxG) per 90 minutes means Nkunku has carved out chances worth nearly a goal every two games.

He has, then, slightly exceeded expectations, scoring at a rate of 0.63 non-penalty goals per 90, according to data from Statsbomb via FBref.

Mane’s impressive output, meanwhile, is down to consistently getting into good shooting positions – he’s averaged high-quality chances on a regular basis for several seasons, managing 0.53 npxG per90 in the Premier League in 2021-22.

Taking a closer look at both of their shot-maps in recent seasons, there is a clear evolution in both cases. 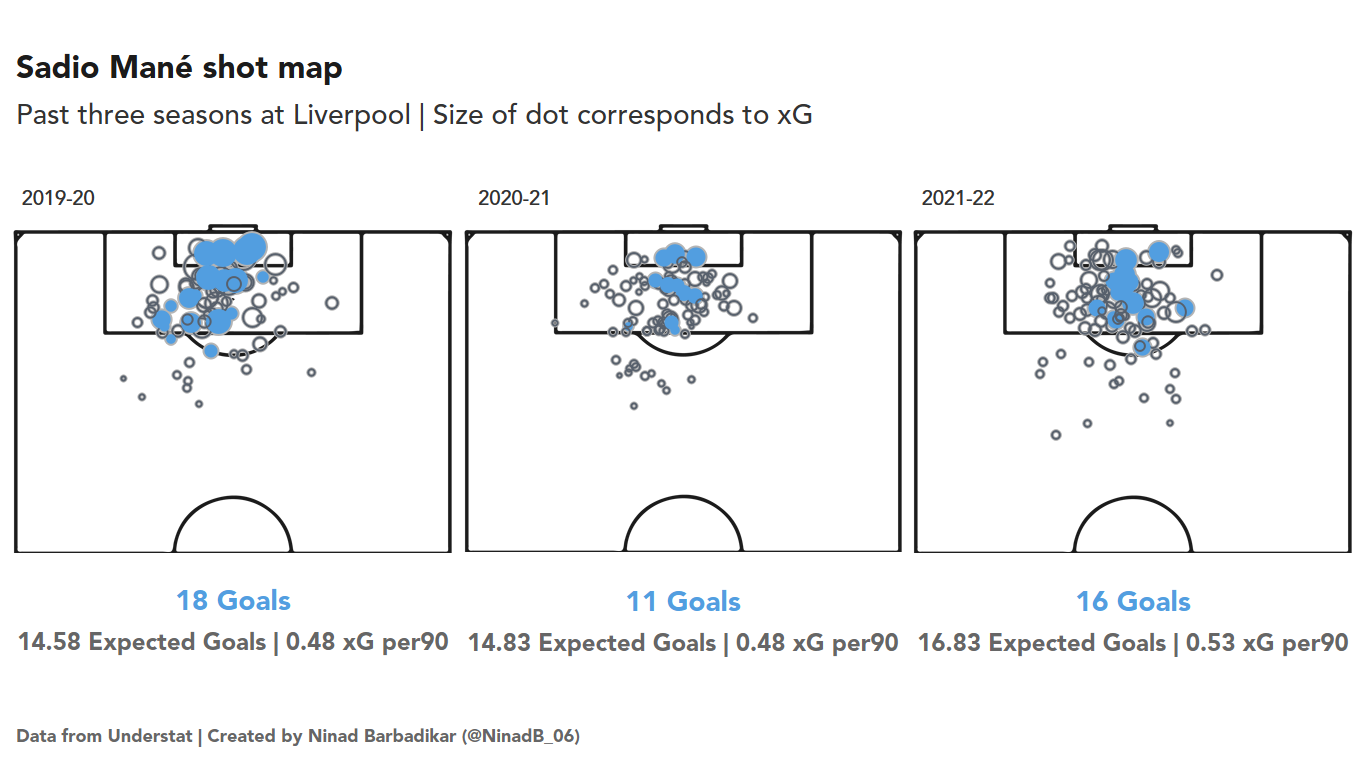 As the graphic suggests, Mane’s goal-scoring positions have gradually evolved from being an explosive winger on the left to a clinical finisher focused on getting more and more shots away centrally and, more importantly, within the width of the goal.

A similar kind of evolution can be observed in Nkunku’s shot tendencies over the past three seasons in the Bundesliga at Leipzig. 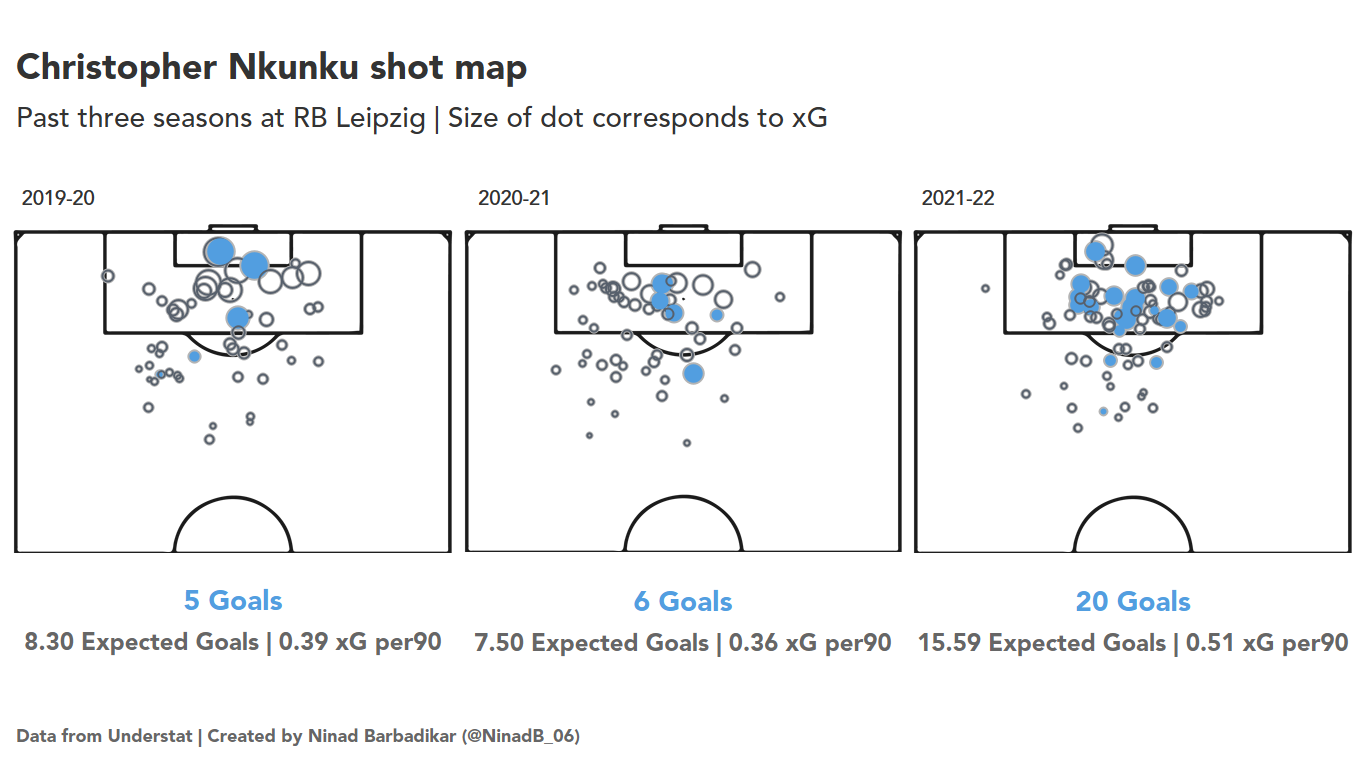 Much like Mane, a lot of Nkunku’s attempts came from the left before his move to a central role this season, which has led to him taking his shots from high-quality positions as evidenced by his shot-map from the 2021-22 season.

With Luis Diaz now providing Klopp with another option to play from the left, he could potentially experiment with Nkunku across all front three positions which is no problem for the PSG academy graduate.

One of the many things that’s both exciting and intriguing is the potential for a signing like Nkunku to lay the groundwork for Klopp’s next great attacking formula, and with players like Diaz and Jota up his sleeve, there is a very high ceiling to what those players could achieve.

And although this is unlikely, if Liverpool wish to play a front two, Nkunku would be perfect for that too given his experience in the past season with the likes of Silva and Poulsen. 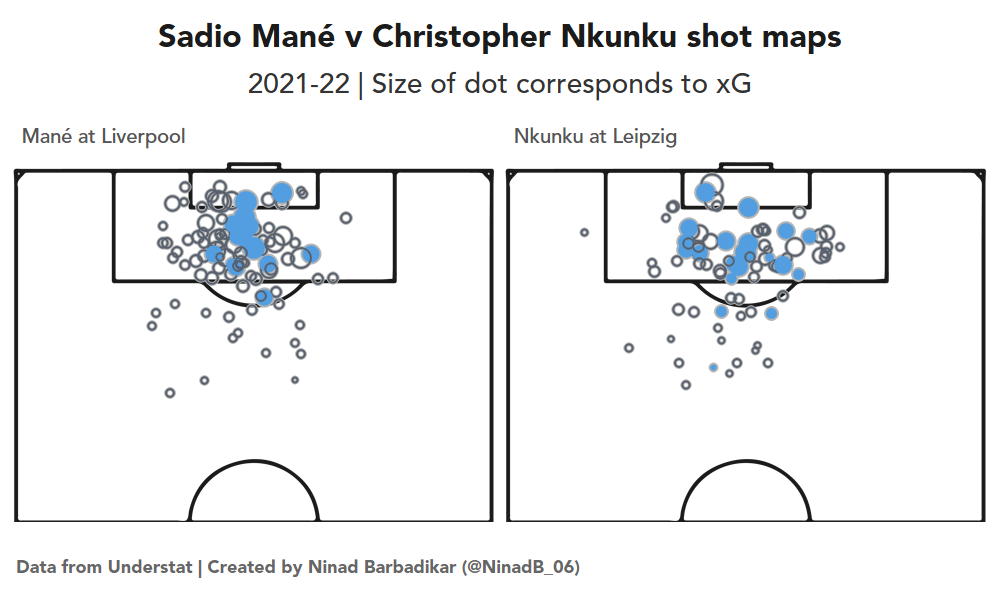 Another exciting quality of Nkunku’s is his dribbling ability and his ability to create chances from ball progression. His exceptional close control makes him a tricky customer to defend against in and around the box. 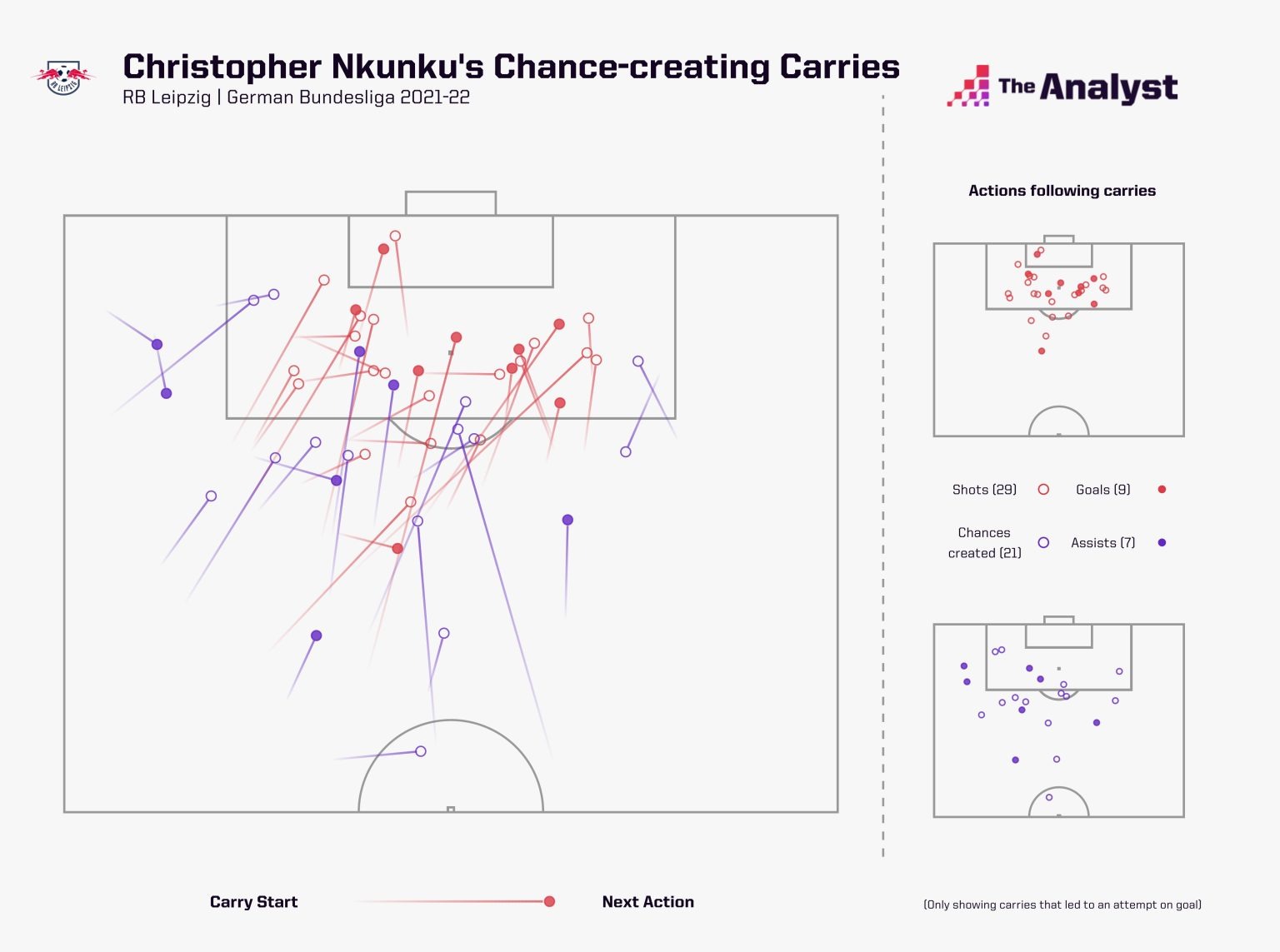 As this graphic from The Analyst suggests, Nkunku’s carries are particularly effective when attempting to penetrate the opposition penalty area either by passing to a team-mate of his or going for goal himself.

A lot of those carries are over shorter distances which is where the Frenchman’s ability to combine with his team-mates is underlined. Playing one-twos around the edge of the area to unsettle defences.

To add further context to this, Nkunku topped the charts for total chance-creating carries in 2021-22 with 50 ahead of the likes of Leroy Sane (44) and Moussa Diaby (42). He also had the most goal-ending carries in the Bundesliga (9), at least three more than everybody else in the league (The Analyst).

And what of his creative talents? Once again, top class. Nkunku was creating chances of very high-quality last season for Leipzig, averaging 0.33 expected assists per 90 in the Bundesliga. 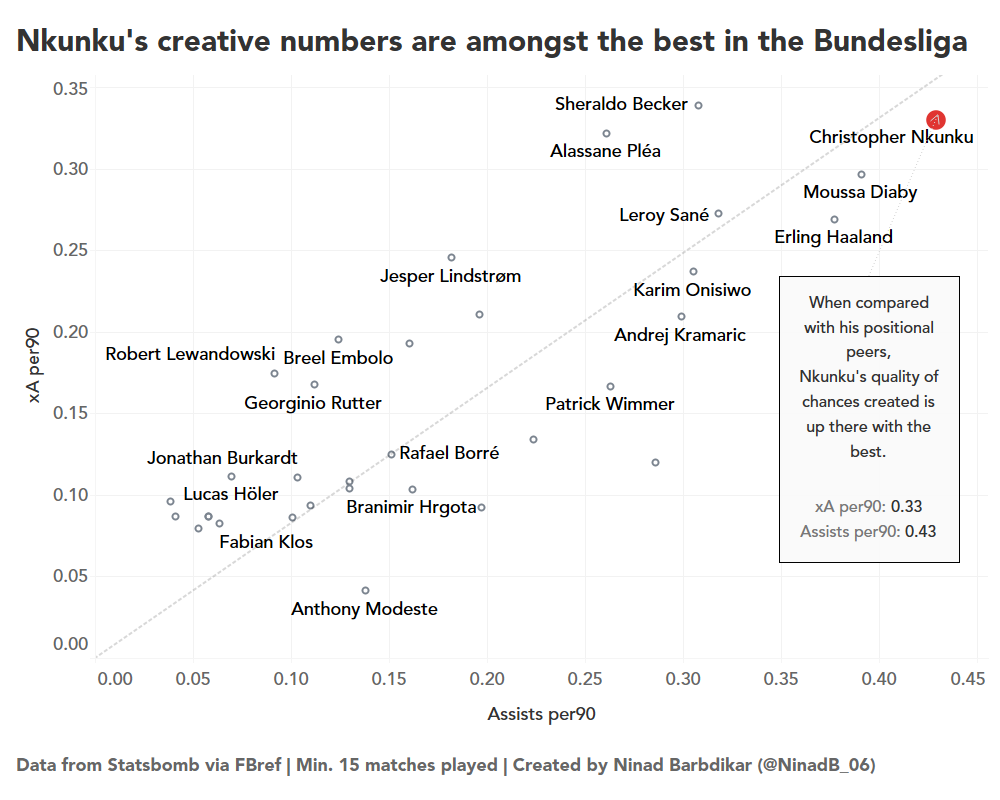 As the above graphic suggests, Nkunku’s overall return of 13 assists is no luck as there is very little overperformance in his underlying numbers. With excellent finishers like Silva around him, among others, Nkunku’s team-mates have taken full advantage of the chances set up by him more often than not.

Averaging 0.43 assists per 90 in the league, Nkunku was assisting a goal every two games in 2021-22, just another indicator of his incredible effectiveness in attacking areas. 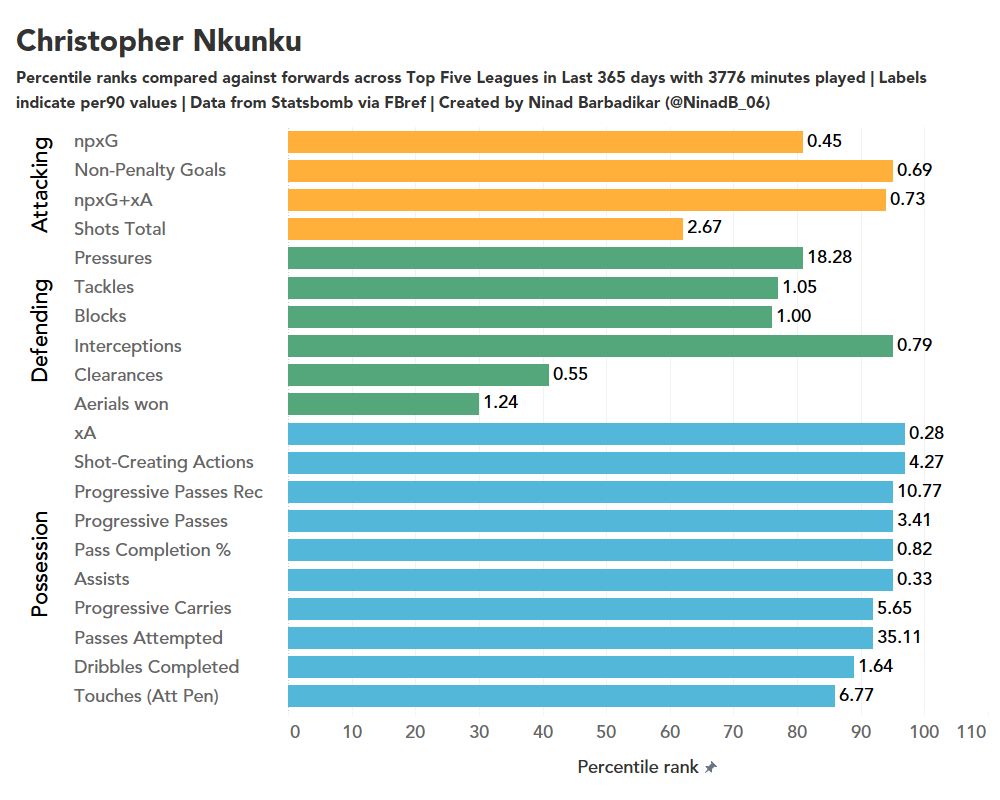 And as if all of his attacking prowess was not enough, Nkunku is a very rounded player as the above graphic suggests. Ranking in the highest percentiles for most metrics across the top five leagues, he leaves no stone unturned in all departments on the pitch.

Liverpool will be wise to act swiftly with Nkunku, just as they did with Diaz in January. Whereas normally their recruitment strategy has been patient and shrewd, the signing of Diaz was a real show of intent and with Mane’s impending departure, Nkunku could be the next big name to grace the Anfield turf.