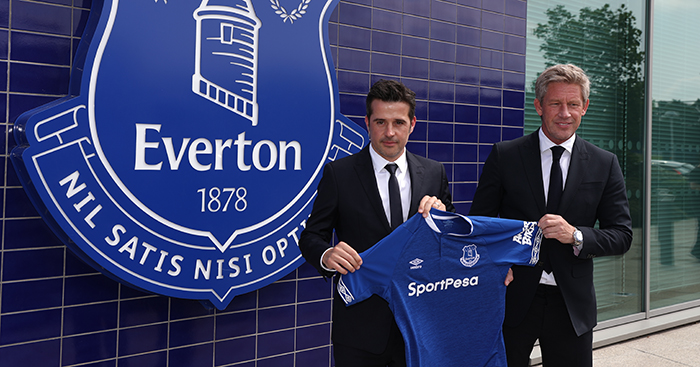 Andre Gomes was announced modestly and with little fanfare. It wasn’t so long ago that new signings seemed to march through Finch Farm on a weekly basis, each one accompanied by a Hollywood-lite vignette, but thankfully that trend seems to have passed.

Alexis Sanchez playing a grand piano on the Old Trafford pitch was too much for hubris even for football and, for now, we’re back to thumbs-up, slogans in broken English, and a few handshakes and smiles.

Gomes is back, back for good, and the tone couldn’t be more different to the summer of Davy Klaasen, Sandro Ramirez and Wayne Rooney.

Mainly because Everton’s scattergun approach to the market is also in retreat. The new Premier League season is now just six weeks away and Gomes is the only outfield player to have arrived at Goodison Park. That new order is different and it’s reassuring.

As entertaining as the transfer market can be, it tends to serve as false indication of progress. Buying good players can bring improvement, of course, but the more a club does during the summer – arguably – the less idea they have of where they’re actually trying to go. Such was the criticism of Steve Walsh, the now departed sporting director.

Walsh was arguably over-promoted by his appointment. He was a scout rather than an executive, and that told in his chaotic recruitment. Instead of serving a central purpose, his signings tended to exist in individual vacuums; in hindsight, his decisions appeared to be judgements based on ability rather than suitability or tactical need.

The broader point, perhaps, is that Walsh was representative of something which has subsequently proven false. He was a guru. He was the kind of super scout who could find an N’Golo Kante or Riyad Mahrez and who, if given more money, could unearth them in even greater supply.

It’s a common mistake. Tottenham made it with Paul Mitchell, Arsenal fell into the same trap with Sven Mislintat and, less recently, Newcastle were exposed by their dependency on Graham Carr.

What each of those episodes proved, albeit in different ways, was that sporting directors are components rather than saviours who, if not properly equipped for a specific job and surrounded by the right, complementary relationships, can actually do more harm than good.

By the time of his arrival in English football, Brands’ sporting director career was approaching its third decade. In spells at Waalwijk, Alkmaar, and PSV Eindhoven, he dealt exclusively within the Eredivisie, where he forged a reputation for heavy focus on scouting and youth development, but also an ability to be effective under financial duress.

For an executive, it’s an interesting environment in which to operate. Dutch football remains at a significant disadvantage to Europe’s biggest leagues, both financially and in terms of prestige. The effect, for any sporting director, is a greater emphasis on subliminal strategy.

An ability to spend money wisely has, of course, been key to Brands’ past success, but perhaps no more integral than his capacity to cultivate an incubating environment in which players – and people – appear to prosper.

Most instructive was his time at PSV, which yielded three domestic titles. When Brands joined the club from AZ, where he had also won the Eredivisie in 2010, his effect was widespread.

His influence can be localised to smart acquisitions (Strootman, Wijnaldum, Lozano) and steady academy graduations (Depay, Locadia, Bergwijn, Labyad), but the broader picture describes a sporting director who understands the importance of ideological alignment and the value of inter-departmental relationships.

In late 2018, the Liverpool Echo ran an interview with Toon Gerbrands, who worked with Brands at AZ and then joined him at PSV in 2014. The substance and dynamics of their working relationships are relatively unimportant; what matters is the harmony Gerbrands references – the existence of a clear objective which ran through the club and, crucially, Brands’ ability to sell that message throughout the organisation.

“Marcel is an expert in scouting and he looked for players between the age of 18-22. Those players would be with us for two or three years and learn an extra language, learn about nutrition, learn to play with different tactics and prepare them for the next stage in their career.”

PSV confirm that Marcel Brands will join Everton. A huge loss as General Manager Toon Gerbrands described the structure that he built at PSV as 'worth it's weight in gold to Voetbal International a few weeks ago. Interesting to see if he had a say in Silva appointment. #efc

Gerbrands’ comment references just a single facet of life at PSV, but it’s still revealing. And relevant to Everton, too, because it exhibits the joined-up thinking which, for much of the past decade – certainly the first three years under Moshiri – they haven’t had.

That was certainly the suspicion during Walsh’s time at the club. His dismissal was self-inflicted, but the extent of failure was likely exacerbated by the disconnect which seemed to exist between him and Koeman.

The latter was certainly complicit in that; it was clear that he viewed the club as a means to achieve employment elsewhere. Regardless, the effect of that dysfunction was the same and, eventually, it led to a wasted season under Sam Allardyce.

Brands referenced this back in April when discussing the importance of permanence at a club and the need to not bounce between different head-coaches and opposing strategies.

“I know that’s not always possible, but the same can happen with analysts, performance people, medical staff. Create a pathway for your talents in the Academy, not only players but staff, and every time don’t bring in 12 new people from outside because all the knowledge is lost.”

It’s a form of wastage and it’s something that Everton have been guilty of for some time – to the detriment of their league position but also local morale.

A lack of direction is antagonistic to fans. The game’s main currency will always be goals, wins and points, but perception is increasingly important, too. When a team is perceived to be on a journey towards something, when they’re being led by coherent ideas, they benefit from an enthusiasm which – within reason – transcends their performance.

Conversely, when that doesn’t exist the opposite is true, which offers a plausible explanation for why, in recent seasons, the atmosphere at Goodison Park has been so fractious.

Now the picture is far healthier. Marco Silva did not begin last season well and it wasn’t really until the new year that Everton showed any real sign of order. But when they did, particularly during that trio of excellent wins against Arsenal, Manchester United and Chelsea, it wasn’t a coincidence that – again – Goodison began to sound as it used to.

Partly, that was about the winning and the act of turning over monied rivals. But it was also to do with momentum. They weren’t just plucky, ground out victories but significant performances of definitive style, which also had more than the suggestion of fertility.

Clubs don’t acquire the image of their sporting director within two years, so it’s much too early to proclaim Brands’ time at Everton as anything substantial. But it’s telling that, even now, after a few sane and logical months, the mood seems to have been so altered.

His true effect won’t be felt for some time, especially since the academy, presumably one of his core focuses, remains under a transfer ban and will be until 2020. But supporters respond to promise and the warm feeling that comes with knowing that a culture is being altered, even if just stitch-by-stitch.

Recognition of that is a positive in itself. Having experienced the boom-bust of guru-culture, the Walsh seasons and the clumsy pivot from Martinez to Koeman, there’s a sense of calm which comes with knowing that a long-term plan exists and that, unlike for much of the past decade, there are no longer serious schisms between the various football departments. From the outside, the steady transfer progress is a symptom of that calm.

Gomes is through the door. Perhaps Kurt Zouma will follow soon. Whatever anyone’s opinions about those players and their respective virtues, they represent the order to this work. There’s traceable logic behind it; weaknesses are being addressed and method is being applied.

The impression, finally, is of a club where the collective interests are aligned and, as Brands’ career attests, that’s generally profitable.