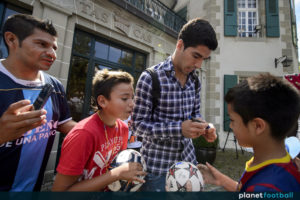 Barcelona’s Uruguayan forward Luis Suarez is surrounded by fans after he pleaded his case before the Court of Arbitration for Sport (CAS) to halve his four-month FIFA ban for biting on August 8, 2014 in Lausanne. Suarez was banned from all football-related activity for four months after biting Italy defender Giorgio Chiellini on the shoulder during a World Cup group game in the Brazilian city of Natal. AFP PHOTO / FABRICE COFFRINI (Photo credit should read FABRICE COFFRINI/AFP/Getty Images)