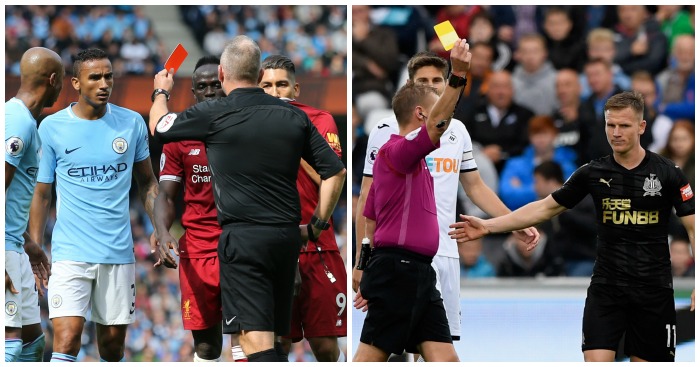 Sadio Mane’s sending-off for Liverpool at the weekend certainly split opinion and once again ignited debates about consistency and whether or not players are being too harshly penalised for many challenges.

Mane was shown a straight red card by referee Jon Moss in Liverpool’s defeat at Manchester City when, attempting to control a high ball, he instead caught home goalkeeper Ederson in the face with his boot.

The forward kept his eyes on the ball at all times – and would have escaped with a booking at worst in times gone by – but former Premier League referees Dermot Gallagher and Keith Hackett are among several ex-officials to have backed Moss’ decision to send him off.

However, as if to highlight just how difficult a call it was for Moss to make, Mark Clattenburg said on Norwegian TV he would have shown only a yellow card for dangerous play had he been in charge of the game at the Etihad Stadium.

If three former referees cannot agree on a decision even after the benefit of seeing several replays, it calls into question how much impact a video assistant referee would have in removing controversy from the game – no matter how much the authorities tweak the Laws of the Game to avoid grey areas, how an offence should be punished will still often come down to a matter of opinion, not fact. 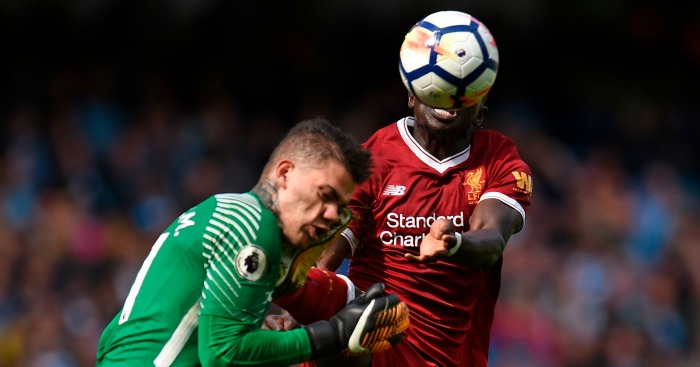 READ: Which Premier League clubs have the best record when reduced to 10 men?

We spoke to Mark Halsey, a Premier League referee between 1999 and 2013, to get his views on the two weekend incidents.

“When I first saw the Mane challenge I thought, ‘Err on the side of caution and show a yellow card.’

“Mane’s looking at the ball, the keeper’s come out of his goal area so isn’t afforded the same protection as when he’s in his goal area, and had Mane not caught him then he wouldn’t have been sent off.

“He gave himself a bit of thinking time, and having seen it again on various replays, you can’t blame Jon Moss for showing the red card.

“Some referees would have shown a caution, but it’s Jon’s opinion that it was serious foul play and endangered the player’s safety, and you can’t criticise him for that.”

A lack of consistency?

With the debate about Mane’s dismissal still raging, Liverpool fans were further incensed come Sunday when Newcastle United midfielder Matt Ritchie was shown only a yellow card for catching Alfie Mawson with his boot in a remarkably similar attempt to play the ball as Mane a day earlier.

Once again, there has been disagreement as to whether referee Mike Jones got his decision right in this instance, but Halsey does not believe the two instances show a lack of consistency.

Instead, he says referees are allowed and expected to interpret the Laws of the Game differently depending on the multitude of factors that are possible within any football game.

“The incidents are totally different,” he says. “The one by Mane was a reckless challenge and endangered a player’s safety, but had Ederson not got caught then Jon Moss would not have sent him off.

“If you look at the Ritchie one, he’s just nicked the arm of the Swansea City player. He’s been cautioned for a reckless challenge.

Matt Ritchie gets a booking for this… 🤔 pic.twitter.com/idAP2FOysB

“Had he connected with his face or caused a serious injury, it would have been a totally different outcome. But how can you send a player off for serious foul play when there’s been no contact or only minimal contact as there was in this case?

“Had Mike Jones sent Ritchie off, he would have been condemned by everybody. His credibility wouldn’t stand up.”

There have, of course, been several other instances of players being punished differently for what are perceived to be similar challenges – we pointed out that players regularly escape even a yellow card for kicking an opponent in the head when attempting an overhead kick – but Halsey insists this is just another example of people searching for black-and-white laws which simply don’t exist in football.

“You could argue that (kicking an opponent in the head attempting an overhead kick) should also be a red card, but the player’s got his back to the play and doesn’t know where the opponent is, whereas Mane knows the goalkeeper’s there.

“You have to judge each incident on its merits, and the two incidents at the weekend were totally different.”