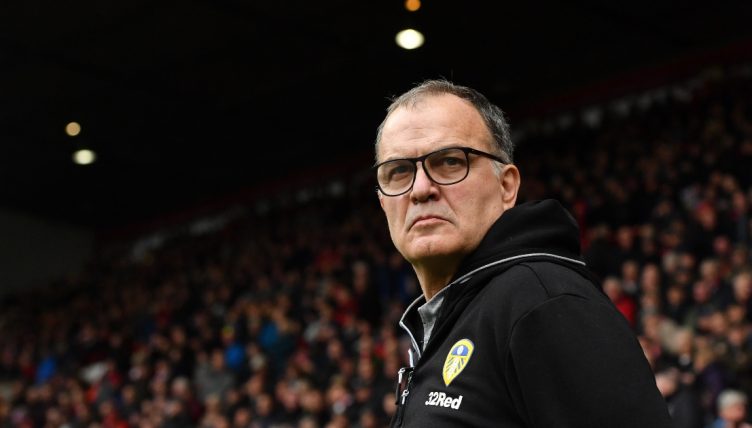 The Marcelo Bielsa era is over at Leeds United, but the legendary Argentinian coach has left behind memories that will last a lifetime.

There are painted murals across Leeds that serve as a testament to the fine work the influential tactician accomplished at Elland Road.

Despite the difficult end, Bielsa remains a beloved figure within the fanbase, for his humility and dedication as much as being the man that ended their long wait to return to the English top flight.

There’s an argument that he ranks only behind title-winners Don Revie and Howard Wilkinson as one of the greatest coaches in the club’s proud century-old history.

Here are 10 matches that define Bielsa’s time in charge of Leeds.

There was palpable excitement at Bielsa’s appointment, but also some trepidation from Leeds fans who had become accustomed to false dawns.

Not knowing quite what to expect when Elland Road hosted recently-relegated Stoke City, who had invested heavily and began the season as favourites for promotion, Leeds produced a display of vintage Bielsaball in the Argentinian’s first competitive match.

The sophistication of the movement and the energy of the pressing was unlike anything any Leeds team in history had ever produced; an emphatic early statement that Bielsa’s tenure was going to be special. It was utterly inconceivable that these were the same players that finished 13th the season before.

“This Leeds pressing isn’t even funny anymore,” BBC live blogger Katie Whyatt – now of The Athletic – wrote that afternoon. “If Mateusz Klich forces Joe Allen any further back he’ll be in 2016 and playing for Liverpool again.”

We couldn’t sum it up better ourselves.

The Whites were suffering their first major wobble midway through the 2018-19 campaign.

A 1-0 defeat at QPR in late February prompted one journalist to ask Marcelo Bielsa whether he was concerned about the dreaded burnout – resulting in the manager shooting him daggers and responding assertively.

“It’s clear that you don’t know what you’re talking about because if there’s something this team doesn’t lack, it’s energy,” Bielsa said.

Talisman Pablo Hernandez scored the first of four goals after just 16 seconds, producing one of loudest roars you’ll ever hear in a football stadium.

Bielsa’s Leeds produced a 3-2 comeback victory in the reverse fixture against Villa earlier in the campaign, and a few days later they scored two injury-time goals to come from behind and beat Blackburn 3-2 in December 2018.

Those wild Christmas games were unforgettable, with the Whites flying high at the top of the table, looking destined for promotion.

Fast forward a few months and the penultimate game of the season against Dean Smith’s Villa was actually inconsequential; Leeds had fallen away and had to settle for a play-off spot, while the visitors’ surge up the table meant they’d also secured a top-six spot. Many saw this league meeting as a Wembley dress rehearsal.

Given there was little on the line, few expected the match to turn out as one of the most memorable games in Championship history thanks to that Mateusz Klich goal – after everyone appeared to have stopped playing due to an injury to Villa forward Jonathan Kodjia – followed by bedlam on the pitch, in the stands, and on the touchlines.

Bielsa bellowed “give them goal!” to his players, who obliged – reluctantly in the case of Pontus Jansson – by allowing the visitors to equalise.

Villa assistant John Terry lobbed abuse at the Argentinian, while FIFA responded by awarding him their Fair Play award.

Bielsa’s Leeds had the better of Lampard’s Derby three times before the Rams came to Elland Road for the second leg of the play-off semi-finals in 2018-19.

Having thrashed Derby 4-1 at Pride Park in the second game of the season, Leeds also comprehensively outplayed them in a 2-0 victory at Elland Road amid the ‘Spygate’ furore in the return fixture, before a 1-0 away victory gave Leeds the advantage for the second leg of the play-offs.

There was a Bombanera-esque atmosphere on a balmy night at Elland Road, with the roof blown off following Stuart Dallas’ opener on the night – a goal that gave Bielsa’s side a two-goal advantage on aggregate shortly before half-time.

What happened next was a total mental collapse. Four goals conceded. Gaetano Berardi losing his head and getting sent off. Tears. Disaster.

Lampard and his players revelled in Leeds’ misery, celebrating on the pitch before leaving a “dubious brown substance” (per The Athletic) in the away dressing room.

Bielsa had yet to commit to a second year and there were fears that would be it. The promotion dream had died in the most brutal fashion. Could that really be it?

Heartbreak in football can go one of two ways; either it can galvanise or deflate. Bielsa signed a new deal at Leeds and it proved to be the former.

An authoritative, statement display that proved Leeds meant business. It was obvious that day that their long-awaited Premier League return was destined.

Not quite the game that clinched it – Emile Smith Rowe’s goal against West Brom and a nail-biting 1-0 win over Barnsley were still to follow – but Hernandez’s 89th-minute winner against his former club was the moment that every Leeds fan knew promotion was in the bag.

The stands at the Liberty Stadium were almost entirely empty – save for director of football Victor Orta and a few other higher-ups going postal – but it was a goal that caused the living rooms of Leeds United fans across the world to shake.

“One other thing to credit Bielsa for is getting us through the pandemic,” tweeted The Square Ball’s Michael Normanton after Bielsa’s exit was confirmed.

“In the most miserable, death-filled, isolated days it was punctuated by some magnificent football and leadership. Literally the only good thing some weeks. It got a lot of us through.”

Look no further than this goal for evidence of that.

😍 "And it comes to Pablo Hernandez…" pic.twitter.com/j12a0kH8xl

A match 16 years in the making, there was no shortage of chatter about what it would mean to have Leeds United back in the Premier League. Not just any Leeds United. Marcelo Bielsa’s Leeds United.

The answer? Pure box office. A seven-goal thriller under the lights at Anfield, away to Jurgen Klopp’s reigning Premier League champions.

“What a game, what an opponent, what a performance from both teams. A proper spectacle, I loved that,” a buzzing Klopp told reporters after the match.

“Leeds are special. They performed outstandingly and it was very difficult – for 95 minutes, by the way.”

A game that set the tone for Bielsa’s side scoring more goals and accruing more points than any newly-promoted side in the past 20 years. The polar opposite of George Graham’s bore draw specialists of 1996-97.

🗓️ #OnThisDay in 2020, Liverpool beat Leeds United 4-3 on the opening day of the @premierleague season.

Leeds fans can have two regrets from Bielsa’s time at the club; how his tenure ended, and never going on a cup run.

Exiting the FA Cup at the third-round stage in each of his four seasons, Bielsa tended to focus on more pressing matters – promotion and survival – and would heavily rotate, often exposing the weaknesses in his small squad.

The worst example of this saw a young Leeds side humbled by League Two outfit Crawley. The Only Way Is Essex’s Mark Wright coming on in the closing stages only added insult to injury.

Given how things subsequently went, it’s easy to have the impression that Bielsa’s Leeds would roll over and have their bellies tickled whenever they came up against the European elite.

But this simply wasn’t true in their first season back. They suffered the odd tonking, as any newly-promoted outfit invariably will, but Leeds also went unbeaten at home to ‘big six’ opposition in 2020-21, conceding just three goals across those six games.

Leeds also came away from the Etihad with a brilliant 2-1 smash-and-grab victory against Pep Guardiola’s Manchester City, a side that was ultimately breezed their way to the Premier League title. The 10-man Whites defended stoutly and got their reward when Dallas scored late on the counter.

“They [Man City] dominated the game, the majority of the chances at goal were in their favour,” Bielsa said after the match.

“But the result was deserved because of the character, personality, effort and fortitude from a mental and physical point of view.

“It is a little bit strange to say it – as it would have been fair for City to win – but we deserved to win.”

With only 10 men it looks like Leeds have won at the Etihad!

There had been little speculation about Bielsa’s job security in the final weeks of his tenure. Yet within minutes of the final whistle of Leeds’ 4-0 defeat at home to Tottenham, journalists tweeted his position was under threat and in all honesty that made sense.

It looked like the end and so it proved to be.

Leeds had shown the previous season that Bielsa’s man-marking system can work if implemented properly, even against better players. But with the spine of the side missing – Liam Cooper, Kalvin Phillips and Patrick Bamford – and confidence seemingly shot, quality opposition players mercilessly exposed the system when it doesn’t work.

The result confirmed that Leeds conceded more goals in a single calendar month than any Premier League side in history. They’ve lost every game to ‘big six’ opposition in 2021-22, shipping 38 goals across those nine games to date.

Spurs’ victory was only lacking an all-too-easy set-piece goal, and one that came via a centre-half strolling through midfield, but it had all the other hallmarks of Bielsa’s latter days – with Harry Kane dropping deep and ripping Leeds to shreds, just as the likes of Bruno Fernandes, Philippe Coutinho, Kevin De Bruyne and Martin Odegaard had done before.