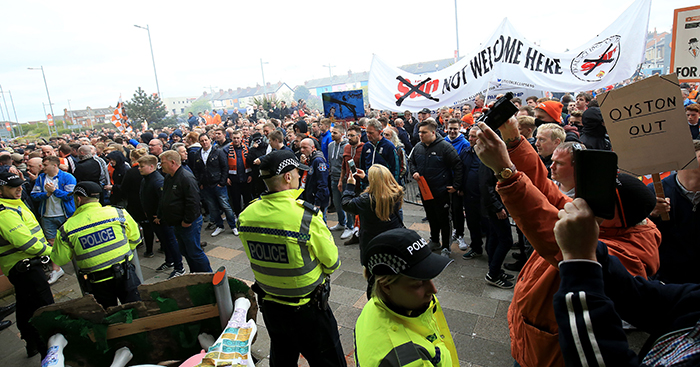 Blackpool secured their place in the League Two play-offs on Saturday – but most of their fans weren’t there to witness it.

In their latest, greatest show of defiance to their club’s owners, Seasiders fans shunned a crucial fixture for their beloved team in favour of protest.

Fans from all across the country joined them on a mass march from Blackpool Pleasure Beach to Bloomfield Road.

There were shirts on display from clubs of all sizes, particularly those who could identify with Blackpool’s situation more than most – Coventry City, Blackburn Rovers and, of course, their opponents on the day, Leyton Orient.

Protest isn’t new to these supporters. In fact, this march was christened ‘Judgement Day Three’, the third and probably not final demonstration against their owners, the Oyston family, organised by supporters’ groups The Tangerine Knights and the Blackpool Supporters Trust.

These two groups have been instrumental in organising protests all season, most significantly in the ‘Not a Penny More’ campaign – a mass boycott of all Blackpool home games.

The Oyston’s crimes against football are manifold, but a chronic lack of investment, and the sneering, at times spiteful, actions against loyal Blackpool fans is what raises Seasiders’ blood pressure most.

“What’s made most people snap is the litigation against the fans,” says one supporter as the crowds start to gather and unfurl banners. “I’ve been going since 1961 and I refuse to go until the Oystons have nothing to do with the club whatsoever.” 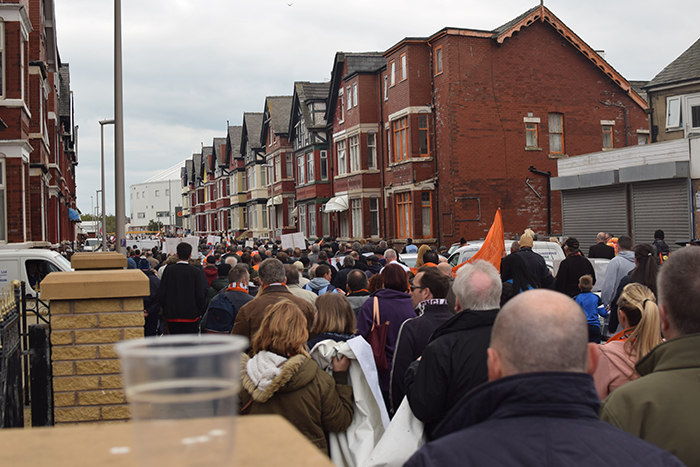 The effect of the boycott has been remarkable, with matchday attendances plummeting and remaining at frighteningly low levels all season long. No businessperson, the fans argue, can continue in charge while their business loses money hand over fist.

On the march, Seasider Paul Summers, who is one of the many who hasn’t been this season, reminds us of the sacrifice he and others are making, but a stand needs to be made.

“I miss the social aspect,” he says. “I had a group of friends I used to see every couple of weeks at Bloomfield Road, and I don’t think I’ve seen them in a year”

“As the seasons went by after the Premier League, the money given to the manager to strengthen the team was less and less and less. Fundamentally, it’s about a lack of investment in the club.

“I was brought up on lower-league football, I’d happily go and watch Blackpool in League Two every single game. But I won’t be going to a club where the owners are looking to undermine the prosperity of the club.”

When Blackpool got to the Premier League, Paul says “you could sense the morale of the town improving.” But in the years since Ian Holloway’s team made a valiant but doomed effort to stay in the top flight, Blackpool flags in shop windows have been replaced by ‘Oyston Out’ scarves – the mood has changed dramatically from optimism to anger.

Once at Bloomfield Road, floats depicting of Owen Oyston and Franseco Becchetti – the almost cartoonish villains in Blackpool and Orient’s stories – were burned in the car park.

The masses congregated in front of the Matthews West Stand, so near and yet so far from their beloved club, and ensured far more noise was made outside the stadium than within. 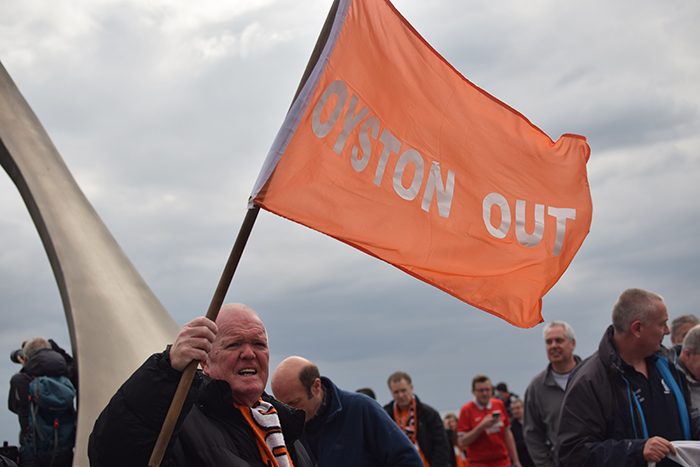 At times, there were hints of tensions boiling over as volleys of abuse were levelled at those who entered the stadium, and a minority of fans attempted to charge past the security in front of the main entrance, but this was by and large a perfectly peaceful protest.

From a lorry in the car park, Spirit of Shankly Committee member Ian Bryne, and Kevin Miles, CEO of the Football Supporters Federation, remind everyone why they’re here. Their message should resonate with every football fan.

“You’ve been an example to football fans up and down the country,” Miles says. “We stand in solidarity with you, as we have with all the other clubs who’ve faced similar battles.

“The fans from Blackburn, from Coventry, from Orient. When you’ve got four, five, six or more clubs facing the same sort of crisis, at war with their own fan base, that’s not careless, that’s a downright disgrace.”

“Collective fan activism works” says Bryne, “Working together as fan groups not as lone voices but as a collective, moves football clubs and moves football authorities. This is the future.” 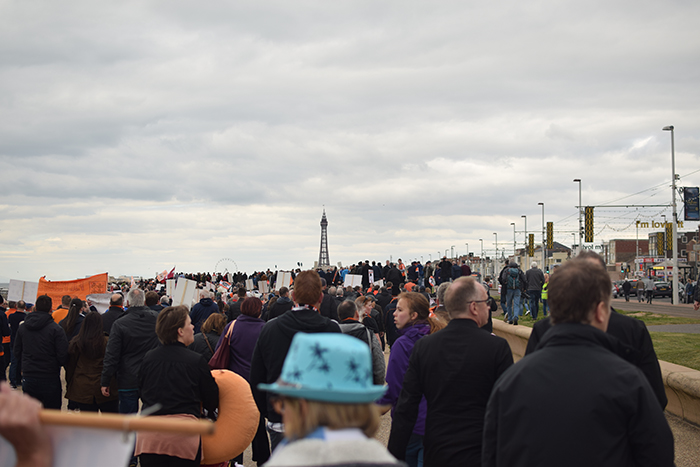 On the pitch, Blackpool’s day is a comfortable one, and while it is heartbreaking for so many of these supporters not to be there, everyone on the march recognises the greater significance of what they’re doing.

Miles says: “Today has been a brilliant demonstration of the resilience of Blackpool fans, continuing their fight in the face of everything that’s been thrown at them, against the parasites that are abusing the ownership of their club, but also the solidarity of fans from other clubs.”

It may turn out to be the case that legal action from Blackpool President Valeri Belokon has more of a say in driving out the Oystons than the masses in the Bloomfield car park, but the hoardes of supporters, many wearing Belokon masks, are in no mood to relent.

Blackpool Supporters Trust Spokesperson Andy Higgins was pleased with the size of the march, which was estimated at nearly 6,000.

“We’re dedicating so much of our time every Saturday giving out leaflets, speaking to people from other clubs, going to other protests,” he says. “We’ve got to do the little we can, and we will win in the end, I’m confident of that.

“We’re more determined than ever and we’re never going to stop.”

At 6.30pm, as Blackpool saw off Leyton Orient, a game takes place between a Blackpool XI and a London XI just down the road at The Mechanics Ground, home of AFC Blackpool.

This game is miles away from Blackpool FC, not geographically but in terms of standard of football, yet it is a stark reminder of what these protesting fans are missing out on. For one mild May evening, they can once again support a team in tangerine called Blackpool.

This was a protest that was about so much more than Blackpool, it was about defying the game’s authorities and money men, who through negligence or malicious action have threatened the existence and well-being of clubs and communities.

If Judgement Day Three helped chip away at their Ivory Towers for just a moment, it will have been worth it.

David Cowlishaw is the co-producer of ‘Who Are Ya?’ a new football podcast looking at a different club every month. The first episode will focus on Blackpool and their fans’ ongoing battle against their owners.