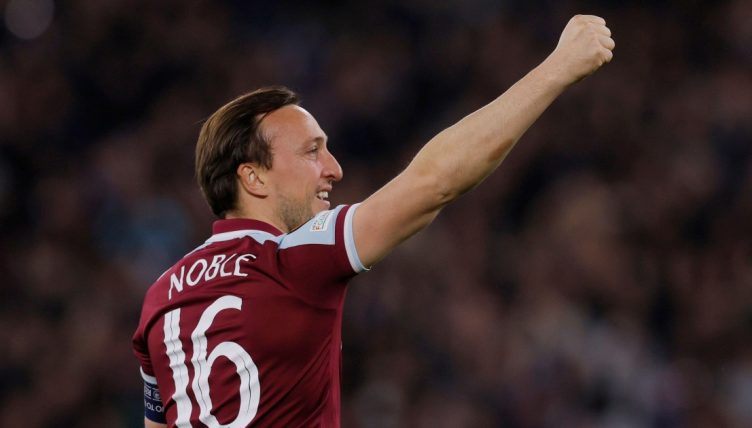 Mark Noble has bid farewell to his adoring West Ham public following his final home appearance during the 2-2 draw with Manchester City in May 2022.

Since his debut during a League Cup game against Southend United in August 2004, Noble has made 549 West Ham appearances during an era where the club have gone from disaster to delight in a heartbeat.

“There were tough times,” he reflected. “But there was no way I was going to walk away. I wasn’t about to give up because, if I had done, I wouldn’t have had the moments I’ve had this year.

“Sometimes it is easy to go, ‘Do you know what, I can’t deal with this anymore and I’m going to go to another club’.

“That is the easy option. I never had that thought in my mind. I was always going to strive to make the football club the best it can be, to drag the players with me, to help the staff here because everybody is affected when the club is not doing well, and thankfully I have done that.

“Not just West Ham fans, but fans around the country and the world, the thing they respect most is loyalty to their club because they have supported it their whole life. And obviously from me they have got that.”

His journey has matched my own as a West Ham fan and I’ve picked out five key memories from the Mark Noble era.

Growing up as a West Ham fan in Bristol during the 2000s was to actively make yourself a target for playground mockery.

With fans of City and Rovers rarer than a magnanimous press conference from Jose Mourinho, my red-club supporting classmates took delight in countless defeats against teams few primary school children have any real conception of like Rotherham, Gillingham and Oldham.

Migrating to secondary school didn’t improve matters. Already standing out due to my stick-thin limbs and almost mute presence in the classroom, West Ham made national headlines for being utter shite during most of the 2006-07 season. Cheers lads.

Relegation looked inevitable by the end of February but Noble represented a chink of light in the gloomy circumstances. Feisty and energetic, the youngster was a shot of adrenaline for a sagging Hammers side.

And his first Premier League goal was a doozy. Winless since Christmas, Noble rifled home a half-volley against Spurs following a deft touch from the Adam’s Apple of Carlos Tevez. He’d score another 54 league goals in claret and blue.

But this wasn’t a joyous occasion. Leading 2-0 at half-time, and 3-2 in injury-time, West Ham collapsed in time-honoured fashion as Spurs pinched an unfathomable 4-3 victory.

Noble walked around the pitch in tears afterwards, unable to process the events of the previous 90 minutes. An hour and a half away, this 11-year-old boy simultaneously wept into his roast dinner.

We’d eventually stay up, Noble playing a pivotal role in one of the Premier League’s greatest escapes, while I’d eventually settle into secondary school life. Neither prospect felt likely on a grey afternoon in the dregs of winter.

Throwback to his first ever Premier League goal vs Tottenham ☄️

It’s the day before my 16th birthday and West Ham have presented me with a birthday cake made of dog turds.

Having narrowly avoided relegation the season before, Gianfranco Zola has been replaced as manager by Avram Grant. Bottom of the league is Grant’s natural habitat; his Portsmouth side finished last in 2010 and West Ham are matching them a year later.

I’m now more used to handling the football-related ribbing that flows in my direction but the fortunes of my beloved Hammers are a source of hurt to this socially-awkward teenager.

Noble has matured into a fine midfielder, blessed with 20 England Under-21 caps, and appears one of the few West Ham players prepared to bust his gut for the cause.

Alas, the 24-year-old is missing from this fateful trip to Wigan. Two goals ahead at half-time, and a miraculous escape from relegation on the cards, Grant’s side tamely surrender as Wigan score three unanswered goals to confirm our fate.

My 2011-equivalent of DMs are quickly filled with mirth. I wear my away shirt under my school uniform the following day, an act of defiance totally uncharacteristic with my teenage years. One classmate even asks me which Premier League team I’ll support now.

But I stick around. And, despite some tentative interest from Fulham, Noble does too. We’re clearly both gluttons for punishment.

As I line up outside my AS-Level English exam, my mind struggles to focus on Sassoon or Shakespeare. I’m going to Wembley in three days’ time and my stomach is already doing somersaults.

Sam Allardyce takes over after relegation, bringing a number of his old Bolton lieutenants and guiding West Ham to the Championship play-off final against Blackpool – a match they’re expected to win comfortably after knocking eight past Ian Holloway’s side in the league.

And it’s Noble that’s crowned the club’s Player of the Season. His poise, commitment and mean penalty-taking record suggest he finds it a personal affront that West Ham are in the second tier.

Having stepped into the breach left by Scott Parker, it’s no wonder he was christened the ‘Canning Town Xavi’ by the Upton Park faithful.

Noble will win the award again in 2014. Only his understated excellence prevents him from winning more, a constant presence that’s often upstaged by West Ham’s latest shiny toy.

But the play-off final does have a happy ending. Despite Blackpool shading it on the day, West Ham score late to earn a 2-1 victory and an instant return to the Premier League.

This remains the only trophy I’ve seen West Ham lift in my lifetime. Go figure.

Our fans bastardise Coldplay, replacing Paradise with ‘Allardyce’, as Noble dances around the Wembley pitch with a claret-and-blue jester hat perched on his head.

You just know he’d have been in the stands had he not become a professional footballer.

📆 On this day seven years ago, West Ham beat Blackpool in the Championship Play-Off final. What a day. ⚒ pic.twitter.com/MpJVEK5Qdj

This was a year of change. As the British public voted to cannibalise themselves, I made my own life-changing decision; having worked at Aldi for three years I decided to bite the bullet and move to Manchester to study History.

It was an impulsive choice to escape drudgery, an unsatisfying relationship and the loneliness of remaining at home while my schoolmates lived their best lives hundreds of miles away.

By coincidence, West Ham were leaving Upton Park around the same time. As a season-ticket holder, I experienced some unforgettable victories over Chelsea, Liverpool and Tottenham in feral atmospheres.

And the final Upton Park night passes in a blur. From drinking in the streets outside the ground beforehand, witnessing the Manchester United coach getting bottled, the last tear-jerking rendition of ‘Bubbles’ and a see-saw 3-2 victory that was worthy of a Hollywood script.

Noble was on the verge of tears afterwards, a one-club man untainted by the mercenary nature of the sport. Somewhere in the Bobby Moore Stand, I just about suppress my own.

There is nothing quite like saying goodbye, after all. 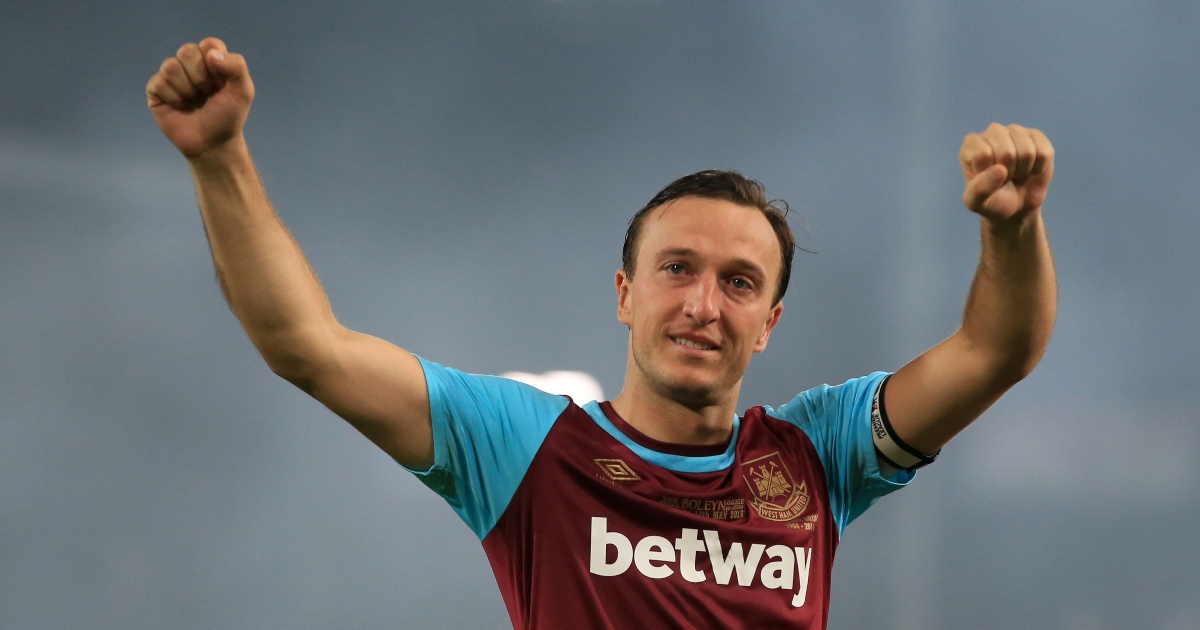 The six intervening years have just about seen everything; elation, frustration, anger, fluctuating hope, love and heartbreak, before a cautiously upwards trajectory to the current day.

But enough about my own life. Throughout the tumultuous bedding-in period at the London Stadium, Noble has remained a sturdy presence as the joint burned around him.

He’s been there during the worst excesses of the Gold and Sullivan years and the current renaissance under David Moyes. Even his haircut has remained admirably steadfast.

While Noble has gradually become a bit-part player in recent seasons, the kid who walked to games from his house in Beckton has lived and died by the team’s results in the same way as the supporters. Which, at a club like West Ham, can become exhausting.

Not this season though. As Moyes’ side have joyously romped across Europe, Noble has been as wide-eyed as the rest of us. From weeping after the emotional victory over Sevilla to the delirious thrashing of Lyon, the captain wore his heart on his sleeve.

Quite simply, Noble has lived and breathed West Ham just as I have. Like all those people to travelled everywhere from Zagreb to Frankfurt do.

He leaves the club in an uncharacteristically healthy position, with more European trips next season on the horizon, and his send-off against Manchester City coincided with a mass onion-chopping in the East End.

He’s certainly done that. And, in doing so, has lived out the dream of every West Ham supporter. Including myself. And including him.