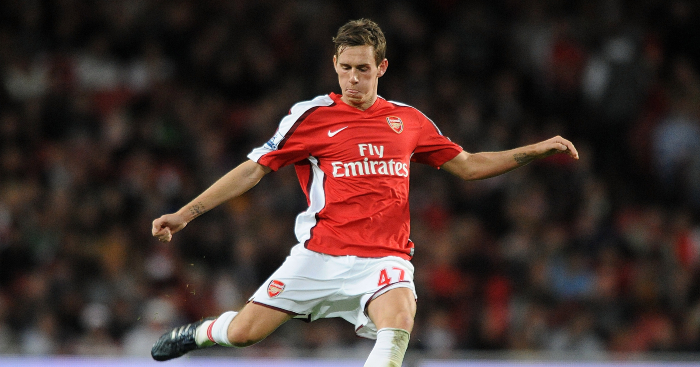 Mark Randall spent 10 years at Arsenal but never received a goodbye from Arsene Wenger when he left the club in the summer of 2011.

It was the Frenchman who gave Randall his debut, and while he learned much from Arsenal’s greatest ever boss, he was saddened by the manner of his departure from the Emirates Stadium.

“I was coming to the end of my contract, so I knew what was going to happen, but I was still gutted when Arsenal told me I would not be getting a new deal,” says Randall, who now plays for Northern Ireland Premiership club Larne.

“I spoke to one of the directors, but I didn’t hear from Arsene Wenger at all, which disappointed me. After all my time there, I thought he would have said something to me.”

But he does not bear any grudge against Wenger – and would not bring up the topic should their paths cross again. “It is one of those things and you have to move on,” he adds.

Hopes were initially high for the midfielder, who made his Arsenal bow during Dennis Bergkamp’s testimonial against Ajax in July 2006, which the Gunners won 2-1 in the first match to be played at the Emirates.

Aged only 16, Randall lined up in the first-half XI alongside the likes of Alexander Hleb and Mathieu Flamini, facing such names as Jaap Stam, Wesley Sneijder and Klaas Jan Huntelaar.

“Ian Wright, Robin van Persie and Cesc Fabregas were also in the squad, so to share a dressing room with those players was unbelievable,” Randall, now 30, recalls. “It was a massive privilege.”

Raised in Milton Keynes, Randall was part of Northampton Town’s academy before being scouted by Arsenal, who he joined in 2001. He steadily rose through the Gunners’ ranks, becoming a regular in the Premier League Reserve League.

Like many Premier League youngsters, he was given his chance in the League Cup, making his competitive debut as a substitute in a 2-0 win over West Brom in October 2006. He appeared in the next round, too, against Everton, in which a late Emmanuel Adebayor goal saw Arsenal progress.

“With the West Brom game, it all happened so quickly,” he says. “I knew I was going to get on because I was told to warm up.

“Arsene wished me good luck and told me what he wanted from me. I was only 17 at the time and when you are that age you have no fear, so I just wanted to go out and impress the manager.”

He didn’t play again that season but did take part in the first team’s pre-season training camp in Austria ahead of the 2007-2008 season.

“I was young, quiet and didn’t say much, but you learn so much training with world-class players. Thierry Henry and Cesc Fabregas were always really good with the youngsters.

“I actually remember one of Fabregas’ first games for the club, a reserve match against Coventry City. We had never seen a player like it – we were all sitting on the touchline looking at each other, saying, ‘Oh my God.’ He was unbelievable.”

Randall made his first start for the club in a League Cup quarter-final win over Blackburn Rovers while also coming off the bench in the first leg of their semi-final with Tottenham. 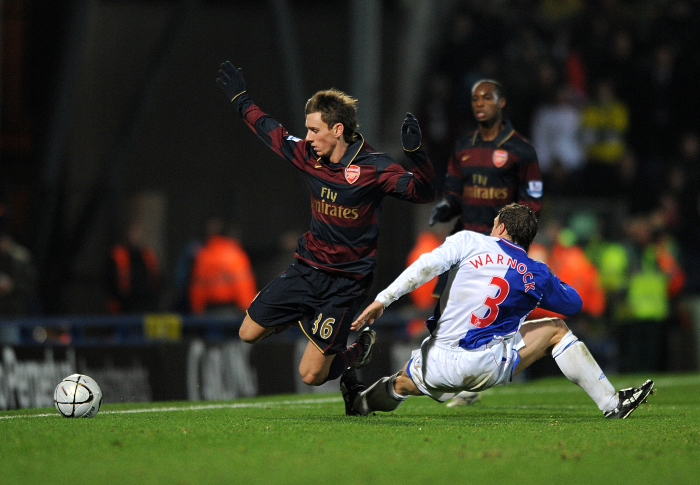 A few weeks later, however, he was loaned to Burnley for the rest of the season, one of three temporary spells he took in, alongside hometown team MK Dons and Rotherham United.

Randall continued to be a fixture in the first-team set-up, playing in various cup competitions and being included in pre-season training camps.

His Premier League debut, against Sunderland in May 2008, saw him double Arsenal’s 1-0 lead, only for the goal to be disallowed for offside.

“It was frustrating because if it had counted, you never know what might have happened,” Randall says. “I think I may have been given more of a chance.

“To be honest, it was always going to be difficult for me with the talent Arsenal brought in from overseas. It might have been easier for me today because you can see a lot of English boys being given their chance in the Premier League.

“Arsene did not say a lot, but when he did you listened. He always gave me good advice and helped me a lot, but I do remember being a nervous wreck before going to his office to see whether he would give me a loan move.”

‘I wasn’t being paid’

After leaving north London, Randall signed for Chesterfield, where he picked up a Football League Trophy medal in 2012. But he left Derbyshire to sign for Italian third-tier side Ascoli in the summer of 2013 in a move he was soon left to regret.

It looked promising for him there, assisting three goals and being named man of the match on his debut. But matters soon turned sour for Ascoli as, months into the season, the club was declared bankrupt.

“I still feel bad about what happened at Chesterfield,” he says.

“The manager, Paul Cook, was contacting me all summer, but my agent told me not to answer the phone because he would find me a new club.

“That didn’t happen and it was one of Chesterfield’s directors who put me in touch with a new agent. He got me the move to Ascoli.

“Nobody spoke any English, so I had to learn a few football terms in Italian. The manager (Massimo Silva) had me in his office, where I watched him move little magnets around his whiteboard, telling me what he wanted me to do on the pitch.

“I really enjoyed it over there – the people were lovely and the food was unreal – but I wasn’t being paid.”

He left the club and returned to the UK, where he received his wages via a cheque in the post a few weeks later.

Randall had spells with MK Dons, who he helped win promotion to the Championship, as well as Barnet, Newport County and Crawley Town. 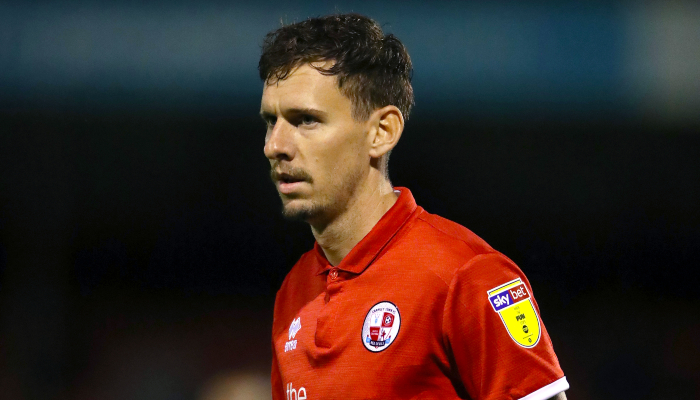 Having become disillusioned with life in England’s lower leagues, a fresh start across the Irish Sea appealed to Randall.

“Warren Feeney, who I played under at Newport, rang me and said the Larne manager (Tiernan Lynch) wanted to invite me over.

“I went there for a week and really enjoyed it – I was surprised at how good the standard was. The club also want to play a passing game, which was another reason I decided to join.”

Randall, his partner and their two children are settled in Larne, which sits on Northern Ireland’s east coast. At 30, he could still be playing at a higher level, but he has no plans to return to England.

“I don’t have any desire to go back. Mentally, I am very happy, which is a big thing for me.

“It is not always about playing at a high level – I could be on more money, but I would not be anywhere near as happy as I am now.

“Larne is a brilliantly-run club, full of good people, and I want to be here for a long time.”

While having no regrets about his career at Arsenal, Randall is reflective about the way it eventually panned out.

“I do think I should have got my head down and focused, especially when I was 20, 21,” he concludes.

“I definitely wish I worked a lot harder because things would have turned out a little better for me.”