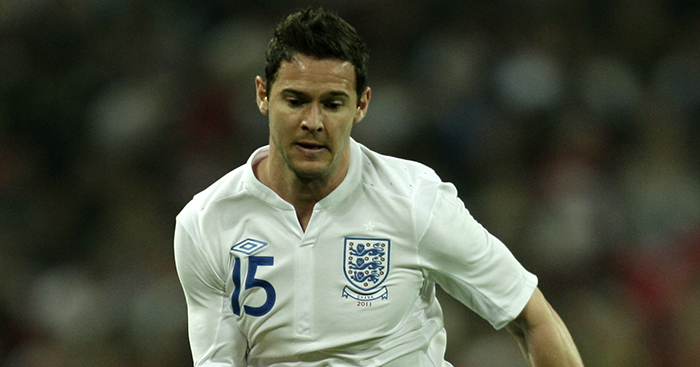 Matt Jarvis only ever played once for England, but the former Wolverhampton Wanderers winger still looks back on those 25 minutes as the “pinnacle” of his career.

Whether or not the perception is fair, there has always been a sense that the England squad is something of a closed shop.

When it comes to selection for the national team, players who feature infrequently for the biggest clubs seem to have an inherent advantage over mainstays at less fashionable sides.

In March 2011, towards the end of the golden generation’s period of dominance, Matt Jarvis was one of those to buck the trend.

A tricky winger, comfortable playing on either the left or the right, he was enjoying an excellent season for Wolverhampton Wanderers. Still, he wasn’t expecting a call-up, and, in time-honoured tradition, assumed it must be a joke when it did arrive.

“I’d driven back to Wolves after seeing my family in Guildford. I’d just got through the door and taken my stuff out the car when I got a text message through saying I’d been selected. I didn’t know whether it was real or not. I couldn’t believe it,” Jarvis recalls.

“Then I got a phone call saying I’d be picked up the next day and what I needed to bring with me. It was just sinking in there and then. I was trying to phone everyone I could possibly get hold of. It was an amazing feeling.” 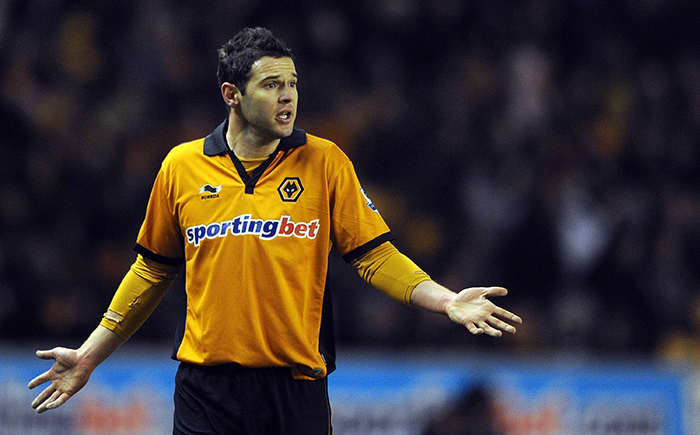 Jarvis’ inclusion was reward for his consistency in trying circumstances, regularly creating chances in a side that often saw much less of the ball than their opponents.

It was seen as a victory for the sort of players who can sometimes feel unjustly overlooked in favour of those on the fringes at more high profile clubs.

“I didn’t think at the time that it was going to happen,” Jarvis says. “I suppose I just thought that being at Wolves, who were in the lower part of the Premier League, I didn’t know if I was going to get the opportunity – but I was absolutely delighted that I did.”

Path to the top

Surrounded by superstars like Wayne Rooney, Frank Lampard and John Terry, the scenic route that Jarvis had taken to the Premier League and the international set-up made his story all the more remarkable.

After being released by Millwall as a teenager, he’d signed for Gillingham and made his debut as a 17-year-old, determined to work his way up the leagues.

He thrived upon playing regular football from an early age and moved to Wolves at the end of his fourth season as a professional.

A key figure in their promotion to the top flight, Jarvis helped them to consolidate. Industrious and an excellent crosser of the ball, he was central to their success under Mick McCarthy. Fabio Capello was soon taking notice.

Heading towards the international break, with a qualifier and a friendly on the horizon for the England manager to assess his options, Jarvis was in particularly good form. Two days before the squad was announced he scored the winning goal against Aston Villa, drilling the ball past Brad Friedel. 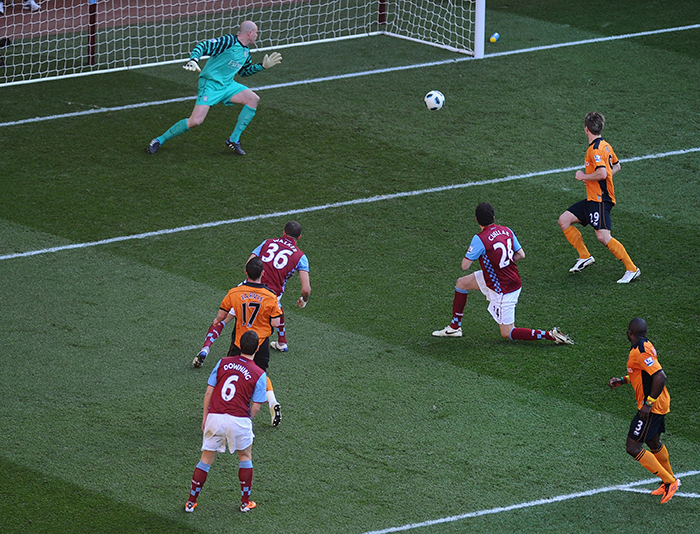 “I think the competition in the wide areas was pretty fierce,” Jarvis says. “You had Theo Walcott, Aaron Lennon, Ashley Young and Stewart Downing. There were more too.

“At the time everyone was playing extremely well, so to even get called up and play with that group of players was a great achievement.”

Jarvis was the only uncapped member of the squad, and most already knew each other from international duty or playing for the same club. More than half of the group were turning out for Manchester City, Tottenham Hotspur or Aston Villa.

Jarvis was the sole representative from Wolverhampton Wanderers, the first player they’d had called up by England since Steve Bull more than 20 years previously.

“I knew all of the lads, but only from playing against them,” says Jarvis. “I didn’t know any of them properly. It was a little bit intimidating, but once you’re there and you’ve had your first training session then you’re just chatting away. 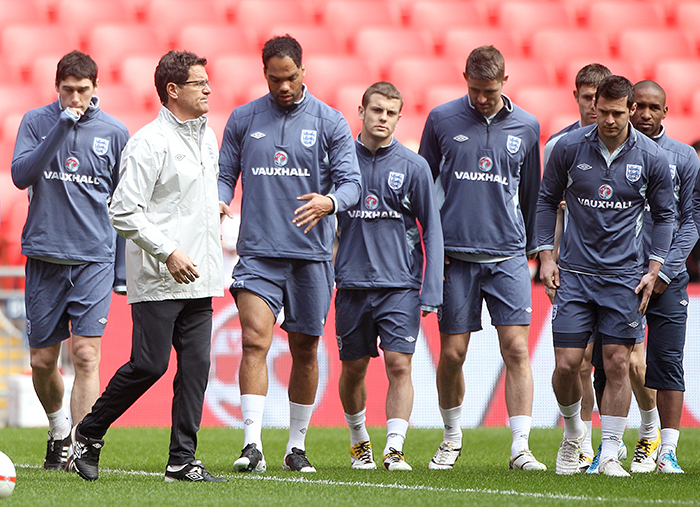 “You’re away for about 10 days and you’re in the hotel all the time so you’re always doing stuff as a group – whether it’s just sitting around playing games or whatever.

“I played a lot of table tennis in the afternoons with Joe Hart, Michael Dawson and Kyle Walker – people like that. But everyone was good. They all joined in with different bits and pieces.”

Adapting to the England environment under Capello, a renowned disciplinarian and quite a different character to Mick McCarthy, was another part of the experience.

“He was great for me, obviously giving me my debut,” says Jarvis. “He had his ways. Everyone knew what they were supposed to be doing.

“The lads were only allowed to go in and have dinner once everyone was there. You then had to wait for everyone to finish before you could leave. He emphasised that everything was about the team rather than individuals, which was good.”

First up for England was a European Championship qualifier against Wales at the Millennium Stadium.

Wayne Rooney and Ashley Young occupied the two wide positions, while Jarvis missed out on a place on the bench to the more experienced Stewart Downing. Young won the penalty for the first and crossed for the second in a comfortable 2-0 win.

Next came the visit of Ghana for a friendly at Wembley. As Capello looked to experiment with his team selection, several players still involved in the Champions League returned to their clubs to recover.

One was sure to leave the camp with some words of encouragement for Jarvis.

“John Terry was the captain, and on the morning of the game he sent me a nice message wishing me good luck and telling me that I deserved to be there,” says Jarvis.

“It was all about enjoying the experience and playing as well as I can. I didn’t know if I was going to play or not, but it was nice to be told a few things like that by your captain.”

Jarvis started off as a substitute, eagerly awaiting his chance to get on the pitch.

Late in the second half, with England leading 1-0 through Andy Carroll’s first international goal, he was summoned over from his warm up and told to get ready. His moment had arrived.

“It suddenly hits you. ‘Wow, right, here we go.’ You get all the butterflies in your stomach. It’s all really exciting and you realise that you’re fulfilling a childhood dream.

“But once you get on the pitch you don’t think about anything else. It’s back to what you’re used to. 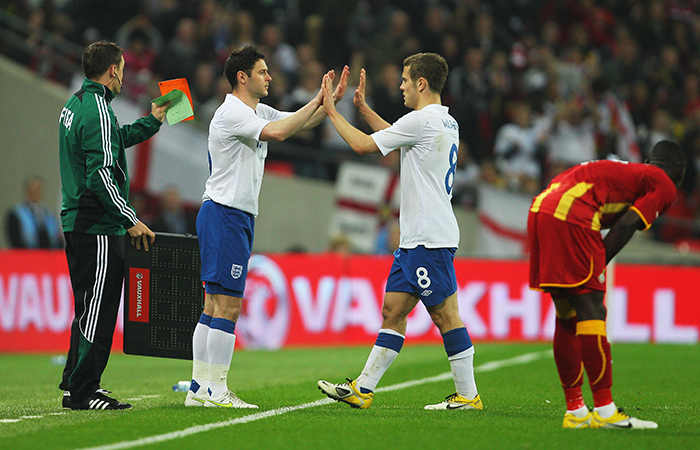 “Once you get over that excitement and anticipation, you’ve just got to play your game. I think I grew into it. I had quite a few touches, made a few runs up the line and put a few crosses in. I enjoyed it. I thought I did OK.”

His international career only lasted for 25 minutes, but it remains a treasured memory for Jarvis. He’s kept several mementoes from that day, including Asamoah Gyan’s shirt, and will always fondly recall playing for his country, particularly considering how hard he had to work to get there.

“The way I did it was different. I wasn’t involved in any of the England youth squads or anything, so to come up from Gillingham to Wolves – all the way through League One, the Championship and then the Premier League – made it that bit more special.

“To play for your country at Wembley is what dreams are made of as a kid. It was amazing. That was the biggest highlight of my career.

“There’s obviously your professional debut, winning promotion, getting to play at the highest level, but that was the pinnacle I think.

“Once you’ve got a taste for it you always want more. I was striving to get more caps so it was disappointing not to do so, but at the same time it’s still a fantastic achievement and one that nobody can take away from me.”