Matt Jones: Gary Speed ‘made me feel a million dollars’ at Leeds United 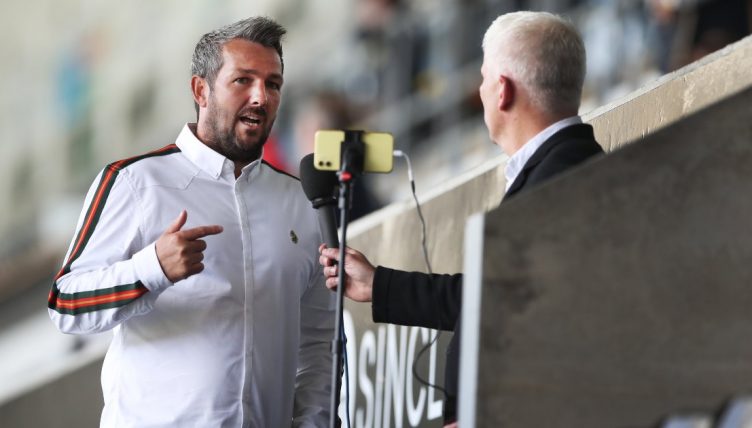 Like many young Welsh footballers, especially one coming through the ranks at Leeds United, Matt Jones was inspired by Gary Speed.

The emotion is evident in Jones’ voice when he talks about the impact that the former Wales international midfielder and manager Speed, who tragically took his own life nine years ago, had on him.

Jones’ career trajectory was similar to Speed’s. Both started their careers at Leeds United, left the club in £3.5million transfers and represented their country.

But the analogies end there, as Llanelli-raised Jones was forced to quit football through injury at the age of 23, nearly four years after swapping Elland road for Leicester City.

Seventeen years later, he is following in his mentor’s footsteps by forging a career in coaching.

“Gary was the first person to greet me when I went to Leeds United when I was 14,” says Jones, who was appointed manager of Wales’ under-18s team in the summer.

“I had gone to see first-team training and he asked if there was anything I needed. He joked I should be playing rugby as I was from Llanelli. Gary went the extra mile and made me feel a million dollars, and I will never forget him.”

Such was their friendship, Jones has embarked on numerous challenges in memory of his former team-mate, taking part in marathons, a 24-hour cycle race, scaling Mount Snowdon and a skydive – all the proceeds of which went to charities that Speed supported.

“I like to turn negatives into positives. Gary was the same; he taught me that.”

From Wales to West Yorkshire

Jones’ talents were spotted at a young age by ex-Leeds goalkeeper Glan Letheren, who was also raised in Llanelli. Letheren recommended him to the Yorkshire club, and he soon joined their academy.

“We only lived a stone’s throw away from travellers and that was an experience that really toughened me up as a young boy because I was involved in a lot of physical battles,” says Jones, a childhood Tottenham fan. “It was an interesting upbringing, but I always had my mum and dad, and my other family members.

“I was on trial at Chelsea one weekend and then Liverpool the next. I went abroad for the first time when I was 14 when I represented Wales in Luxembourg. My parents had never even been on a plane, so I was always conscious of not wasting the opportunities I was given.”

Aged 14, he left South Wales for Yorkshire, where his coaches included Eddie Gray and Paul Hart. Among his contemporaries were future Leeds stars Harry Kewell, Alan Smith, Paul Robinson, Jonathan Woodgate and Ian Harte, and he was part of the team that won the 1997 FA Youth Cup and the 1998 Pontins League.

“From a young age, I knew about the amount of work and dedication that was involved in trying to make it as a professional footballer. What I learned, and something I try and instil in young players I have worked with, was to be resilient.

“Paul Hart and Eddie Gray also took me under their wing and they looked after me. Having those types of people to lean on really helped me.”

Having impressed Leeds manager David O’Leary and his coaching staff, Jones was handed his first-team debut in January 1999 as a half-time substitute for Danny Granville in a 5-1 FA Cup win at Portsmouth.

The following week, he was handed a first start against Aston Villa and provided the assist for Jimmy Floyd Hasselbaink‘s winner in a 2-1 victory.

Altogether, the midfielder made nine appearances that season and began to cement himself in the first-team squad the following campaign.

He made 18 appearances and, despite the fact that David Batty, Eirik Bakke and Lee Bowyer were ahead of him in Leeds’ midfield, O’Leary called upon Jones to man-mark Francesco Totti during the first leg of their UEFA Cup fourth-round tie at Roma. They held the Serie A giants to a 0-0 draw before beating them 1-0 in the return leg at Elland Road.

“I was naive in terms of experience and was up against a player in Totti who was at the peak of his game. He was an unbelievable player, but I was surrounded by excellent and experienced players, and to be given that responsibility felt like a big achievement.

“I knew then that the manager trusted me, as did Mark Hughes when he picked me to play for Wales against Brazil and Portugal at the end of that season, even though I was so young.” 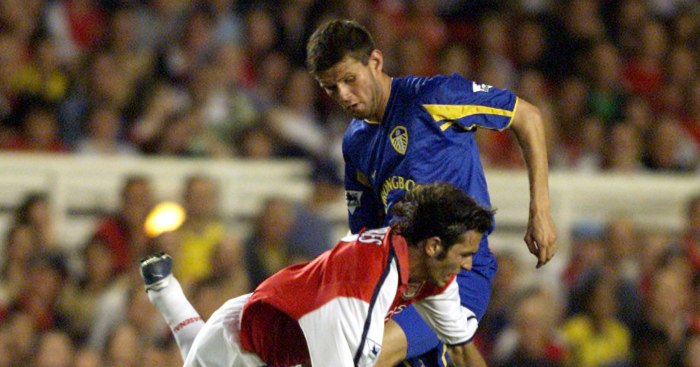 But just as Jones was settling into the first-team picture at Leeds, he was pushed further down the pecking order by the arrival of French midfielder Olivier Dacourt from Lens in the summer of 2000. Come December, he was sold to Leicester.

“I was out of the first-team picture and the chairman told me that a number of clubs were interested in me, particularly Leicester, Blackburn Rovers and Charlton Athletic.

“I had to take the positives from leaving because, even though I’d played in the Premier League and Champions League, I was still on the fringes, so it was a chance to establish myself.

“Leicester and their manager, Peter Taylor, made me feel really welcome as soon as I went down there and I knew I would be playing 30, 40 games per season.” 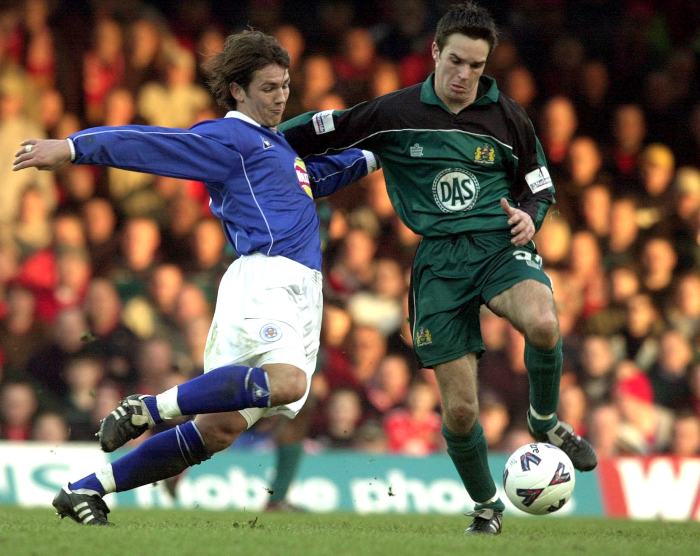 The Foxes were going through a transitional period, having seen manager Martin O’Neill leave for Celtic after five hugely-successful years in the East Midlands.

Neil Lennon followed O’Neill to Glasgow, meaning many Leicester fans saw Jones as a direct replacement for the Northern Irishman.

Involved in both goals in a 2-1 win over Charlton on his Leicester debut, Jones helped his new team to the dizzying heights of fourth, only for the Foxes to plummet down the table and finish 13th.

Taylor was sacked at the beginning of the 2001-2002 campaign, with Dave Bassett appointed as his successor. But Jones’ season came to a premature end at Liverpool in January when he went in for a tackle on another former Leeds midfielder, Gary McAllister, and ruptured his cruciate.

“Up to that point, I had not been prone to injuries, so that was the first major one – and the first of many.”

Ruled out for a year, Leicester were relegated in his absence and Micky Adams had taken over from Bassett by the time he returned.

“It was a long, long process and I didn’t want to give up, even when I had surgeons telling me that I wouldn’t play football again,” Jones says.

“I just used it as motivation, as in I was going to prove them wrong. I was determined that, when I did return, I was going to be fitter and stronger than ever.”

In a bid to gain match fitness, he signed on loan for Nottingham Forest ahead of the 2003-2004 season, only to suffer more an even more worrying injury.

Taking part in a friendly against Ajax at the City Ground, Jones went in for a tackle and felt his back cave in. He was told he had two prolapsed discs in his spine and could be left requiring a wheelchair, unable to walk.

“I had the two discs removed and tried to remain positive, but I was in agony and I knew I wasn’t going to play professional football again,” says Jones, who won 13 caps for his country. “Everyone at Leicester was fantastic with me, though, especially the physiotherapists and the supporters.”

Adjusting to life after football, Jones started to work as a co-commentator on BBC Radio Leicester.

“There was one Saturday after I had commentated on a Leicester game and I was leaving the stadium; a woman approached me and told me that her husband couldn’t come to the games, but that I really lifted his spirits when he listened to me on the radio.

“I had felt like a failure but realised that through my work on the radio I was actually providing a service for some people.”

Jones has since carved out a media career. While he may not be able to replicate the buzz of playing, it has provided some exciting moments over the years, none more so than when he was commentating for Leeds’ in-house channel LUTV in July.

Co-commentating on Leeds’ crucial trip to Swansea City, Jones’ celebrations in the press box could be heard loud and clear when Pablo Hernandez scored a last-minute winner to virtually seal the Peacocks’ promotion back to the Premier League after a 16-year exile.

“It is hard to refrain from that kind of passion, especially when one of my former clubs is involved,” Jones laughs. “That is when the love comes out.”

Aside from his media duties, Jones also coached youngsters at Leicester and then spent five years at Swansea as an academy coach before he was appointed Under-18s boss by the Welsh Football Association as part of a reshuffle among its youth coaches.

“The under-18s is a new age-grade side and to be given a chance like this is fantastic,” says Jones, a father of four.

“I’m still getting to grips with the job and building relationships with a squad of new players, which I’m obviously having to do through Zoom and phone calls at the moment.

“I think that one of the things I am good at is an attention to detail and getting to know young players, understanding their strengths and weaknesses, and what I can do help them. That’s what I enjoy doing.

“I want to become a better coach while, at the same time, developing better football players.”

Twenty-six years on from their first meeting, Gary Speed would certainly have been proud of the wide-eyed boy from Llanelli today.

This interview was originally published in December 2020.