Matt Kilgallon: Dennis Wise didn’t take a shine to anyone at Leeds 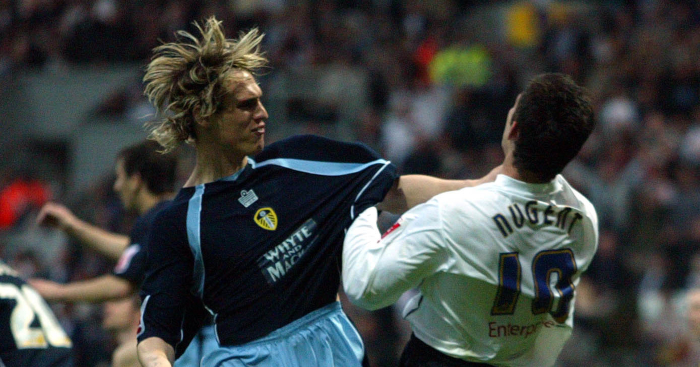 Matt Kilgallon lived the dream, playing for his beloved Leeds United. He had a stellar career with Sunderland, Sheffield United, Blackburn Rovers and Bradford City, too. But he won’t forget the day he left Leeds, his childhood club, who he joined when he was 12.

Leeds were relegated at the end of the 2003-2004 season, after years of chaotic mismanagement and chronic instability.

Managers and players came and went, and there was no sense of semblance until Kevin Blackwell took charge and led the club to the Championship play-off final in May 2006 at Cardiff’s Millennium Stadium, where they were beaten 3-0 by Watford.

By September of the following season, Blackwell was sacked and eventually replaced by Dennis Wise, a combustible character who fell out with his players left, right and centre – including defender Kilgallon, who was sold to Sheffield United in the January transfer window.

“Dennis Wise tried to turn the club upside down,” Kilgallon says. “He didn’t take a shine to me or anyone, even to legends like Gary Kelly.

“He didn’t play me and it was not a good time. I just don’t think he liked me; I don’t know why, but I just wasn’t his cup of tea.

“There were too many loan signings, there was never a settled 11, and I felt that there were people being picked ahead of me who were not half as good. It was hard to take.”

Kilgallon left Leeds on January 8, 2007 – his 23rd birthday – heading across Yorkshire to join Sheffield United, who were then battling relegation from the Premier League.

“All I had known was Leeds United,” he says. “I knew everyone at the club, all the staff, everybody, so it was hard to leave.

“I remember collecting my boots from the boot room, looking around and thinking, ‘This will be the last time I ever come in here.'”

York-born Kilgallon’s journey to Leeds began at a young age thanks to the help of his father. He was part of York City’s academy, where he played as a striker, before his dad took him to Thorp Arch, Leeds’ training ground, to watch a game.

It was there that his dad spoke to one of the club’s youth coaches and told him that his son would become a good player. Kilgallon was invited on trial and was taken on by the Whites, who converted him to a centre-half.

He moved into a hostel at Thorp Arch, where his coaches included Roy Aitken, Warren Joyce and Eddie Gray, and where he counted Frazer Richardson and James Milner among his contemporaries.

“Those were the days of Leeds being in the Champions League and the youth lads would act as ball boys during the big games at Elland Road against the likes of Valencia, Real Madrid and AC Milan,” Kilgallon says.

“I was also one of the kids who helped to hold the flag up while the Champions League anthem was played. I remember the night before the Real Madrid game, we watched them train at Elland Road and Roberto Carlos was practising his free-kicks.

“He hit one so hard that it snapped one of the seats behind the goal, so we picked up the seat and got him to sign it.”

In September 2002, he was told that he would be training with the first team, who were then managed by Terry Venables, ahead of a UEFA Cup tie with Metalurh Zaporizhya in Ukraine.

“Eddie Gray tapped me on the shoulder and said to me, ‘You’re with the first team this morning. Be out for 10 am and don’t be late.’

“Some of the first-team players already knew the younger lads’ names because we used to go in the dressing room and help tidy it up.

“It’s different these days at most training grounds, where the younger lads will be in a different part of the building to the first team.”

He made his debut two months later, in another UEFA Cup tie, this time with Israeli club Hapoel Tel Aviv. The game was held in Florence, Italy, due to rising tensions in the Middle East.

Kilgallon replaced Lucas Radebe off the bench as Alan Smith scored four times in a 4-1 win.

“I just thought I was going along as part of the travelling party,” he says. “The next thing I knew, I was named a substitute.

“I realised that I was the only centre-half on the bench, so I was watching Lucas and Dubes (Michael Dubbery) the whole time, in case one of them was injured.

“I think Lucas was actually struggling with an injury, so Terry Venables sent me on in the 60th minute. We scored a few minutes after I came on, which really settled me down.”

He played twice more that season – by which time Peter Reid had succeeded Venables – replacing Dominic Matteo a 1-0 win against West Ham United, and then again as a substitute for Matteo in a 3-1 victory over Aston Villa on the final day of the 2002-2003 campaign.

“I was in a shop buying some food when I got the call, so I ditched everything, jumped in my Ford Puma and drove south,” Kilgallon laughs.

“This was in the days before sat nav, so I had no idea where I was going and I still I have no clue how I reached the hotel to meet with the manager, Glenn Roeder.”

He played four times for the Hammers, including in a London derby with Tottenham Hotspur at White Hart Lane in the League Cup.

“I was only 18, but the club treated me like I was 28 – I loved it there. There were guys like Rob Lee, David James and Don Hutchison, proper footballing men who all made me feel welcome.

“Living in London on my own at such a young age was brilliant because it made me grow up a bit.”

Alan Pardew soon replaced Roeder and wanted to keep Kilgallon at the club, but Eddie Gray, who had taken over from Reid in November 2003, wanted him back.

Gray gave him his first start in a Leeds shirt in a Boxing Day clash with Aston Villa, and the centre-back scored his first goal for the club away at Southampton the following month.

Leeds were relegated from the Premier League at the end of the season, with Blackwell arriving to take charge of the club’s first second-tier campaign in 14 years.

“To be relegated was devastating as a supporter, but from a selfish point of view, it meant the younger players like me were given a chance.

“Kevin brought in lads like Paul Butler, Sean Gregan and Clarke Carlisle, who were all immensely experienced defenders.

“They were a big help to me, even if it meant I had to play at left-back at times! It wasn’t my favourite position, but I wasn’t not going to play there because I was playing for Leeds United.”

He was a regular starter as the club finished 14th in the Championship and became a fixture in the first team the season afterwards, 2005-2006, when Leeds reached the play-off final.

But the day was a disaster, with Leeds putting in an abject display as Watford secured promotion to the Premier League. 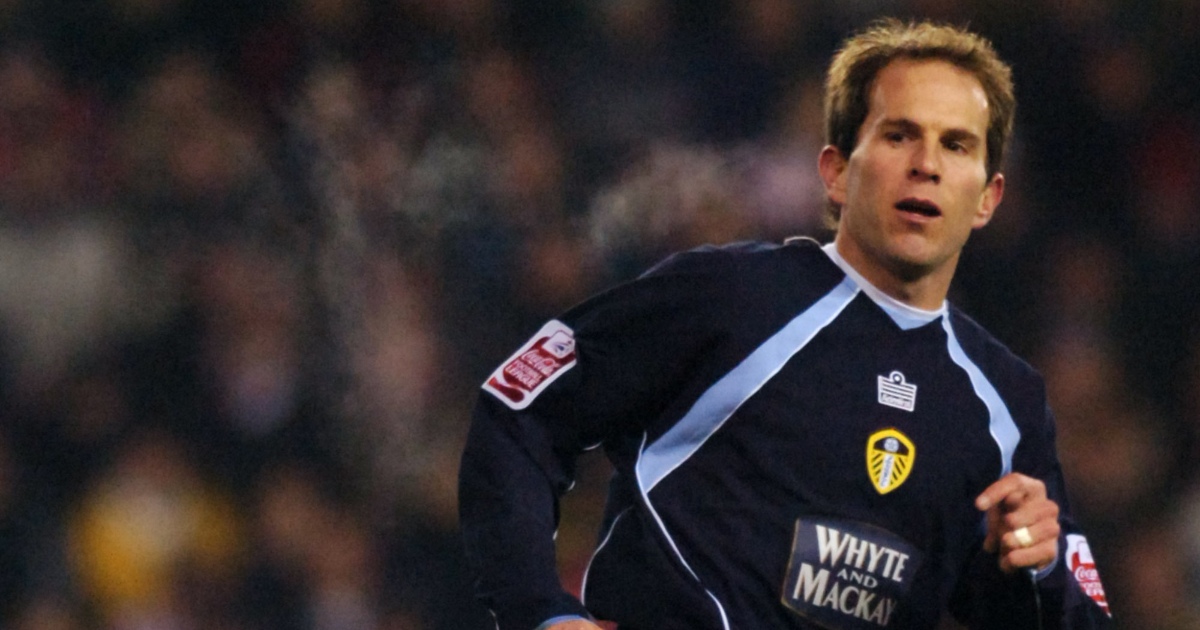 READ: Eddie Lewis: ‘Leeds was the first club I felt I was part of something big’

“Stephen Crainey had been sent off in the semi-final against Preston, so I started the final at left-back,” Kilgallon says.

“Paul Butler was brilliant all season, but he’d been out for weeks with a torn calf and only trained for a few days before the game.

“I watched it the other day on the telly and I’d forgotten that we almost scored around 10 minutes into the game.

“The goals we conceded were poor ones – someone lost their man and then there was one where the ball stumbled off the post, hits Sully (Neil Sullivan) and goes in.

“It was really gutting and nobody said a word on the bus for the four-hour journey home.

“The Championship is a great league, but it’s not the Premier League, and we knew we were in for another massive slog the next season.”

Things went from bad to worse when Wise replaced Blackwell in October 2006.

The former Chelsea man brought in a number of loanees and free transfers on short-term deals, but it did not work and the club dropped down to League One, by which time Kilgallon had left for Sheffield United in a £1.75million deal.

“Reading and a few other clubs were interested, but I had another year left on my contract and I didn’t want to leave,” he says, echoing a similar story to us by Simon Walton in 2017.

“I wasn’t playing well at the time, but then neither was the whole team. Normally, I would maybe have one bad game in 10, but because of the atmosphere around the squad, I would play two good games and then have two bad ones.”

He still attends Leeds games with his son, Bobby, where some staff remain from his days at Elland Road.

“Leeds fans aren’t stupid – they knew the reasons why I had to leave,” he says. “I was never going to be one banging on the manager’s door, asking to leave. The supporters know that.”

He enjoyed his time at Bramall Lane, despite the Blades being relegated from the Premier League a few months after his January arrival.

Awarded the club’s Player of the Year for 2008-2009, he suffered more heartbreak in a Championship play-off final when United lost 1-0 to Burnley. 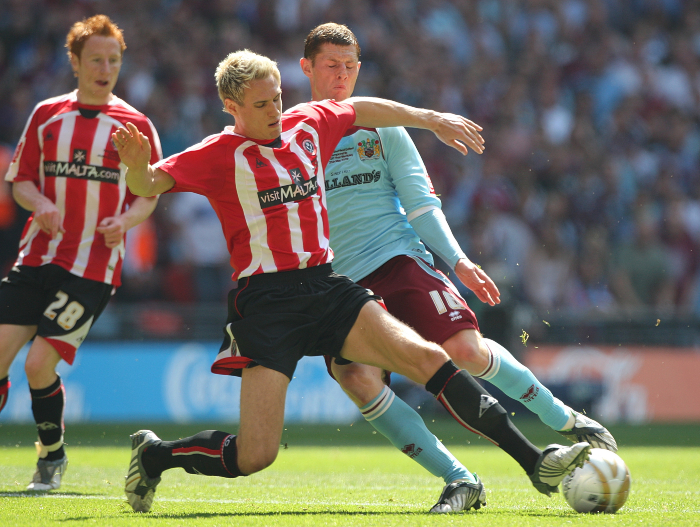 He left for Sunderland in January 2010, a move which did not work out for him.

“Sunderland has a huge fan base and Steve Bruce, who was the manager, had been a top centre-half, so I thought it was a great move for me,” says Kilgallon, who took in loan spells at Middlesbrough and Doncaster Rovers during his time on Wearside.

“We didn’t not get along, I just think he didn’t fancy me. In the end, I found myself so far down the pecking order there was no way back. It was a shame.”

He enjoyed better times at Blackburn Rovers, where he spent three years, and then two years at Bradford City, where he was named Player of the Year in his final season.

“I loved working under Stuart McCall, he was brilliant and funny, but you knew when he was angry and where you stood with him, which worked for me.

“Stuart was sacked when we were in sixth place in the league, which was ridiculous. The chairman also did not like anyone who had been close to Stuart.”

‘I was good enough to play more’

A season in the Scottish Premiership with Hamilton Academical followed before he spent six months Hyderabad FC, in the Indian Super League.

He is not officially retired, but is unsure as to what his next career step will be.

“Sometimes I think to myself I want to bow out when I decide to, but the situation being as it is at the moment, with football shut down, I’ve obviously not received any offers.

“I’ve done some media work, as well, so I need to look at those opportunities.”

If he has one regret about his career, it is that he didn’t play enough games in the top flight.

“I think I was good enough to play more,” Kilgallon says.

The one regret he doesn’t have, however, is fulfilling his childhood dream by playing for his cherished Leeds United.

This interview was originally published in May 2020.