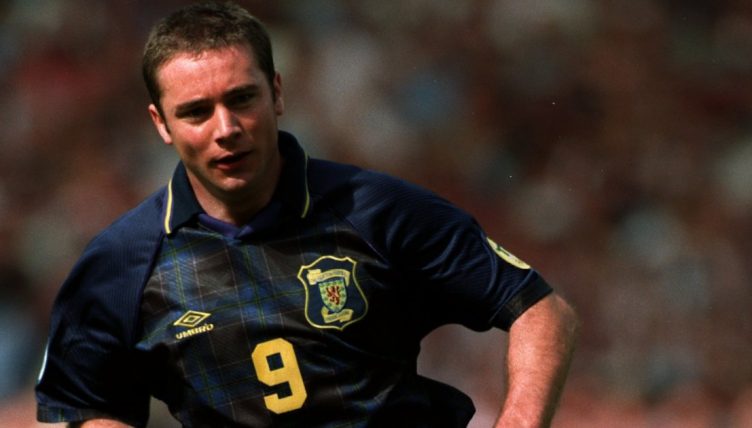 Local derbies are something of a rarity on the international stage, which ensured the meeting between England and Scotland at Euro 96 meant so much more.

The 10-year gap between the 1996 meeting and the previous clash between Scotland and their ‘Auld Enemy’ was primarily due to the hooliganism that brought an end to the annual meetings between the two nations, with police putting a halt to a fixture that saw thousands of Scots descend on London and ugly scenes that made front rather than back page news.

So there was a sense of trepidation as the two oldest rivals in the game were paired together in the group stages of the 1996 European Championship finals, with hosts England welcoming Craig Brown’s Scotland to Wembley on a warm June afternoon.

After draws in their opening two matches against Switzerland and Holland respectively, it was all to play for as England and Scotland did battle in a game that could decide their Euro ’96 fate. The occasion did not disappoint.

An opening goal for England from Alan Shearer put the hosts ahead in what had been an evenly contested battle. And when Tony Adams pulled down Gordon Durie in the box, Scotland had their chance to draw level from the spot.

What followed is a minute of football madness that has been indelibly etched into the game’s folklore. Gary McAllister saw his penalty saved by David Seaman and a minute later, Paul Gascoigne scored his famous match-clinching goal as he lobbed the ball over Colin Hendry and fired past Andy Goram, cementing the game’s legacy.


For former Scotland striker Ally McCoist the occasion brings up mixed emotions, which are still fresh some 25 years later.

“While I look back on it with regrets, I also reflect on the match and especially the occasion with some fondness,” McCoist, who was on the Scotland bench that day at Wembley, says at a Green King Pubs event.

“England and Scotland had not played each other in a long time and it was a memorable day at Wembley, where the atmosphere somehow felt different.

“The noise that day was just fantastic and in a year when we have seen so much football without fans, you have to remind yourself what a difference they make on days like that.

“You could sense that people realised they were witnessing something special and even to this day, Euro 96 is a tournament people talk about.

“So while I look back on it with regrets for obvious reasons, I also reflect on the match and especially the occasion with some fondness.”

England’s win against Scotland propelled them towards the semi-finals of the competition, with current manager Gareth Southgate infamously missing the crucial penalty in the shoot-out defeat against Germany, with McCoist suggesting the tournament represented a golden chance for both England and Scotland to create history.

When England beat Scotland at Euro '96 with Gazza scoring that famous goal. pic.twitter.com/yymCwjpaWD

“It was a massive missed opportunity, there is no getting away from it and no Scotland fan will ever forget it,” he continues.

“This is not a case of sour grapes because the second goal from Gascoigne was genius, but when you look back at the game, you will see that we were the better team for long periods in the game against England and could have come away with at least a draw.

“We played so well in the first half of that match at Wembley and I remember at half-time thinking we were well in the game.

“England had an interesting, shall we say, warm-up to the competition with all the headlines they created on a night out in Hong Kong prior to Euro 96 and then they started the tournament with a draw against Switzerland, so all the pressure was on them as their media were on their backs.

“They went into the game against us needing a win and we thought that if we could keep them quiet for 45 minutes, the nerves would kick in.

“We did that, but then they went ahead through Alan Shearer just after half-time and then we had a chance to draw level with the penalty. Unfortunately, Gary McAllister missed it and a few seconds later, Gascoigne had his incredible bit of magic and it was all over.”

We can’t wait to welcome customers back to our pubs to watch this summer's football. It’s been a long year to wait and we’re so excited to be cheering on our home nations.

England and Scotland will rekindle their enduring rivalry in this summer’s European Championships and McCoist believes the game might not be as one-sided as the oddsmakers suggest.

“Man for man, England are clearly a better side as this is the best set of players they have had in a long, long time,” added McCoist.

“I think they will be one of the most talented teams taking part in the competition, but that kind of suits us. We are better as the underdogs and we are just so pleased to be in the tournament.

“Expectations at this moment in time are relatively low, but once kick-off happens in the first game, everyone in Scotland will be hoping we can qualify and certainly believing we can pull off a result against England.”

Ally McCoist, Ashley Williams and Jamie Redknapp represent each of the participating home nations in Greene King’s Euros campaign. As “your home of pub sport”, Greene King will be showing games at more than 1,000 pubs, celebrating the return of international football. Secure your seat at: https://www.greeneking-pubs.co.uk/euro-2021.

Ryan Gauld: Scotland’s ‘mini-Messi’ has shrugged off the hype in Portugal