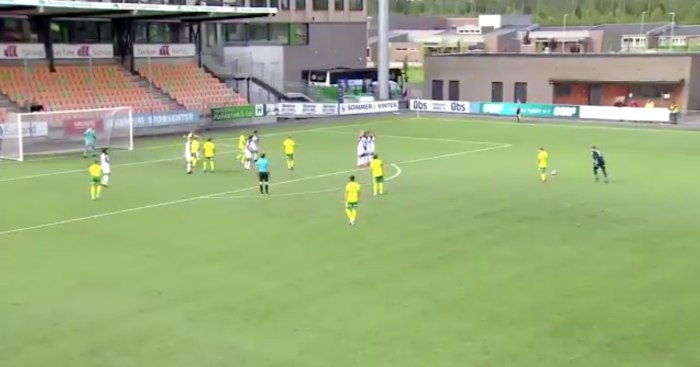 There were incredible scenes in the Norwegian first division this week as goalscoring goalkeeper Stefan Hagerup rescued a point for his side with a stunning free-kick.

Ullensaker/Kisa IL were 2-1 down to Jerv on Monday when the home side were awarded a foul on the edge of the area in the 80th minute.

Goalkeeper Hagerup stepped up to take the set-piece and didn’t disappoint, brilliantly tucking away his first free-kick of the season.

“We were down 2-1 and we needed a goal,” says the 26-year-old. “I thought it was not too far from the goal. Before the game we already know that if I want to shoot a free-kick from a shooting position, I can decide myself if I want to shoot or not.

“When I get a chance, I just try to make the most of that chance. Sometimes you miss, sometimes you score. It’s good to take off some pressure by already scoring a goal with my first free-kick of the season.”

Ullensaker/Kisa are 2-1 down to Jerv with 10mins to go.

That’s his 2nd for the club now! pic.twitter.com/D6PilVqh71

For many, letting your goalkeeper take free-kicks would seem like a risk not worth taking, but as Hagerup explains, it is all thought through.

“That’s what most people think but if you think about it, most teams have to put four guys in a wall. That’s four guys gone already. Then they have to put some more guys to protect their goal, marking our guys. They put five there so that’s nine people gone already and they might put one guy up.

“But we have very good control, we already talked about this. If I hit the wall and the ball will drop very close to their players, one of our guys will come up and make a tactical foul or kick the ball away or something like that.

“We have good cover at the back. It’s very far from our goal as well. I don’t think that anyone could just shoot the ball straight from that position to our goal. A lot of things have to go wrong for that to turn into a big chance for the opposition team.”

Such tactics only work with the full backing of the manager, and that is exactly what Trond Fredriksen provides at the club.

“He’s the guy that pushed for me to shoot,” Hagerup says. “He gave me the opportunity. The opportunity has always been there in my mind. I know I can shoot free-kicks. I have proved that to other coaches before but they didn’t want to take advantage of that opportunity.

“We got a new coach last year [Fredriksen] who decided that he wants to try this out. He put big trust in me for going up but he also knows that the reward can be very big.”

This was Hagerup’s second goal in as many seasons for Ullensaker/Kisa IL. The keeper netted a free-kick last season which helped his side to a dramatic 2-1 victory over Skeid.

“Last season when I scored, we were also down 1-0 but at the 88th minute. I scored a free-kick and we scored one more goal after to win the game. It gave us three points from this game when we were struggling to create big chances. It gave us a big reward in this game.”

🇳🇴 When your goalkeeper thinks he’s Lionel Messi…then it turns out, he is.

It’s a case of practice makes perfect for the goalie who continues to work on his finishing abilities as well as his main defensive duties.

“As with all things, if you’re going to get good at something you have to practice,” he says. “I have some repetitions where I just kick the ball and try to get a good feeling.

“The day before the match [against Jerv] I kicked maybe 20, 25 times and I didn’t hit one. But you know, it doesn’t matter, the one thing that matters is that you hit when it matters.”

Rogerio Ceni is arguably the most famous goalscoring goalkeeper with 131 goals to his name for Sao Paulo. Paraguay’s Jose Luis Chilavert is second on that unique list with 67.

“I have noticed these guys, I noticed that they scored goals and it’s cool because no many goalkeepers do that – it’s very rare,” Hagerup says.

“But from my early days when I started to play, I was always good at shooting. I always had a strong kick. I can kick hard and accurate. So, through the years I just practised a lot of kicks and long passes. The more you practice the better you get at it. You can say it has paid off.”

Hagerup and his team-mates are targeting a play-off place this season in the second tier of Norwegian football.

The goalkeeper has already saved a point for his side this season and he’ll be hoping to save a few more as the team eyes a future place in the country’s top division.